Spoilers ahead for the Star Trek: Discovery season 3 premiere

It was clear by the end of Star Trek: Discovery’s second season that the show was about to undergo the most dramatic narrative leap of any Trek show in history. While leaving its charismatic new/old characters like Captain Pike and Spock behind to spinoff on their own adventures, Discovery would leap forward from its quasi-prequel timeline and into the distant future. After much anticipation, season three is here to show us just what that future will hold for its crew, and for fans.

After a brief mysterious intro, reminiscent of the hatch from Lost, we rejoin Michael Burnham (Sonequa Martin-Green) in the thick of it, literally bursting through the walls of the universe in her time suit from the finale of season two. As her suit collides with the future in the form of a ship, Michael repeatedly shouts for a full system reboot. It’s hard not to interpret that as a fourth-wall-breaking reference to the fact that Discovery itself is performing a hard-reboot on its own premise as a show.

By the end of the opening sequence, Burnham sends her suit back in time to close off the time travel loop with the last of the red signals. (We saw this sequence from her brother Spock’s point of view at the end of season two.) As Burnham orders the suit to self-destruct once it arrives in the past, the show effectively jettisons all ties to the stories of the first two seasons. Burnham, repeating her name rank and serial number to herself, compels herself to walk, to continue moving forward.

While we’re almost certain to catch up with Saru, Tilly, and the rest of the crew of the U.S.S. Discovery in the next episode, the premiere chooses instead to affix its eye on Burnham. Michael leads the audience through an infodump disguised as a fetch quest with a smuggler—sorry, “courier”—Book (series newcomer David Ajala). The year is 3188. A cataclysmic event called “The Burn” has undone centuries worth of galactic travel advances and all but erased the United Federation of Planets from existence. The only trace of the intergalactic diplomatic body that remains is a patient man, doing his multi-generational due diligence on an abandoned space station, just waiting for a signal. 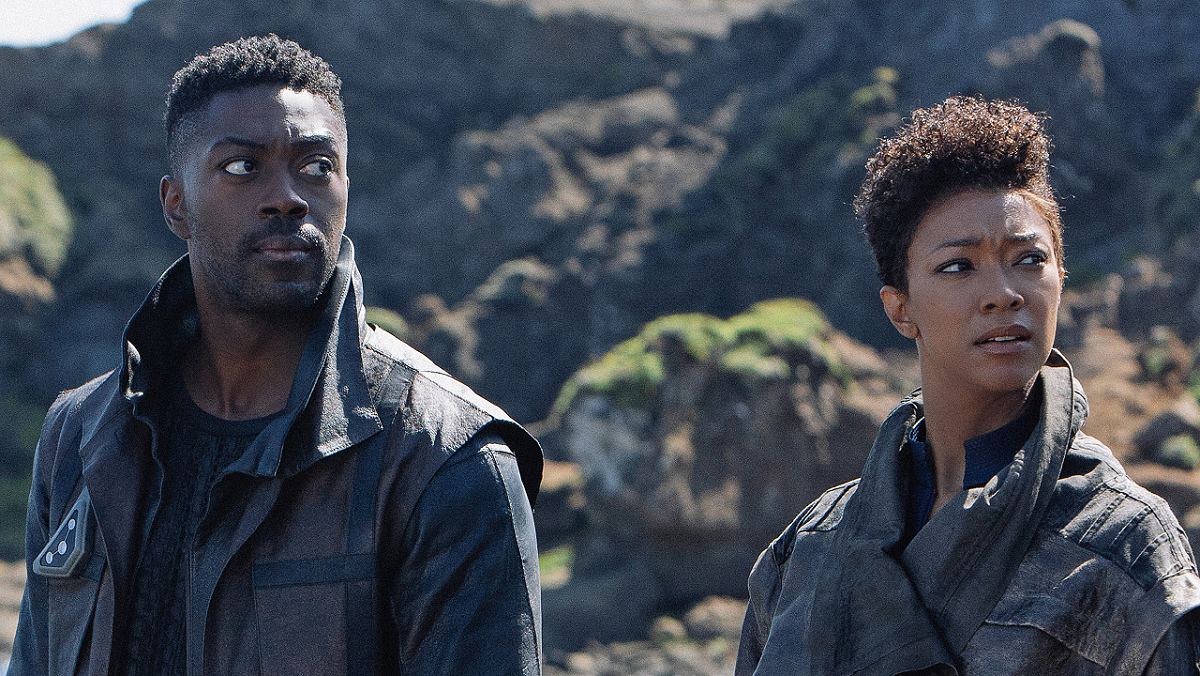 The easy, knee-jerk reaction to this particular plot point might be one of frustration. An often expressed criticism of the modern Trek shows concerns a tonal shift into darkness. Note the war-torn Federation of Discovery’s first season, and the isolationist ( and genocidal at worst) aspects of Picard. But then there’s Michael.

Michael plainly states, “The Federation isn’t just about ships and warp drive. It’s about a vision, and all those who believe in that vision.” While we may be two seasons and 930 years away, that moment serves as a direct throughline to the Michael Burnham of the first season. She who stood at the precipice of a victory in the Klingon-Federation War and insisted that if they followed through with their plan to destroy the Klingon homeworld of Qo’noS, they would lose themselves in the process. The same Burnham who made the choice in season two to lead herself and her ship into the future, abandoning the world they knew in order to preserve life in the universe.

There is so much light to be found even in this introduction to a galaxy at its most downtrodden. The show has picked up a little of Lower Deck’s humor in the mundane aspects of its futuristic life. A comedic sequence involving Burnham and some truth gas serves as a perfect cover for a plot refresher, reminding the audience of season two’s arc. A final sequence involving the aforementioned “hatch” watchman couldn’t be more obviously designed to pull at the heartstrings. But it succeeds in doing so all the same.

For multiple Trek shows, the Federation has served as a shining example. The bright city on a hill that mankind could strive for. This newer generation of shows, written by those largely inheriting the world from the stories they were inspired by, have a unifying new vision that the Federation is more than just a utopian goal, but an important ideal to strive for. Taking their cues from stories like the Dominion War arc of Deep Space Nine, this next generation has taken a hammer to the Federation. Not to destroy it, but to show that for those like Michael Burnham and her crew, it can never truly be broken. Book refers to her as a “true believer,” first with cynicism, but later with a nod of respect.

The Federation of previous Trek shows is an important one. Those stories’ places in the pantheon of television and film are not to be discarded or forgotten. But in the way those that came before allowed us to imagining such a future for humanity, maybe these new stories can help us to imagine we can actually build it.