Your friendly neighborhood Spider-Man swings into theaters this December 14 in the hotly anticipated animated feature film,Â Spider-Man: Into the Spider-Verse. As the title suggests, this movie offers us more spider-powered superheroes in one place than we’ve ever seen before on the big screen. While we absolutely loved the movie and geeked out seeing characters like Spider-Gwen, Spider-Man Noir, and Spider-Ham in one place, we couldn’t help but want more. So we sent our number one Spider-Fan, artist extraordinaire and host ofÂ  Animation InvestigationÂ Hector Navarro to sit down with stars Jake Johnson, Shameik Moore, Brian Tyree Henry, Lauren Luna Velez, and producers Phil Lord and Chris Miller to create originalÂ Spider-Verse characters before our very eyes.[brightcove video_id=”5976990909001″ brightcove_account_id=”3653334524001″ brightcove_player_id=â€œrJs2ZD8xâ€]In order to generate these characters, Hector came armed with a sketch pad, some markers, and a cup full of movie genres for theÂ Spider-VerseÂ cast and crew to randomly select. Then, based on their suggestions, Hector generated some deeply strange and unexpectedly cool creations. To help stoke their creative juices, Hector prepared two sample pieces: 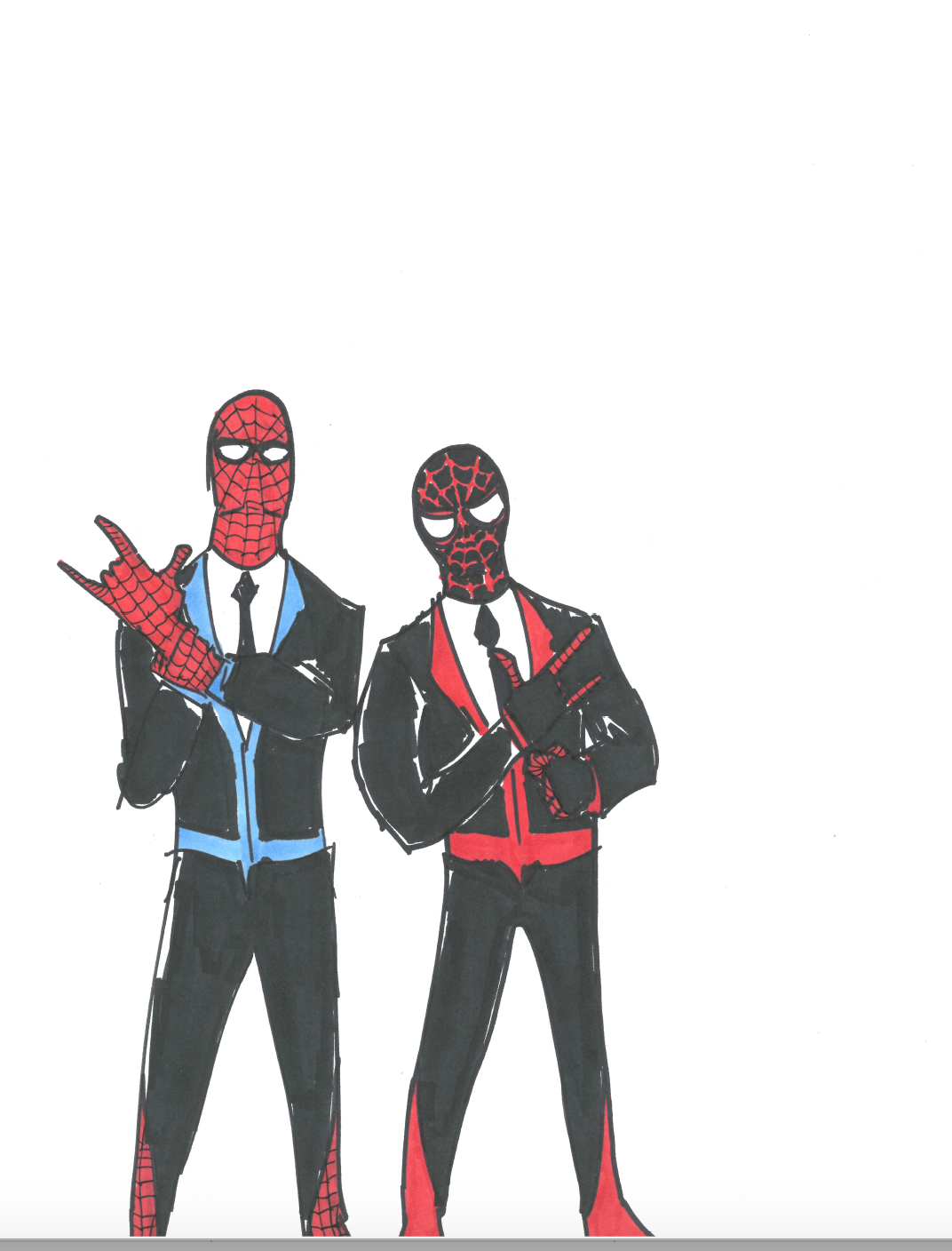 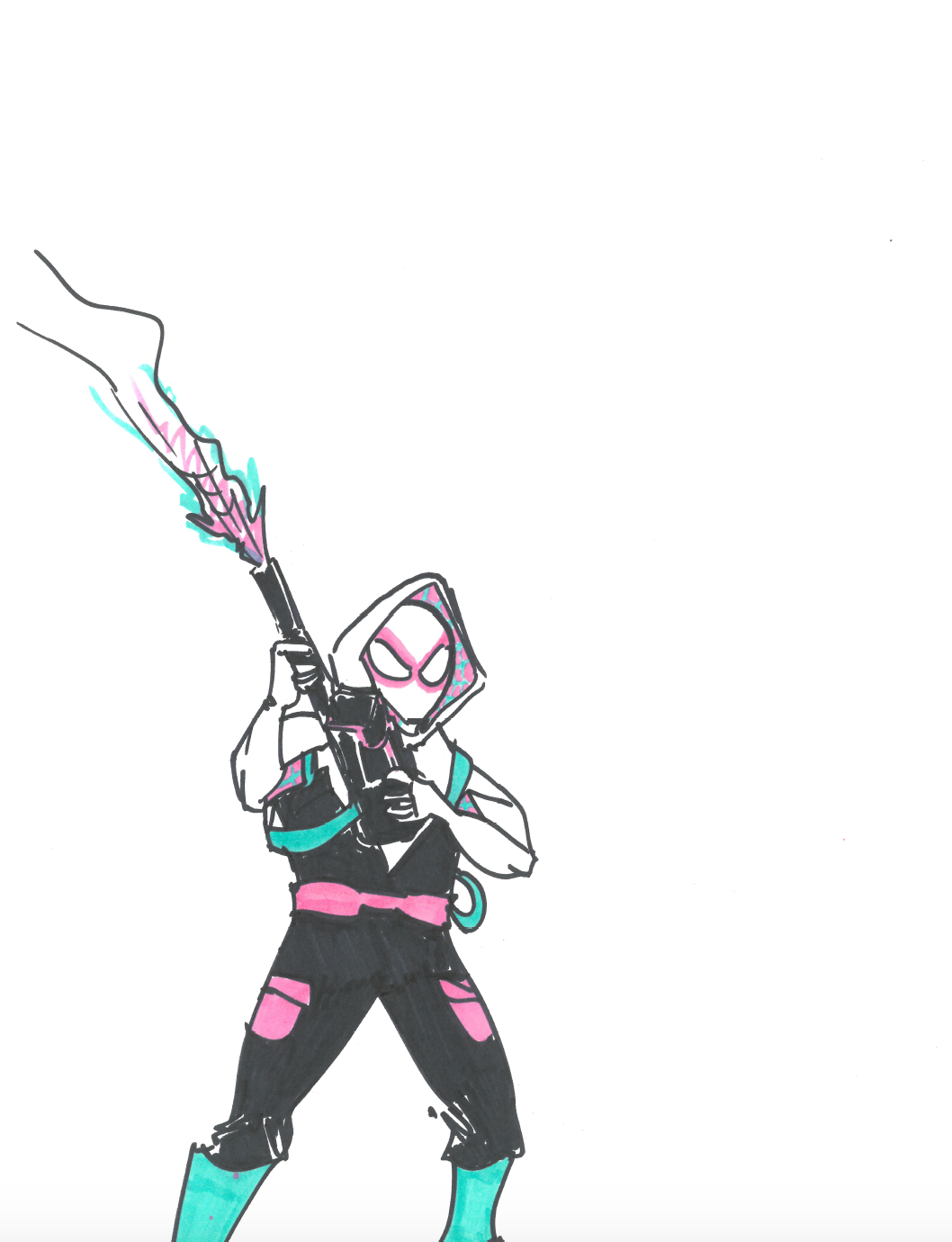 And here is what the cast and crew came up with:Shake-JorÂ 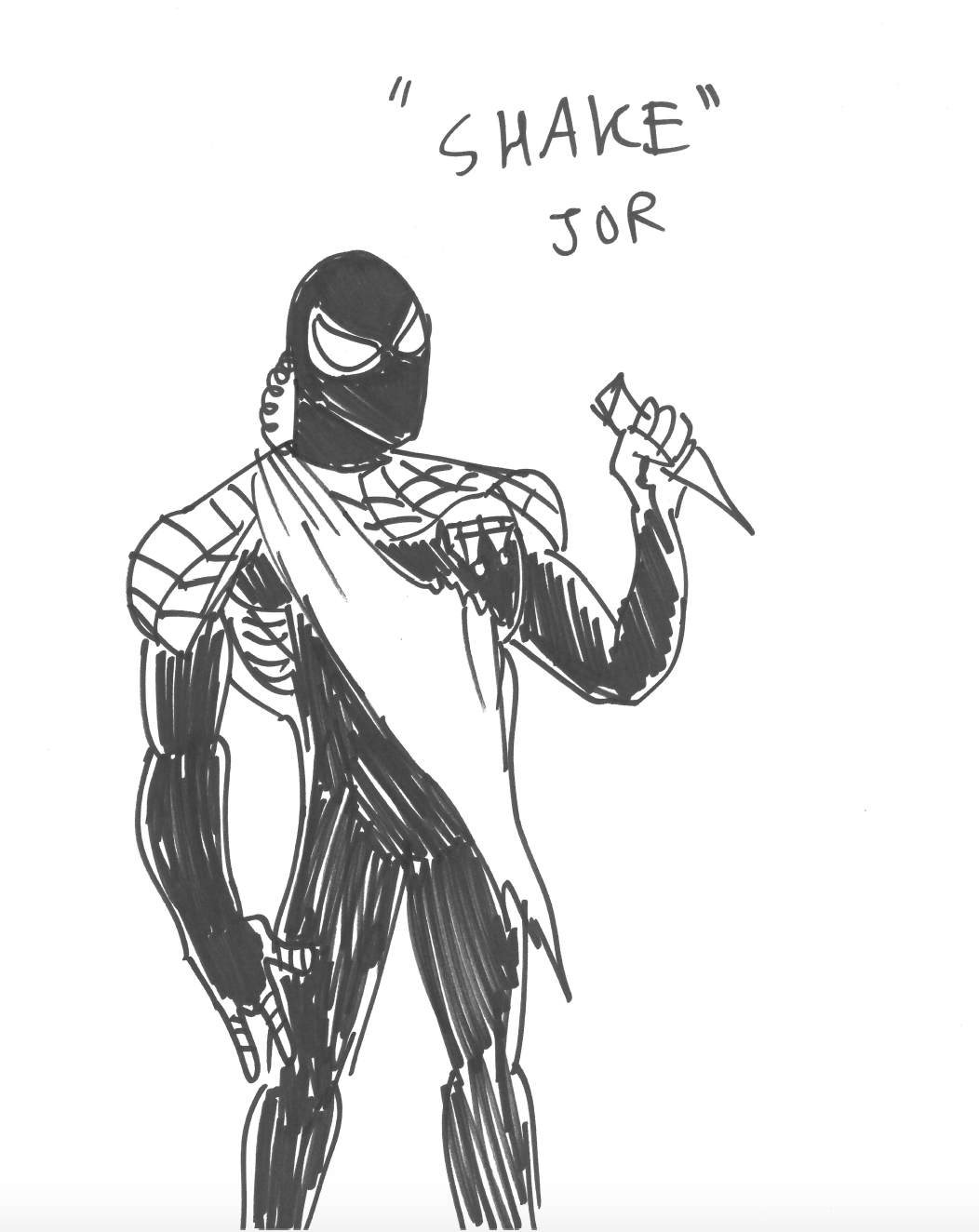 Equal parts secret agent and crusader against supernatural forces, “Shake Jor” is the brainchild of Peter Parker and Miles Morales themselves, Jake Johnson and Shameik Moore, respectively. Drawing a combination of “spy movie” and “fantasy,” they came up with this stabby-chic, web-covered superspy. 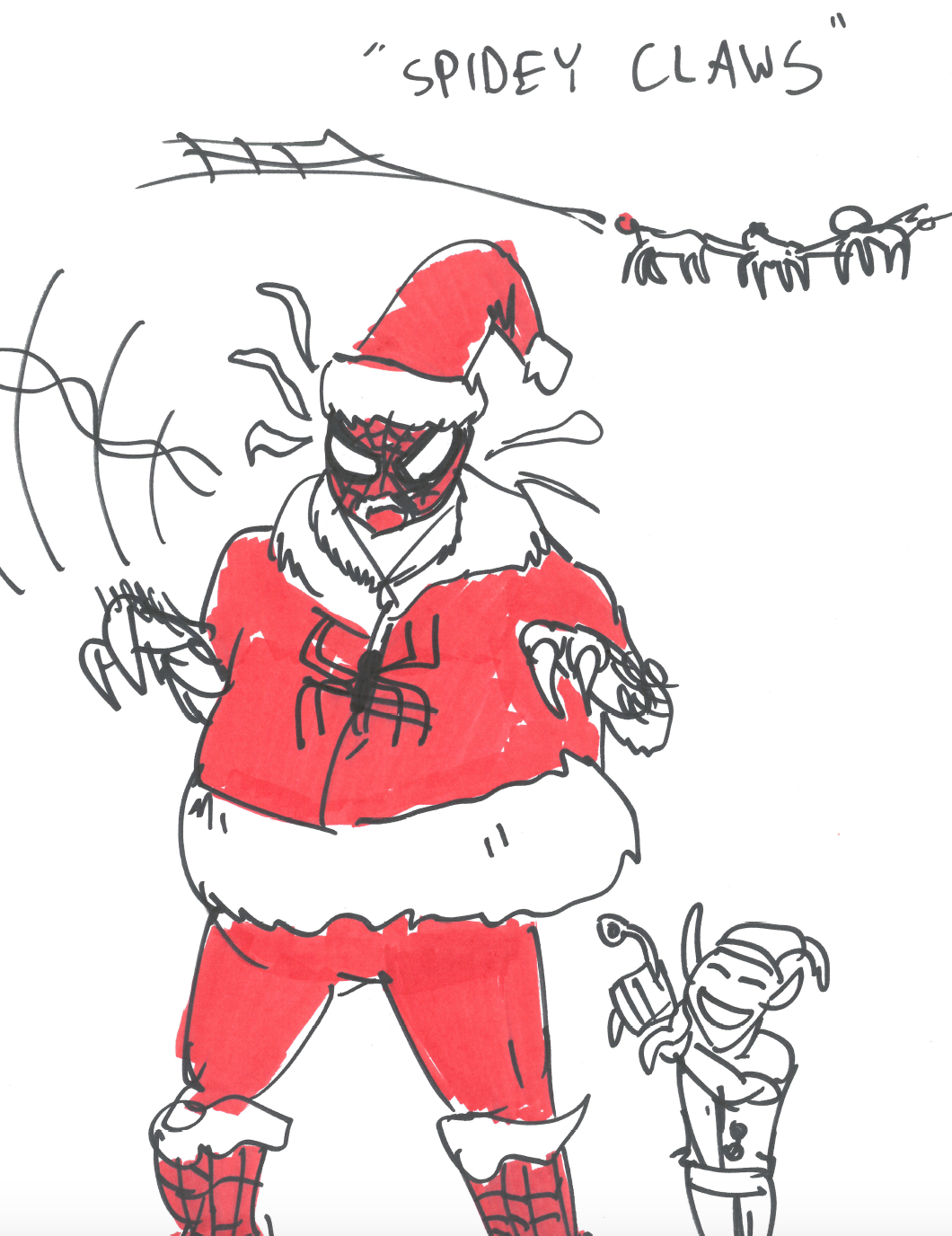 Ho ho holy smokes. From the twisted minds of Phil Lord and Chris Miller comes this unholy union of Christmas movie and dinosaur movie: Spider Claus. With a little elf helper, feathered raptor claw hands, and eight-legged reindeer that can shoot their own webs, Spider Claus was bitten by a radioactive ice spider at the North Pole. Oh, and he can control time too for some reason. 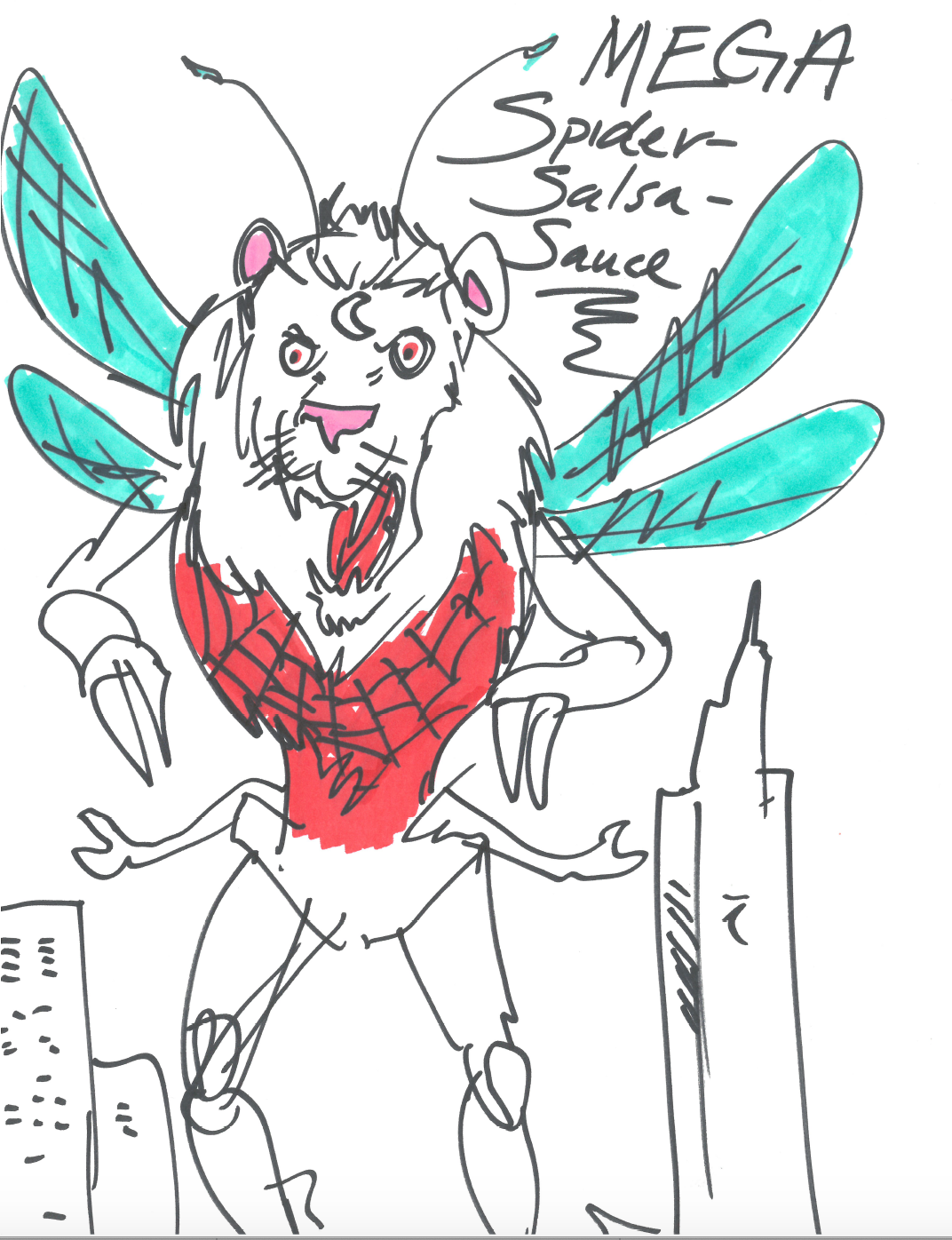 Will Smith once famously proclaimed that parent’s just don’t understand, but Brian Tyree Henry and Lauren Luna Velez, who portray Miles Morales’ parents inÂ Into the Spider-Verse clearly understood their assignment. The result of their session with Hector is a lion-headed, insect-winged kaiju creation that definitely seems like more foe than friend.And there you have it! Three amazing new additions to theÂ Spider-VerseÂ canon that we fully expect to see in the already announced sequel. Special thanks to Hector Navarro for his artistic prowess and to the cast ofÂ Spider-Man: Into the Spider-Verse for being such good sports.Which of these original characters is your favorite? What would your original Spider-Man character be called? Let us know in the comments below.