From the moment Thanos snapped half of the MCU out of existence, we knew many of his victims would return. And thoughÂ the first teaser forÂ  Spider-Man: Far From HomeÂ proves that Peter Parker and Nick Fury will indeed be back, it alsoÂ has us worried about what kind of world they will return to. It looks like one in desperate need of superheroes, and we don’t like what that might mean for Avengers: Endgame.

First off, the most unexpected part of the Far From Home teaser is just howÂ “normal” everything feels. No one seems to be recovering from a traumatic experience, even though half of everyone in this reality was recently (and we know it was recent from Peter’s age) turned into existential ash. Compare that to how Tony Stark was still dealing with the fallout from the first Avengers years later.Since Peter and Nick Fury are back in the flesh, we know the surviving Avengers must have undone the Snapture in EndgameÂ (which will take place, and come out, beforeÂ Far From Home). But this trailer makes it look like they’ve pulled off a total reboot of the timeline where no one remembers Thanos making them disappear.Of course, the Avengers themselves are nowhere to be found in this trailer. And we’re assuming the worst.
via GIPHYA big part of this teaser involves Nick Fury recruiting Spider-Man, whom he says he has never met, to work with him. “You got gifts, Parker, but we have a job to do,” he says. The threat to Venice and the world seems massive, since it involves apocalyptic skies and giant water monsters who might be extra-dimensional immortals. So why enlist young Peter instead of his usual team?Perhaps Peter’s school trip has simply placed him at the wrong place at the right time. Fury certainly keeps tabs on Earth’s heroes are at all times, so this could just be a convenient coincidence. ButÂ that sinking feeling only get darker when Happy tells Peter he is “all alone.”Â It seems unlikely that Tony Stark, what with his ability to zip around the globe in his Iron Man suit, wouldn’t be able to step in and lend a hand, nor would he ever leave Peter all alone. 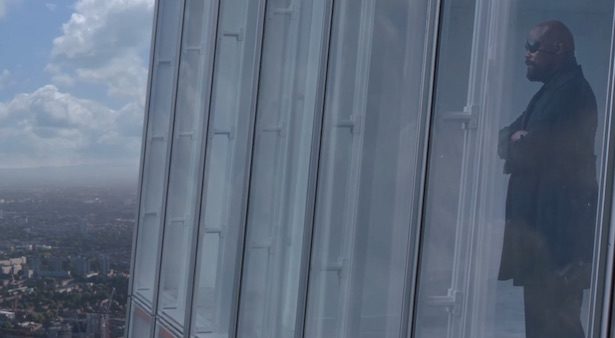 Suddenly Nick Fury asking Peter if he’s “going to step up or not” feels much bigger than just one battle; it sounds like Fury is recruiting Spider-Man because there’s no one else to call on. It’s as though the world has lost most, if not all, of its Avengers, possibly because they had to make the ultimate sacrifice to change the timeline and stop Thanos’ Snap from ever happening.That would also explain why Jake Gyllenhaal’s Mysterio shows up in such heroic fashion. He looks like he has super powers, but from what we know of the comic book character, he’s just a stuntman and special effects genius who wants to be famous. A world desperate for new superheroes would be an amazing opportunity to use his skills to achieve his dream. A little razzle, a lot of dazzle, a well-coifed beard, a great head of hair, and a handsome face is a perfect recipe for presenting yourself as the world’s newest and greatest savior in lieu of actual powers (a la Syndrome in The Incredibles). 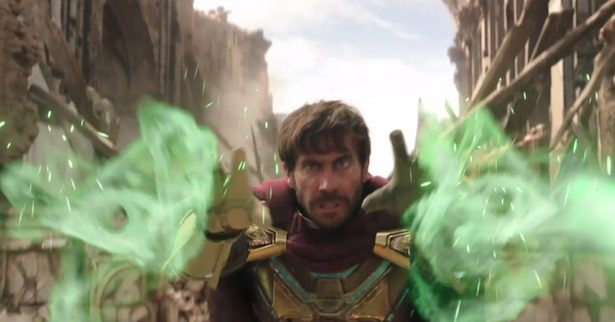 This is a dark reading of what is generally a bright trailer, but it’s not the only evidence Tony and the rest of the Avengers are gone. That giant check Happy is holding is signed by Pepper Potts, not Tony.

Also, Spider-Man swings by the old Avengers headquarters near Grand Central Station in New York City. Why is it under construction? Is it being torn down to take away a painful reminder? Or is it being converted into a monument to the fallen heroes?

Bad news for Avengers Tower – It’s either being torn down or renovated. pic.twitter.com/E432Z1BFal

We don’t know, and until we see Endgame and learn how the Avengers managed to change the timeline and fix the world it’s just speculation.What we do know is the signs point to them saving a world they are no longer a part of.