What Will Happen to Spider-Man After FAR FROM HOME's Final Scene? - Nerdist

What Will Happen to Spider-Man After FAR FROM HOME’s Final Scene?

Spider-Man: Far from Home may feel a little “smaller” than some of its fellow Marvel films (especially its immediate predecessor), but it actually packs one of the most shocking post-credits scenes in the entire history of the MCU. Not only does it close out Peter’s latest adventure with a big twist, it majorly shakes up his role in the Marvel-verse going forward. And we’re not quite sure what’s going to happen next.

After Peter Parker has defeated Mysterio at the climax of Far from Home, we cut to a news report from none other than J. Jonah Jameson. He is played once again by the actor who portrayed him so perfectly in the original Sam Raimi films: J.K. Simmons. Not only does he (falsely) report that Spider-Man was behind the attacks throughout Europe, but he publicly unmasks Spider-Man as Peter Parker!

Goodbye, secret identity. Now everyone knows the truth. Peter’s life as he knew it is over.

But is there a precedent for Peter Parker being unmasked to the public like this in the pages of the comics? Actually, Peter Parker being unmasked has happened quite a few times over the past 50 years. Although only a few of those times was his secret actually revealed to the world at large. Here’s a brief history of Spider-Man revealing his secret identity as Peter Parker, and the almost always disastrous results that followed.

When Spider-Man’s enemies found out 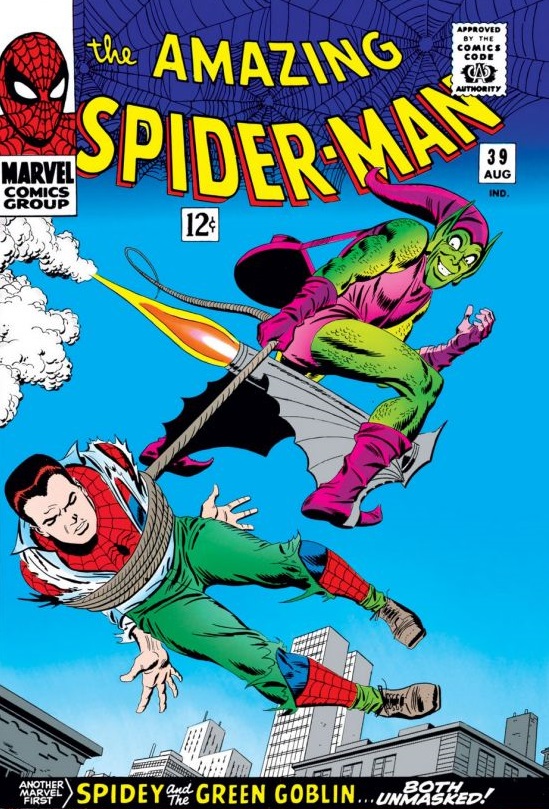 There have been several times when Spider-Man has been unmasked by one of his enemies. The most notorious villain who found out the truth was the Green Goblin, who discovered his secret and then did a lot of damage to Peter’s life. Most famously: once he found out that Gwen Stacy was Peter’s girlfriend, he murdered her.

After Goblin, Peter’s secret was discovered by other villains over the years like the Jackal (who famously cloned him), along with Venom, Chameleon, and Kraven the Hunter. Black Cat (who started out as a villain, but eventually became Peter’s ally and love interest) found out his true identity too. Once he knew the truth about Peter, Venom stalked and terrorized Peter’s then-wife, Mary Jane, and Chameleon nearly sexually assaulted her. Another time, Kraven was able to get the jump on Peter and ended up burying him alive. As for Black Cat, she was attracted to the “sexy and dangerous” Spider-Man, but after finding out he is really ordinary Peter Parker from Queens, she dumped him.

For various reasons, most villains have chosen to keep Peter’s identity to themselves. The exception to that was Doctor Octopus, who learned the truth about Peter after having become convinced Parker wasn’t Spider-Man years before. Otto’s mind occupied Peter’s body for a long time after a time when Peter seemingly “died.” Doc Ock implanted his consciousness into Peter, and decided to take over his life to prove he’d be a better hero. He then became the so-called “Superior Spider-Man,” and attempted an ill-fated heroic career.

J. Jonah discovered the truth once as well, only to get convinced by Peter that he’d been subject to a hoax.

When Spider-Man’s friends and family found out 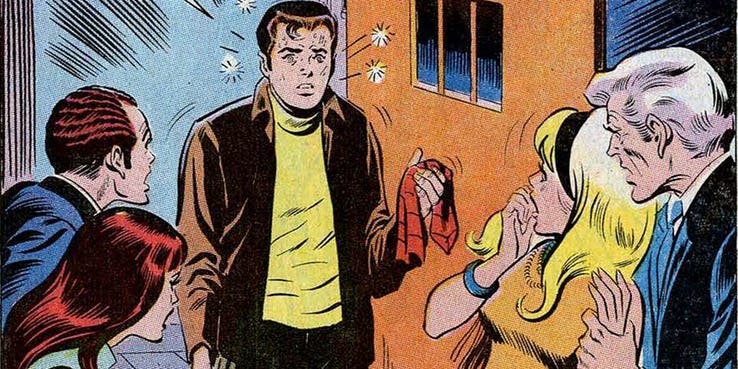 Much of Peter’s inner circle eventually found out the truth about him. The first time he revealed himself to his friends he was deliriously ill and de-powered. Peter told his friends that he was done with being Spidey and unmasked himself to them at a party. Among said friends are his girlfriend Gwen Stacy, Mary Jane Watson, Harry Osborn, and Gwen’s dad, Captain Stacy. Although they were initially shocked, many had had their suspicions, and even recalled when Peter was unmasked by Doc Ock years before. However, Peter later came to his senses, and passed it all off as a joke.

All of those same friends eventually found out the truth anyway, though. A couple of Peter’s girlfriends, Debra Whitman and Carlie Cooper, also found out… and neither romance ended well as a result. Debra suspected Peter was Spider-Man for a long time, which he denied. When she did find out, it caused her to be rightfully angry at the months of lies he’d told her. She even pitched a book called TWO FACED: How Spider-Man Ruined My Life. Carlie Cooper was once turned into a Goblin creature due to her romantic association with Peter, and ended up in a support group for the loved ones of superheroes.

Peter also once told a young fan with terminal cancer his secret in a touching story. (At least that kid wasn’t hurt by the knowledge of Peter’s true identity.) And although it took forever, his Aunt May finally discovered his secret in the early 2000s. She knew he’d been hiding something, but she just thought that he was secretly gay! 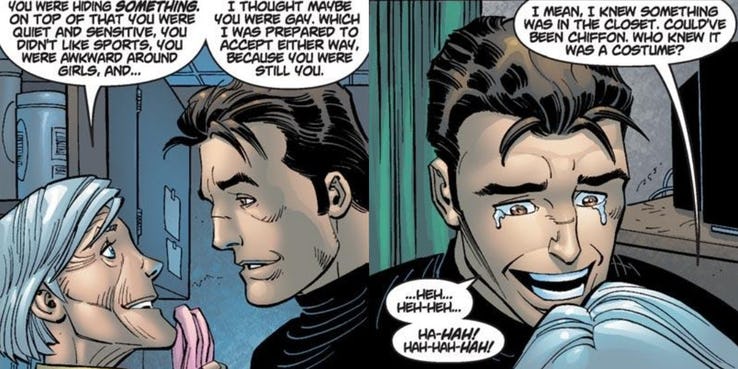 Meanwhile, almost all of Peter’s fellow heroes in the Marvel Universe know his secret at this point—at least all the major ones like the Avengers, the Fantastic Four, Daredevil and the X-Men. All except for Deadpool, who was left out of that particular group text. Poor Wade.

When the whole world found out 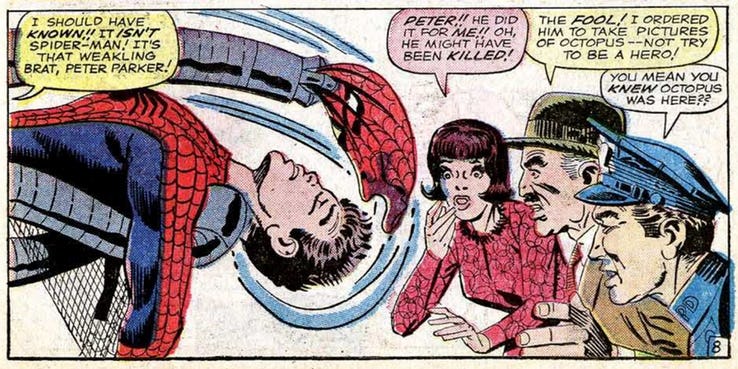 The first time Spidey was unmasked to the public as Peter Parker was thanks to Doc Ock, way back in Amazing Spider-Man #12. Many friends and co-workers saw Doctor Otto Octavius unmask Spider-Man in public, but none believed that scrawny and nerdy Peter Parker could really be Spider-Man. It didn’t help that Peter had temporarily lost the use of his powers, so he couldn’t perform any amazing Spider-feats. After that, both Otto and Peter’s friends believed they’d been punk’d.

The biggest unmasking was ultimately done by Peter Parker himself. In the 2006 comic book event series Civil War, all of Earth’s heroes were asked to register with the U.S. government after a superhero-induced tragedy caused several casualties. Tony Stark convinced Peter to register for the greater good of the heroic community. In a big public press conference, he unmasked himself to the entire world. 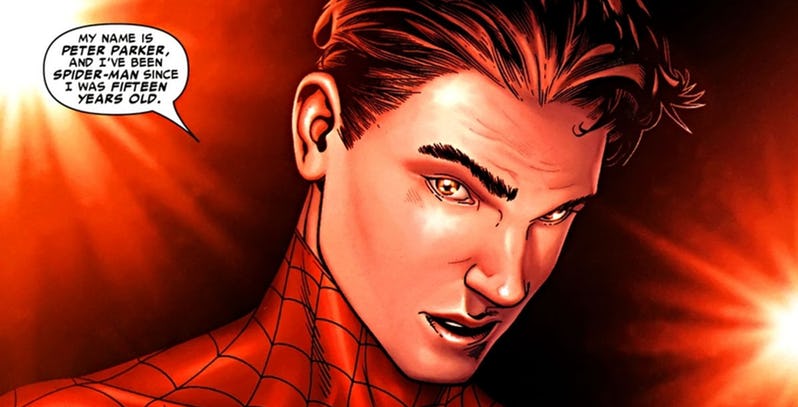 Eventually, all of Peter’s worst fears came true. As revenge for years of defeats, the Kingpin went after Peter and his family. A bullet meant for him hit Aunt May instead, landing her in a coma. Peter moved heaven and Earth to save his beloved aunt, and ultimately the demonic Mephisto helped him… at a price, that being Peter’s own personal happiness: Mephisto warped time to save Aunt May from the bullet, but also made it so that Peter’s marriage to MJ never happened.

However, MJ demanded that if she agreed to this deal with the devil, that Peter’s secret identity be restored as well and that no one remember who he really was. The mechanism by which Peter’s secret was restored was a complicated combination of a spell from Doctor Strange making the world forget, and Reed Richards and Tony Stark coming together to essentially scrub out the world’s databases of Peter’s big reveal. Ultimately, the fallout of Spidey sharing his secret resulted in the biggest walk back in Marvel history this side of Jean Grey not really having died in The Dark Phoenix Saga.

Will the MCU Peter have it just as bad as comics Peter post-reveal? We don’t see Doctor Strange waving his wand to make everyone forget in the movies, but anything is possible. We could now see MCU Spidey go in a direction his comic book counterpart never went in, and it’s definitely got us excited about the possibilities.