The Radical Reimagining of INTO THE SPIDER-VERSE'S Aunt May - Nerdist

The Radical Reimagining of INTO THE SPIDER-VERSE’S Aunt May

Aunt May has long been an integral part of Spider-Man lore. In fact, she was introduced in Amazing Fantasy #15 just like Peter Parker himself. One of comics’ longest-standing matriarchs, she’s been there through thick and thin. And just like Spider-Man, May has been through a number of different iterations. Her newest incarnation appears in the incredible animated adventure, Spider-Man: Into the Spider-Verse, and it offers up a brilliant, refreshing vision of Aunt May unlike any we’ve ever seen before.Originally, Aunt May was the older caregiver who raised Peter alongside her husband Ben after their young charge’s parents died. Her character design by comics icon Steve Ditko sported greying hair and a wrinkled face. May has, like so many other female characters throughout history, played into all three of the classic tropes of the Mother, the Maiden, and the Crone, with her earliest rendering very much fitting into the mold of the Mother. 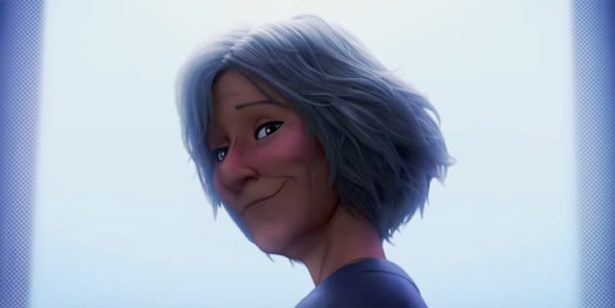 Over her 56 years, May has often been more of a passive part of Peter’s life, though she’s also been the driving force behind many of his decisions, especially the one to keep his double life a secret. Over her tenure as one of comics’ residing figures, a few brave creators have tried to reinvent her with some having more success than others. One of the better versions of Aunt May was the short lived Spider Ma’am, who was introduced in 1980’s What If #23 by Herb Trimpe and Peter B. Gillis. In the short story, the creative team imagined a world where May was the one who was bitten by the radioactive spider, giving her the powers that were more commonly recognized as those of her grandson Peter Parker. It was refreshing to see an older woman put on the mask, but unfortunately it was short-lived.A less successful attempt came from Mark Millar and Terry Dodson, and was widely derided after fans balked at the creepy comic. Conceived by misguided Marvel bigwigs Bill Jemas and Joe Quesada, Trouble told the story of a teenage Aunt May and her “friend” Mary, and for some reason focused entirely on the sex lives of the two juvenile girls. Marketed as a romance comic, the title became instantly notorious for its terrible sexy teen girl photo covers, which have since become a joke collectors item because of just how bad they are. It also added the controversial and now trashed retcon that Aunt May was inexplicably Peter’s mother after a dreadful teen pregnancy storyline which saw Uncle Ben impregnate her. We guess that Trouble 2: More Sexier Trouble would’ve been a time travel story explaining how Ben and May aged 50 years. Luckily, we’ll never have to read it. 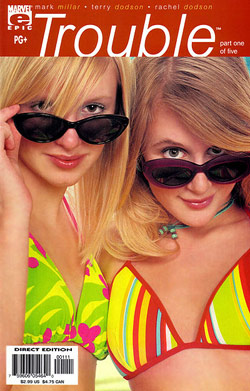 Post Trouble, May has mostly stayed as the older matronly mother figure, though of course Spider-Man: Homecoming changed those expectations by casting Marisa Tomei. Though that’s a cool diversion from the classic character, we’ve yet to really get to know that version, whereas Into the Spider-Verse gave us a May who was so enchantingly engaging and well-rounded that fans are already begging for more of her in the already announced sequel.One of the smartest moves that Into the Spider-Verse makes is that it positions Lily Tomlin’s May as someone who’s well aware of the dangerous life that her now deceased nephew chose to lead and is clearly incredibly proud of his choices. This May seems to take some nods from the Ultimate comics that spawned the film’s lead, Miles Morales. In that story, she learned of Peter’s dual life during the Clone Saga, but was never as much of an active part of it as she is in the movie version. It’s so refreshing to see Aunt May as a hero, someone who embraced Peter as Spider-Man come what may, and it’s even more wonderful that we get to see her take on the role of a mentor to the new Spider-folks in her life.Whether it’s offering up a home base for the multi-dimensional heroes or providing Miles with his first proper Spider-suit, Into the Spider-Verse’s May plays a vital part in saving the world and it feels radical. We can’t wait to see her return in the yet untitled sequel, and maybe even get some Spider-powers, which, by the way, Lily Tomlin would love!