Spider-Man: Far From Home will soon be swinging its way to all of our homes, via digital platforms and physical media. Tom Holland’s most recent big screen adventure as the wall crawler found him facing some of his biggest challenges ever, and without the guiding hand of his mentor Tony Stark this time. But Stark’s legacy lives on in the film, mainly through the new costume that Peter Parker creates for himself for the film’s big climactic battle with Mysterio. A costume created using highly advanced Stark technology, but made with Peter’s own flair.

In this exclusive special feature from Spider-Man: Far From Home’s digital and Blu-Ray release, the creators of the film go in-depth on Spidey’s brand spankin’ new suit.

Unlike the blue and red of previous big screen Spider-Man costumes, the Far From Home finale costume is actually black and red. But this has a precedent in the original Marvel Comics. Back in Amazing Fantasy #15 when Spidey was first introduced to the world, Peter’s costume was definitely drawn as black and not blue by artist Steve Ditko. The blue was simply used as a highlight due to limited choices in newsprint colors, as was customary in comics back in the day. (Ever wonder why Superman’s jet black hair is actually kinda blue in all those old comics?) Pretty soon into Spider-Man’s comic book career though, the black was switched to blue, and the rest is history.

So will Spidey keep his new costume for his next cinematic outing? Peter has had a lot of costumes in the comics over the years, so there are plenty to choose from if they decide to go in a new direction. Just as long as we skip “Beach Spider-Man” from the ’90s. I think we’re all better off without that one. 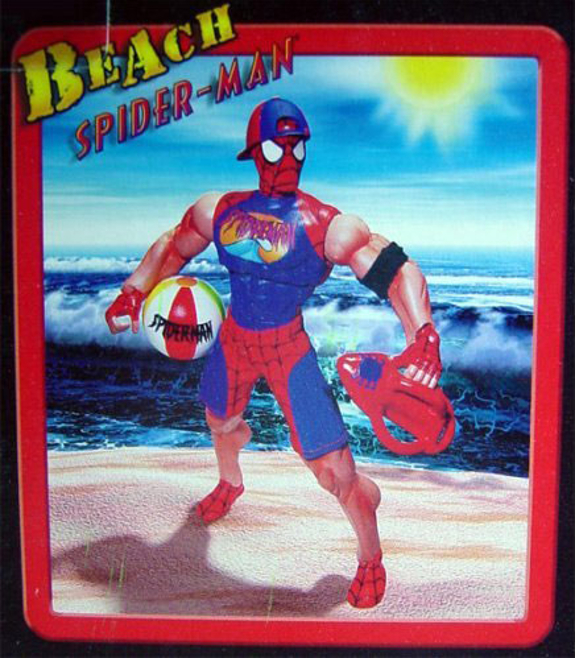