Is Mysterio in SPIDER-MAN: FAR FROM HOME a Villain or Hero? - Nerdist

Is Mysterio in SPIDER-MAN: FAR FROM HOME a Villain or Hero?

Jake Gyllenhaal’s Mysterio is heading our way in Spider-Man: Far From Home, but he might not be the villain you were expecting. In fact, he might not be a villain at all.

In the comics, Mysterio — real name Quentin Beck — is one of Spider-Man’s most dangerous foes. Mysterio debuted in Stan Lee and Steve Ditko’s 1964 The Amazing Spider-Man #13, portrayed as a bitter Hollywood stuntman, magician, and special effects designer. After Quentin fails to make headway in the film industry, he realizes his skill set could instead aid in a life of crime. He devises illusions and gadgets specifically built to counter Spider-Man — with his most famous being an engineered gas that can act as a smokescreen and hallucinogen. Quentin builds a Spider-Man costume to commit crimes, with the plan of appearing as Mysterio to defeat the real Spider-Man once public opinion has shifted. He of course loses, but that failure never stops him from finding new and inventive ways to trick and defeat the webslinger.

The Marvel Cinematic Universe often remixes its villains from their comic book roots, though. We learned while on the London set of Far From Home that this version of Mysterio isn’t Spider-Man’s antagonist at all. In fact, he’s an ally of Nick Fury and Maria Hill. Even more intriguing, he claims he’s from an alternate universe as a result of the events of Endgame.

“Mysterio is a hero in our world,” director Jon Watts said. Fury enlists him on his team alongside Peter to help deal with a growing threat of element-based monsters appearing around the globe.

Considering he says he’s from another dimension, it’s also a possibility his powers in this universe may actually be real. “He’s got a mystical side to him,” said executive producer Eric Carroll, “and that’s why he is on the team, he’s got sort of a working history with these elementals, and his powers tie to something similar.”

In the trailers, it’s Mysterio who rushes in to save Peter from the water monster in Venice.

“It’s very much a ‘big brother-little brother’ relationship,” Tom Holland told us, and that “Mysterio is always sort of sticking up for me and patting me on the back and telling me I did a good job.” 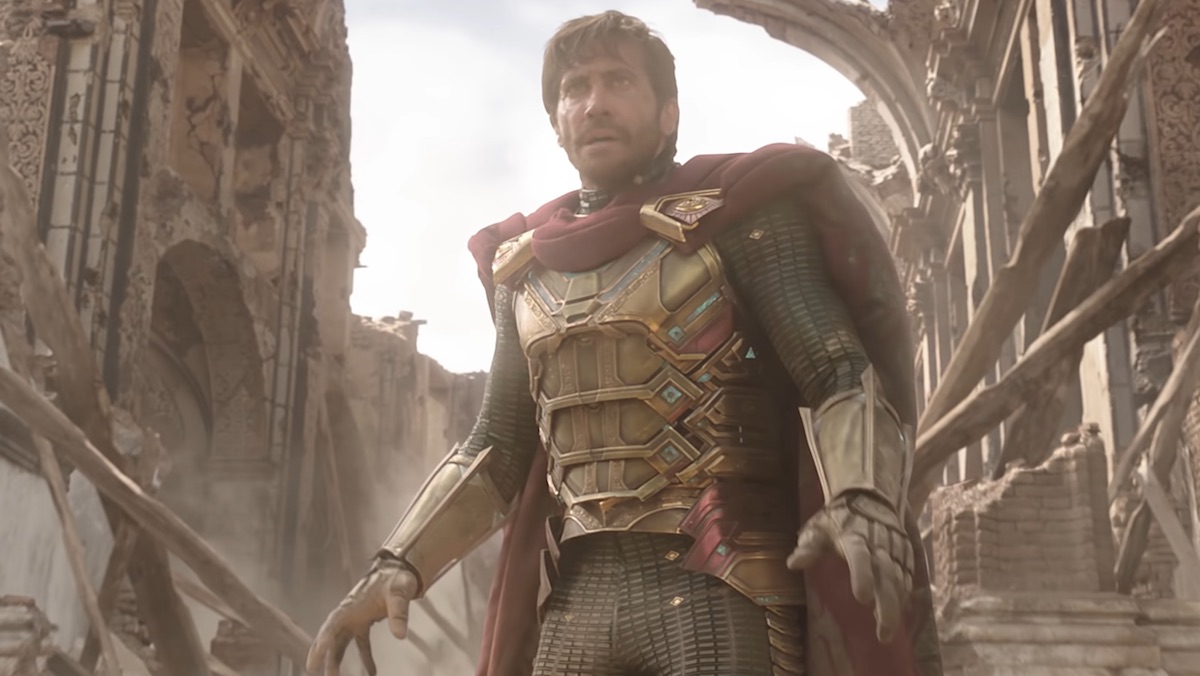 When asked about their relationship, Ned actor Jacob Batalon said Peter looks up to Mysterio, saying “he thinks he’s awesome. [Mysterio’s] like, the next big superhero. And it’s crazy because you put them on a pedestal…because he’s this new thing that we’ve never seen before. And Peter is just a really big fan.”

It’s unsurprising that Peter would form an attachment to the mysterious hero. Since these films never introduced us to Uncle Ben, Peter’s only on screen male mentor was Tony Stark. Now that Tony is dead, Peter is clearly at a loss, and looking for the kind of guidance that Tony once provided.

Similar to Michael Keaton’s Vulture in Homecoming, this Mysterio appears much more nuanced than his comic book counterpart, and his relationship to Peter is one of the core underpinnings of the film. While flipping Mysterio’s loyalties has the potential to compel — similar to Nebula’s arc, who is a villain in the comics but becomes a hero in Endgame — it may also spell disaster for Peter.

Carroll hinted at ominous things to come, saying “We wanted to find our in, and similar with what we did with Mordo in Doctor Strange, we wanted to give them time to have a relationship, so that when we get to do something different with Mysterio, it really feels like a betrayal.”

Well, that sounds bad. When asked if Far From Home had any tense scenes similar to the Vulture/Peter scene in Homecoming, Holland alluded to “a scene in the film where audiences will feel like they’ve been punched in the face”. Holland did not clarify further so we can only guess, but is it possible he’s speaking of some fallout between Mysterio and Peter? He may be played by the endlessly charming Jake Gyllenhaal, but Mysterio is foremost known as an illusionist. Tricking Peter into thinking he cares for him would certainly be a painful blow, especially when Peter is feeling vulnerable after Tony. The thought that Far From Home introduces the multiverse is an endlessly exciting one, but fans should also prepare themselves for the possibility that Mysterio is simply lying.

It’s hard to tell if or when Mysterio will end up becoming a full-on antagonist. It’s possible he’s been the bad guy all along, and the elemental monsters are his own creations, a way for him to steal the spotlight. Or, like with Mordo, something will shift in him during the course of the movie, and that will end up serving as the plot for a future film; it’s hard to imagine that anyone could hoodwink Nick Fury again after the Hydra-in-SHIELD catastrophe, after all.

Regardless, it sounds like Peter is, unfortunately, in for some more heartbreak.