It’s impossible to say who the next great James Bond will be, but we know who’d make the next great James Bond stunt person: professional “speedrider” Valentin Delluc. Delluc apparently has zero qualms about bodily danger, and can pull off some of the most epic aerial shows ever. Such as the gnarly exhibition in the video below. (Can’t you just here the series’ theme music now?)

Red Bull recently posted Delluc’s latest speedriding stunt (which combines skiing and paragliding) to its YouTube channel. The energy drink company, which is obviously a big fan of supporting people who are spectacularly gutsy, set Delluc up to do the stunt at a deserted alpine ski resort in the French Alps. Incidentally, the resort, Avoriaz, is not usually deserted, and in fact looks pretty dang magical.

The real magic in the video, however, is Delluc’s speedriding session. The skier-slash-skydiver extraordinaire’s sequence begins with his parachuting into Avoriaz; with confidence reminiscent of Bond’s in the legendary Spy Who Loved Me skiing cliff-jump. Then, after descending into the resort, Delluc begins swooping around—and ricocheting off of—different buildings.

Twenty seconds into the sequence, Delluc paraglides above a chairlift cable and grinds it like Tony Hawk on a skateboard. Or, perhaps, like a regular Hawk on skis? Regardless, Delluc certainly makes the cable grind look easy. Which is no surprise, as the lover of flying and skiing is a French speedriding champion, and grew up on ski slopes not far from Avoriaz. 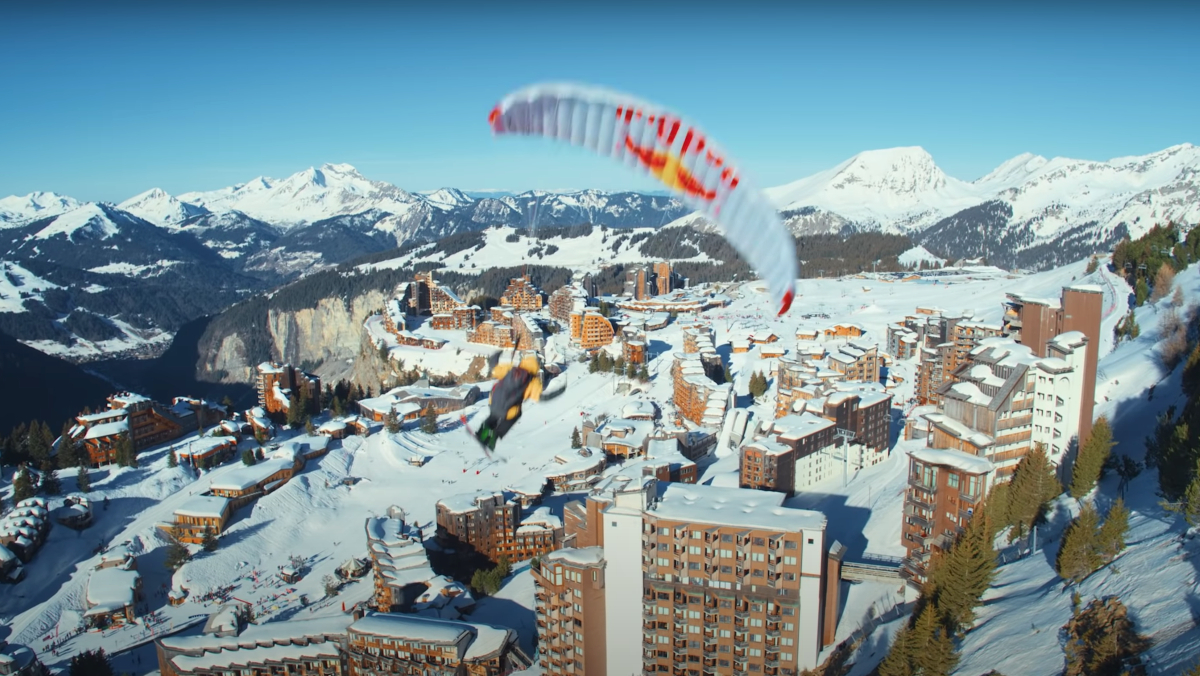 The adrenaline ride comes to an end with Delluc finally touching back down on patch of gently sloping mountainside, as if he were a normal skier. Wearing a parachute. Which, of course, is exactly how James Bond would arrive at a place like Avoriaz. Cool, calm, and ready to deal with the kinds of twisted villains who think it’s a good idea to marinate steaks in Red Bull.