Everybody get up, it’s time to slam now, cause we got another jam goin’ down. Welcome to the Space Jam… 2. More than two decades after Michael Jordan and the Looney Tunes defeated the Monstars, and after years of false starts, we’re finally getting a sequel. What will the new Tune Squad with LeBron James look like? And when will we see his team hit the court? Here’s what’s up, doc, with everything we know about Space Jam: A New Legacy so far. 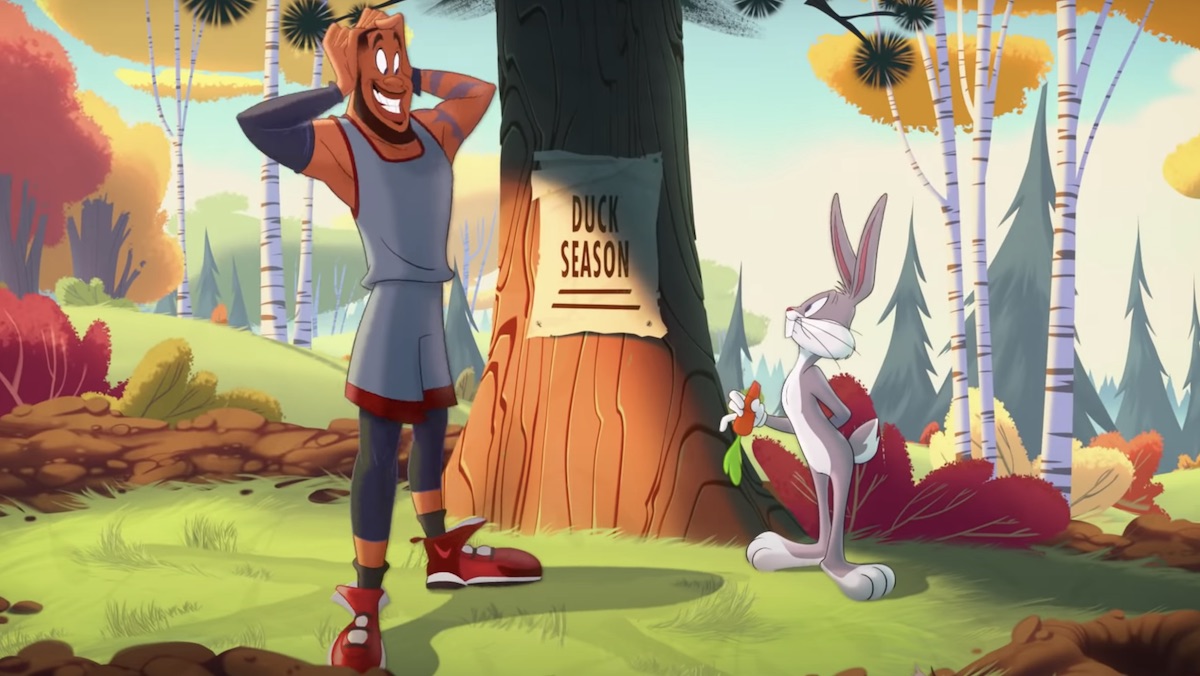 King James becomes a cartoon in the film’s latest trailer. This also raises the stakes for the actual Looney Tunes, whose very existence is also riding on the big game.

The first full trailer is one of the weirdest we’ve seen in a very long time.

Warner Bros. provided an official synopsis of the film. Get ready to see LeBron and the Looney Tunes gang take the court against the A.I. “Goons,” in what promises to be more of a family story than the original film.

“This transformational journey is a manic mashup of two worlds that reveals just how far some parents will go to connect with their kids. When LeBron and his young son Dom are trapped in a digital space by a rogue A.I., LeBron must get them home safe by leading Bugs, Lola Bunny and the whole gang of notoriously undisciplined Looney Tunes to victory over the A.I.’s digitized champions on the court: a powered-up roster of professional basketball stars as you’ve never seen them before. It’s Tunes versus Goons in the highest-stakes challenge of his life, that will redefine LeBron’s bond with his son and shine a light on the power of being yourself. The ready-for-action Tunes destroy convention, supercharge their unique talents and surprise even ‘King’ James by playing the game their own way.“

Entertainment Weekly‘s interview with James in March included more insight into the specifics of the film. It’s a lot weirder than we would have guessed.

“Oh yes, the story! Playing a heightened version of himself, James struggles to relate to Joe’s Dom, who’s much more interested in creating games than playing them. When Dom’s tech skills draw the attention of a CGI humanoid named Al G Rhythm (Don Cheadle), the father-son duo get sucked into the Warner 3000 entertainment “Server-verse,” with the A.I. kidnapping Dom in the hopes of stealing some of the King’s followers (IRL he has about 80 million on Instagram).”

In the original Space Jam, Bugs and co. faced off against a team of aliens known as the MonStars. This time around, the foes are malignant computer programs known as the Goon Squad. Team members include Arachnneka, The Brow, Wet-Fire, White Mamba, and Chronos. Take a look at the baddies below.

* Available on HBO Max for a limited time in the US only, at no extra cost to subscribers. pic.twitter.com/uBPr4inUFw

Entertainment Weekly’s inside look at the film also included the movie’s first official images. They are colorful, vibrant, and offer both hope and concern for the Tune Squad. Also, LeBron looks like he might break apart the whole universe with a dunk.

LeBron James’ company Uninterrupted offered the first look at the Tune Squad’s new uniforms and they are definitely not subtle. A colorful blue set has replaced the original white jerseys. The new threads have a giant Looney Tunes logo, which spans both the top and the shorts, on one side.

These are dramatically different from what Michael Jordan wore.

Kids are probably going to love them.

Most people know LeBron James as one of the stars of Trainwreck. What is less known is that he also plays in the National Basketball Association. And he’s not half-bad. He’ll be stepping into the lead role that originally belonged to the GOAT, Michael Jordan.

Star Trek Discovery‘s Sonequa Martin-Green has also signed on to the film. Variety reports she is expected to play James’ wife in the film. Avenger Don Cheadle will also appear as a rogue AI who pulls James into a video game world. Joining them will also be Khris Davis, Cedric Joe, Jeff Bergman, and Eric Bauza.

NBA insider Shams Charania also added entertainment reporter to his résumé when he was the first to announce which real basketball players will join James in the film. That includes NBA stars Damian Lillard, Klay Thompson, and James’ Lakers teammate Anthony Davis. WNBA stars Diana Taurasi and Nneka Ogwumike will also be in the film.

The Looney Tunes are also returning.

At one point former NBA player Jared Sullinger was listed in the cast as playing NBA Hall-of-Famer Charles Barkley, a Space Jam star whose talents were stolen. If this is not an error, it could mean we’ll see flashbacks, or possibly some time traveling shenanigans, which will involve a much younger Barkley.

Either way, that hopefully indicates the real Barkley returning for the sequel as well, and possibly other NBA stars who also appeared in the first film. That includes Larry Bird, Patrick Ewing, Muggsy Bogues, Shawn Bradley, and Larry Johnson. It’s unknown if the first film’s stars Wayne Knight and Bill Murray will also return. We’d also love to hear Danny DeVito return too. He voiced the evil alien Swackhammer.

And while we know Michael Jordan doesn’t play basketball anymore, the Tune Squad might need a GM.

One major star from the original film who will return in a big role is Bugs Bunny. He was given a locker in the first promo image for the film.

Lola Bunny will also return. According to an exclusive report from EW, Zendaya will voice the role for the film.

Though she won’t be the only other Looney Tunes character to return to the Tune Squad.

Will Michael Jordan Be in the Movie?

Good question. In a chat with Access Hollywood, Don Cheadle dropped the hint (around the nine-minute mark) that Michael Jordan would appear in the movie. But he added the caveat, “But not in the way you think.” Could this mean a photograph? A flashback from the first movie? Maybe a quick cameo? We’ll have to wait and see.

Black Panther‘s Ryan Coogler is producing the film. He wrote the film along with Sev Ohanian.  Malcolm D. Lee (Girls Trip, Night School) is directing, taking over from Terence Nance. With a script from Juel Taylor, Tony Rettenmaier, Keenan Coogler, and Terence Nance.

Make sure to check back here to find out what’s up with Space Jam 2 as we learn more about the film.

The movie will tip off in theaters next summer, on July 16, 2021. However, COVID-19 delayed the current season. It’s possible the 2020-2021 NBA season could end as late as July 22. That could push the film’s release back a couple of weeks. Especially since James’ Lakers are the favorites to repeat as champions.