Sowing Rumors In D&D: The Art Of Fighting Without Fighting - Nerdist

Sowing Rumors In D&D: The Art Of Fighting Without Fighting

One of the great things about playing Dungeons & Dragons is the variety of choices available for solving problems. Fighting can be a good way to do that, but not always. When you can roleplay your character’s knowledge, skills, and abilities to creatively handle a situation, without resorting to combat, those are the moments that show the true essence of the game.

I recently combined a couple of gameplay elements that I think are going to work well together to do just such a thing. By taking the Sowing Rumors tactic and pairing it with the Heart of Darkness, I’ve created a way to fight without fighting. Let me tell you how.

Sowing Rumors (DMG pg 131) is listed as a downtime activity in “Chapter 6: Between Adventures” in the Dungeon Master’s Guide. It details the process by which a character can create and spread rumors as “an effective way to bring down a villain or elevate a friend.” The technique involves a variable amount of time and gold depending on the size of the settlement where you’re sowing the rumors.

The Heart of Darkness is a feature that comes with the Haunted One background, which was released with the Curse of Strahd adventure module.

“Those who look into your eyes can see that you have faced unimaginable horror and that you are no stranger to darkness. Though they might fear you, commoners will extend you every courtesy and do their utmost to help you. Unless you have shown yourself to be a danger to them, they will even take up arms to fight alongside you, should you find yourself facing an enemy alone.”

Locorai Grim is my character venturing through CoS, a Neutral Evil tiefling warlock with The Fiend patron and Pact of the Blade. CoS is his first adventure, and I took the Haunted One background immediately, as it looked like a perfect fit for Grim’s personality.

One night, my group slept at the Blue Water Inn in Vallaki. My patron visited me in a dream, and told me Vallaki’s mayor, Baron Vargas Vallakovich, needs to be eliminated. If I do so, I will be granted a special boon. That’s all I needed to know to see to it I do what my patron commands of me. 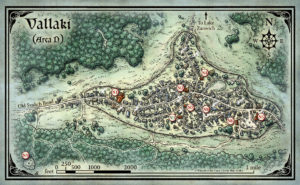 There are way too many people, and guards, in Vallaki to just go and pick a direct fight with the mayor, especially for a squishy and non-stealthy warlock. So, I decided to employ my 14 INT and 17 CHA to play upon the citizen’s firmly established fears of missing persons, doppelgangers, and mistrust that abounds in Vallaki.

I consulted with my DM, and we worked out my plan of action. I began telling everyone I talked to in Vallaki about my party’s discovery of a doppelganger (true), and how it had taken on the form of the mayor (not true) and tried to kill us. I visited the inn and a couple of shops to tell this rumor to anyone who would listen.

And they are listening! My high CHA and favorable die rolls have allowed me to get the attention I want, along with passing a few gold coins around. The Heart of Darkness feature is giving me advantage on conveying the right emotions, and on increasing the believability factor of my rumor, despite my tiefling appearance and evil alignment.

I’m hoping to stir enough negative public sentiment against the mayor that the citizens confront him directly. Perhaps they’ll get angry enough to seek his death, either by their own hands, or by hiring a group of adventurers who just happen to be in town to do the task for them. Or if I were to call out the mayor myself, perhaps the citizens would rally around me and assist me in bringing about his end. As long as my patron deems the mayor’s ending fitting, I’m good either way.

Roughly guessing, but I think we may only be about halfway through CoS. So I think there’s plenty of time for me to monger these rumors and accomplish my patron’s task. Aside from taking on Strahd, this sowing rumors operation is the most exciting and challenging encounter I think I’ll have in this adventure. And who knows? I may even be able to use this tactic to help take down Strahd himself! 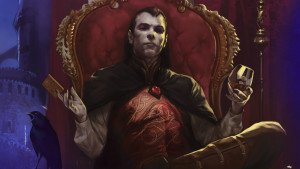 So, that’s how I’m engaging in the art of fighting without fighting in my D&D game. I hope you check out the Sowing Rumors tactic and Heart of Darkness feature for yourself, and think of how you can craftily use them in your own games.

Are you using these two elements in your D&D sessions? Tell us how in the Comments below!