I for one love a high-concept horror movie. Sure, there’s nothing wrong with vampires in a castle or zombies in some post-apocalyptic city, but those are familiar. Old hat. How many knives and masks do we need?! Give me something weird; anything can be scary if you look at it through the right lens. Something that, when you read a description, you immediately have to see it. The WTF factor is strong in Elza Kephart’s horror-comedy Slaxx, premiering this week on Shudder. It’s about haunted blue jeans that slaughter people who wear them. I mean, come on.

Slaxx debuted last year as part of the virtual Fantasia Film Festival, and it has the vibe of a festival horror movie all over it. I wish things were different and people got to experience it with a midnight crowd. It has a very, weirdly, simple premise but a funny and brutal execution. At 76 minutes, it never overstays its welcome. The movie quickly pushes the audience beyond the absurdity of evil pants with some gnarly gore and even a message or two. 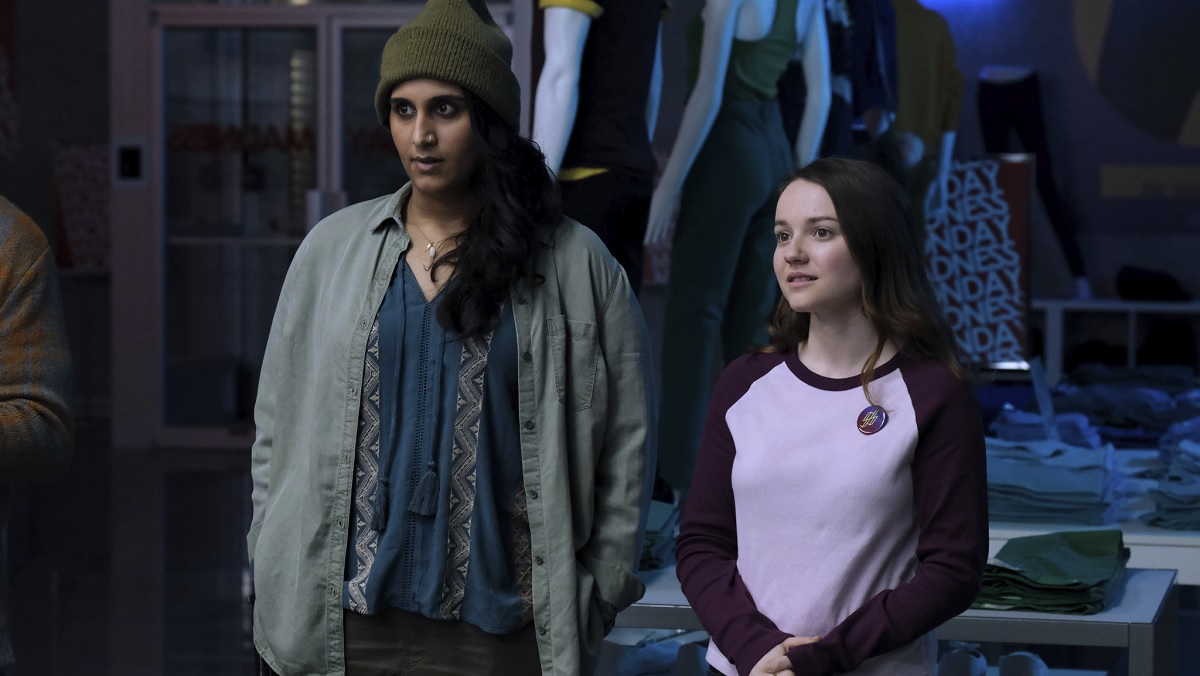 Our hero is Libby (Romane Denis), an idealistic young lady who has gotten a job as a sales clerk for a trendy clothing store. It’s her dream store; it promises fair trade and proper wages to textile workers, etc. Their image is entirely about how upstanding they are. Naturally, this being a horror movie, it’s not long before we learn they’re a pretty gross company. Libby’s new boss, store manager Craig (Brett Donahue), has a dream of becoming regional manager, and if tonight’s unveiling of the new season line goes off without a hitch, maybe it’ll happen.

The crown jewel of the new line are a pair of jeans that vacu-form fit to the wearer. It’s some wild new technology that promises anyone can look good (“whether you’re five pounds overweight or five pounds underweight,” one of many such hilarious jabs at the fashion industry). When one of the employees puts on a pair of the new jeans, Craig and Libby discover they horrifically murder whoever’s wearing them. While Libby wants to go to the police, Craig can’t risk his promotion. The store is locked down, after all. 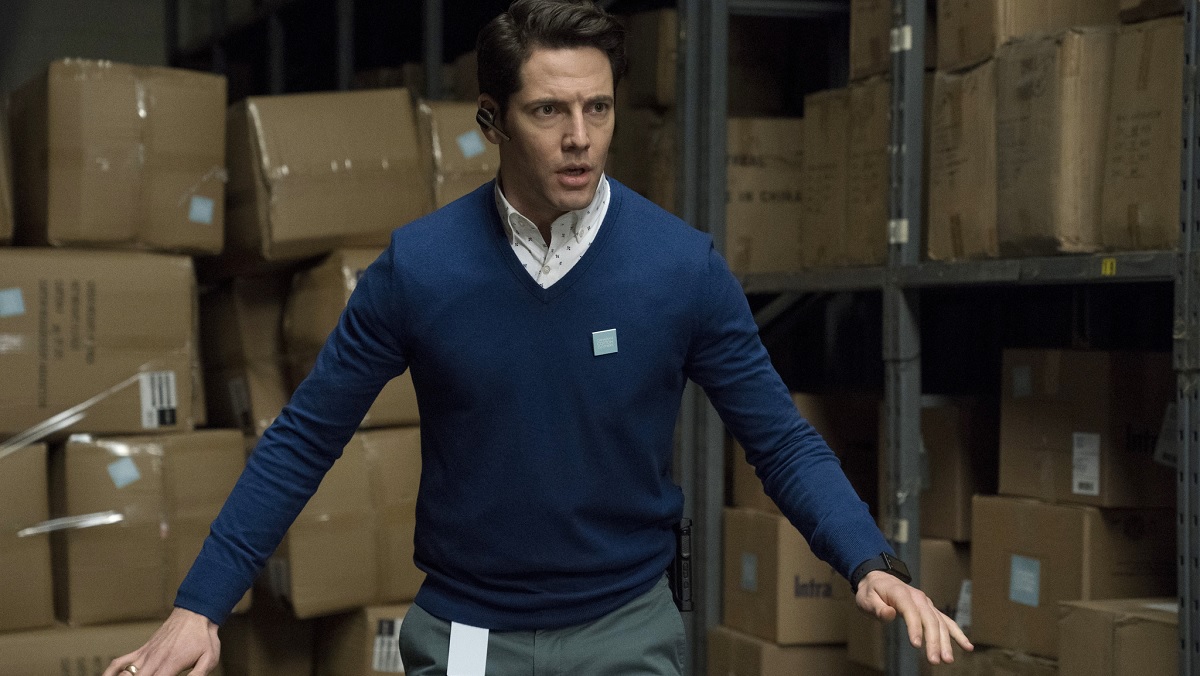 What follows, as you might expect, is a string of horrible and violent (yet hilarious) set pieces wherein the jeans kill anyone in their vicinity. They move around on their own, occasionally looking like quadrupedal monsters, and eviscerate people all throughout the store. It’s only when one of Libby’s coworkers, Shruti (Sehar Bhojani), begins singing a Bollywood tune to herself that the pants behave differently, dancing traditional Indian dances. With this revelation Slaxx heads toward its silliest moments, but finds pathos in where none seemed possible. I won’t spoil the rest, but there is a reason for all of it.

Slaxx has a great hook and some excellent satire; one thing it doesn’t really have is scares. The audacity of the premise does a lot of the, if you’ll excuse the pun, leg work. But even in its darkest moments, we never really get any true scary moments. A movie with a similar premise, Peter Strickland’s In Fabric about a haunted dress that kills people, is much more eerie, uncanny, and upsetting. Slaxx is not going for that same tone in the least, and as such only really succeeds as a weird dark comedy more than a chiller. 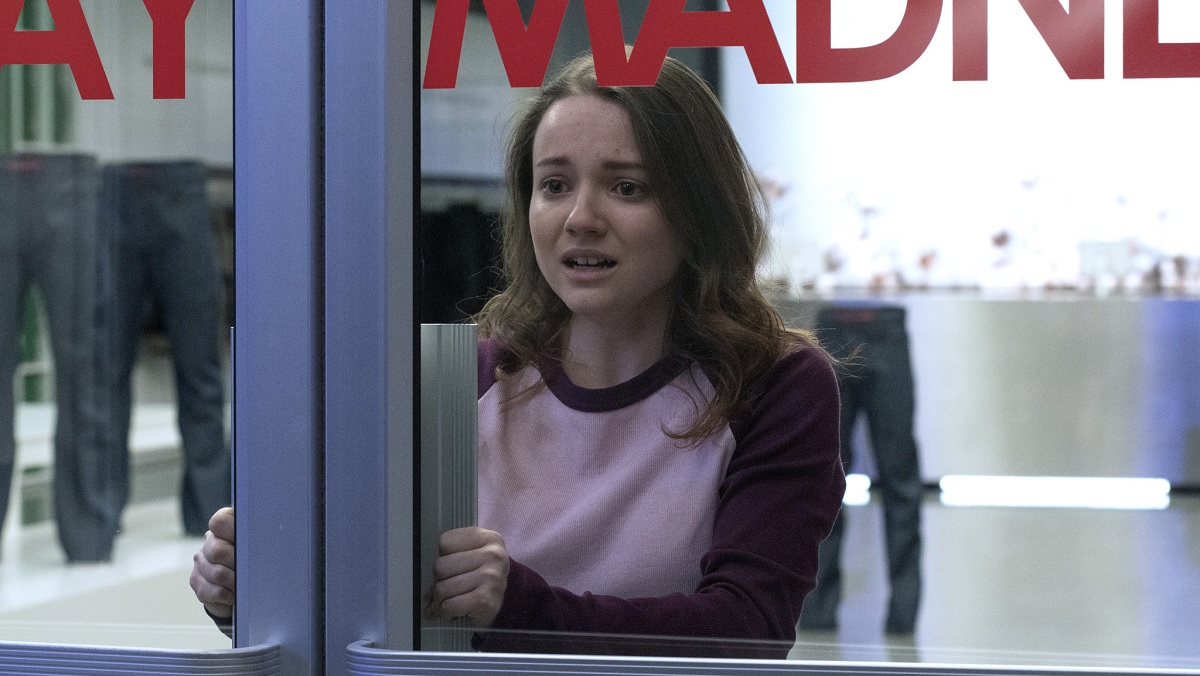 The performances are good, however, and deceptively simple green screen effects for the pants work wonders. Slaxx is the perfect movie for an eventual movie night with friends. While I think it probably loses something watching at home by yourself, it’s nevertheless a fun and bloody experience for yet another quarantine weekend.