Show Netflix How It’s Done When You Play THE NETWORKS

Love tabletop games? Be sure to check out our show Game the Game, where host Becca Scott is joined by great guests to play fantastic games every week!

Everyone has opinions about their favorite shows. When somebody asks about checking out a new show, that question is often flooded with specific answers on social media. “Brilliant but cancelled,” somebody might say. Someone else might advise you to “skip the first season and it doesn’t get REALLY good till the fourth”. There also might be an argument about which actor was the better lead.

All of these moments and more are part of the makeup of  The Networks, a card drafting game from Gil Hova’s Formal Ferret Games. The Networks and its expansions take players out of their easy chairs watching TV at home and puts them in the uncomfortable thrones of powerful TV executives trying to entertain the masses with a variety of programs and stars while raking in money on ads. We got our hands on a copy of the game right before the fall season started and decided to post a little water-cooler talk about this game. 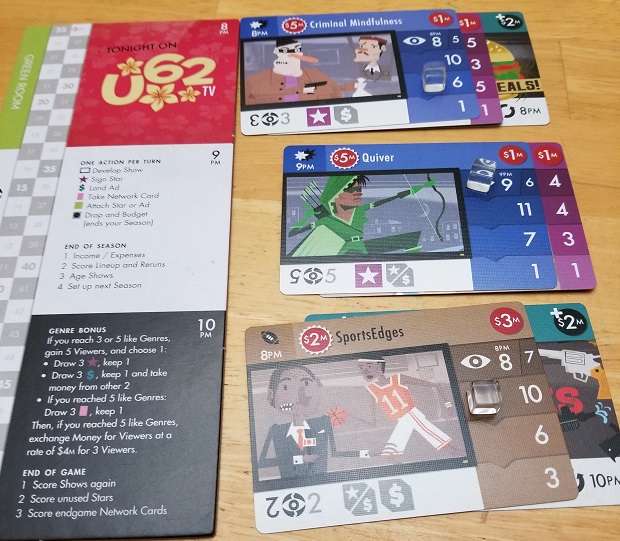 Each player represents a TV network looking to fill three programming slots on their network from a variety of shows with different costs, requirements and viewership. Players take turns drafting cards into their tableau so they can get the most efficient use of their cards as possible. Most of the cards in the game are double sided; they do best until certain circumstances. Put a show outside of its preferred timeslot and it won’t bring in as many viewers. Put a cult sci-fi actor in a sci-fi show and you’re going to get more viewers watching your new show hoping they make a ton of references to the actor’s old show.

Shows also have requirements the networks have to meet, usually in the form of actors (which cost money) and ads (which give money). You must have any required cards to put on a show to get it on the air but some shows have optional cards that can provide more actors or ad revenue. The other important strategic element players should recognize right away is, like in real life, shows age and lose viewers. A player must weigh developing a show that provides a lot of viewers in the first season but dies off afterwards versus a show that might provide a smaller but more consistent viewership over time.

Each game of The Networks is five seasons, and the types of shows available are sorted into different decks depending on the current turn of the game. There are some other strategic elements to consider, such as Network cards that players can play to break the rules a little or ending their turn early and reaping a bonus of money or viewers. The key to winning, however, is knowing the right place and time to line up Star, Show and Ad cards on the programming tableau. 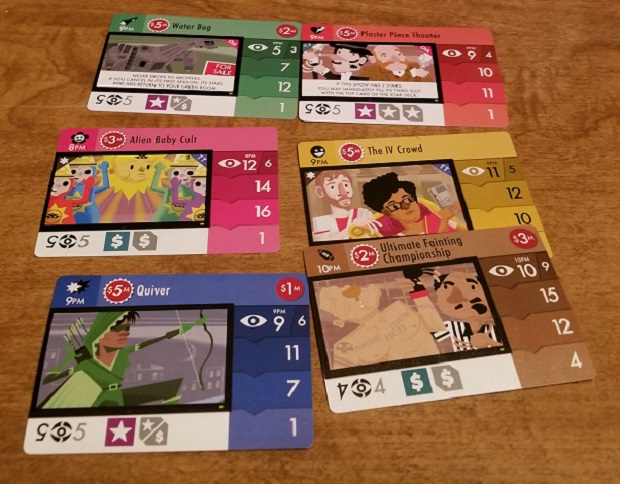 The look of the game is one of the things that really caught our attention. The game’s iconography is crisp and clear which keeps players appraised of their choices and speeds up setup. The game includes custom boards for each player count to get every round off on a good start. The real star of the show, however, is the game’s sense of humor. The shows are all parodies of real shows (or real show types) that wouldn’t be out of place in a deleted scene from the cult classic film UHF.

The actors fit such on the nose archetypes like The Guy Who Dies In Everything and have mechanics that back up the joke. In fact, a curious thing happened in a few games; some players became attached to their shows and their actors so much that they started filling in the details of the show at the table including real actors, plot points and reasons why the viewership went up or down. The thematic play also made other players recoil in horror as they heartlessly cut underperforming shows before realizing they were making the same calls that executives who killed their favorite space westerns or teen detective shows did. 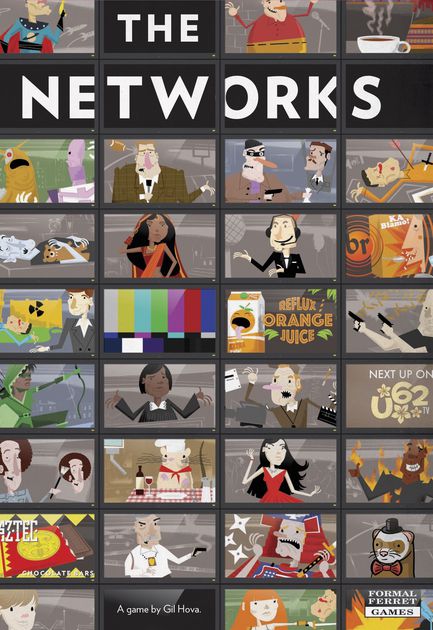 The Networks has been the subject of two Kickstarters and has several expansions available that change the way the game plays. On The Air adds new cards unlocked by the Kickstarter as well as blank cards for budding creatives who might want to add their own parody shows to their game. Telly Time adds British shows and more genres to the mix along with a change to the genre bonuses that players can achieve by becoming renowned for programming a certain type of show. The large box expansion Executives adds new starting boards themed around specific TV executives that offer an asymmetrical start. Each executive gets an interesting power but also has to deal with a drawback. These expansions allow players to customize their experience with The Networks to get the feeling just right for their table.

Everybody’s had that moment where they’ve watched an awful show and thought they could do better. Now, with The Networks, it’s time to see who can hack it…and who is just a hack.

What’s your favorite cancelled TV show? Tell us in the comments!