Renaissance Faires probably aren’t returning for a little while longer. But you don’t have to leave your house to experience all the costumes, stories, and characters you’d meet there. The virtual immersive experience Sherwood & Nottingham is returning for a second season. And you can either watch or join in on the fun.

Spy Brunch is launching a new chapter of its interactive online theater and roleplaying experience based on the world of Robin Hood. This second season begins May 12 and runs until June 5. The immersive narrative lets participants “enjoy a world that combines the medieval, the modern, and the magical” in multiple formats. From the official press release announcing the new season:

“This immersive narrative unfolds across online platforms, including a custom Sherwood & Nottingham website with many areas to explore, live-streamed newscasts and interactive ‘happy hours’ on Twitch, ‘town meetings’ and related gatherings on Zoom in addition to avatar-based exploration and interaction on Gather.town, the gaming-inspired platform. Returning players from season one can expect new adventures and new players are welcome to join and jump straight into the second season without fear of being lost in the storyline.”

Sherwood & Nottingham‘s first season debuted in November. It garnered a nomination from No Proscenium Audience Choice awards for Outstanding Achievement in Alternate Reality Gaming or Experience. In the second chapter, “players will become loyal subjects of the Kingdom of Anglia with some living in the glass-walled metropolis of Nottingham, while others belong to the hardscrabble seaside village of Sherwood.” 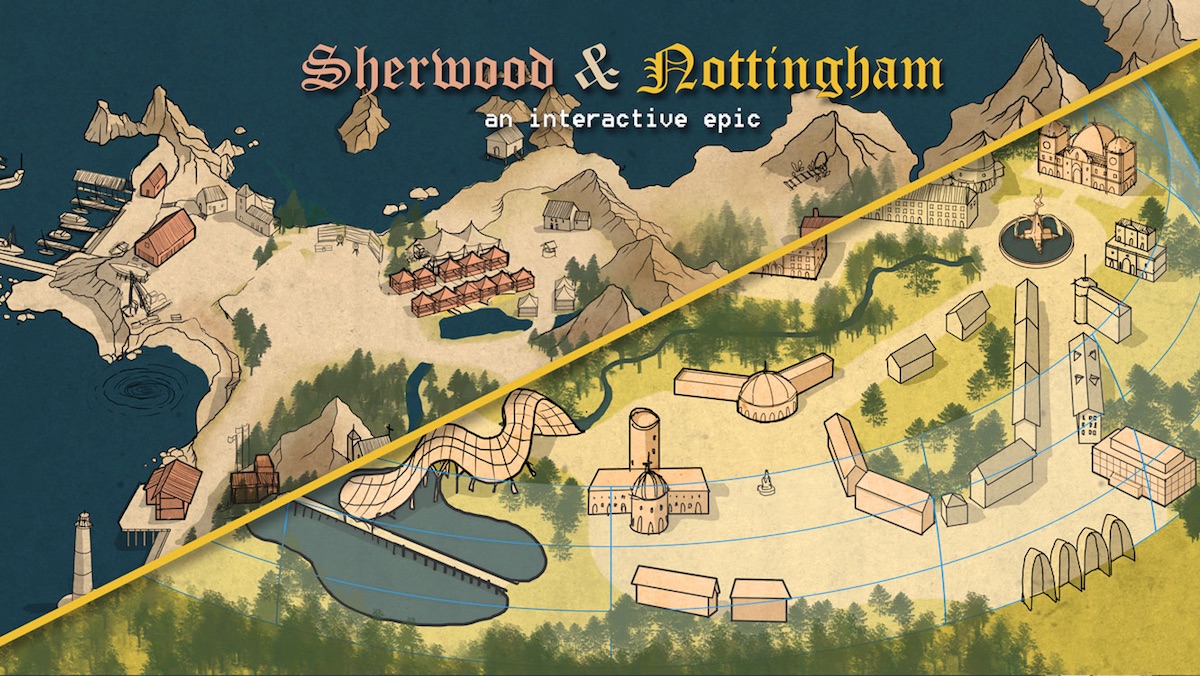 At the start, the Kingdom of Anglia “finds itself in a most turbulent era, already suffering from a strange plague as power struggles emerge in the wake of beloved King Richard’s sudden and shocking death.” It will be up to players to “stand strong together, make good choices, and trust the right allies.” As “the fate of the two cities and the Kingdom itself depend on” them.

Participants (or viewers) can select one of two ticket levels: Citizen Spectator and VIP Guild Member. The Citizen Spectator ($50), as you can guess from its name, is for those who want to watch the story. They don’t have to get involved in the experience. But they’ll still get full access to the website and all online community events and experiences. That works out to roughly 12 hours of entertainment.

The limited number of VIP Guild Member tickets ($150) “offer the chance to become deeply involved in the story, interact with key characters, and influence major storylines over the four week run.” Those who opt for that tier will receive “a package of in-world materials and artifacts.” And they will “gain access to special live encounters including one-on-ones, secret meetings, extra storylines, and mysterious trails that unlock Kingdom secrets.” You can purchase both tiers through the event’s official site.

We’re excited to announce that we’ll be offering themed food and drink for Spy Brunch’s upcoming second season of SHERWOOD & NOTTINGHAM, a four-week online epic inspired by the classic tales of Robin Hood! Visit https://t.co/sW0lxu46tz for tickets and more information.

There’s also an extra special bonus for players in the Los Angeles area. They can pick up Sherwood & Nottingham-themed food and drinks at The Roguelike Tavern in Burbank.

That’s the one thing we really miss about Renaissance Faires. Eating our way through them.