Who is That SHAZAM! Character in the Movie's End Credits? - Nerdist

Who is That SHAZAM! Character in the Movie’s End Credits?

Spoilers contained herein for the mid-credit scene of Shazam! You are warned!

So, just who was that little worm dude at the end of Shazam!? Would you believe that’s one of the character’s main villains for 75 years? 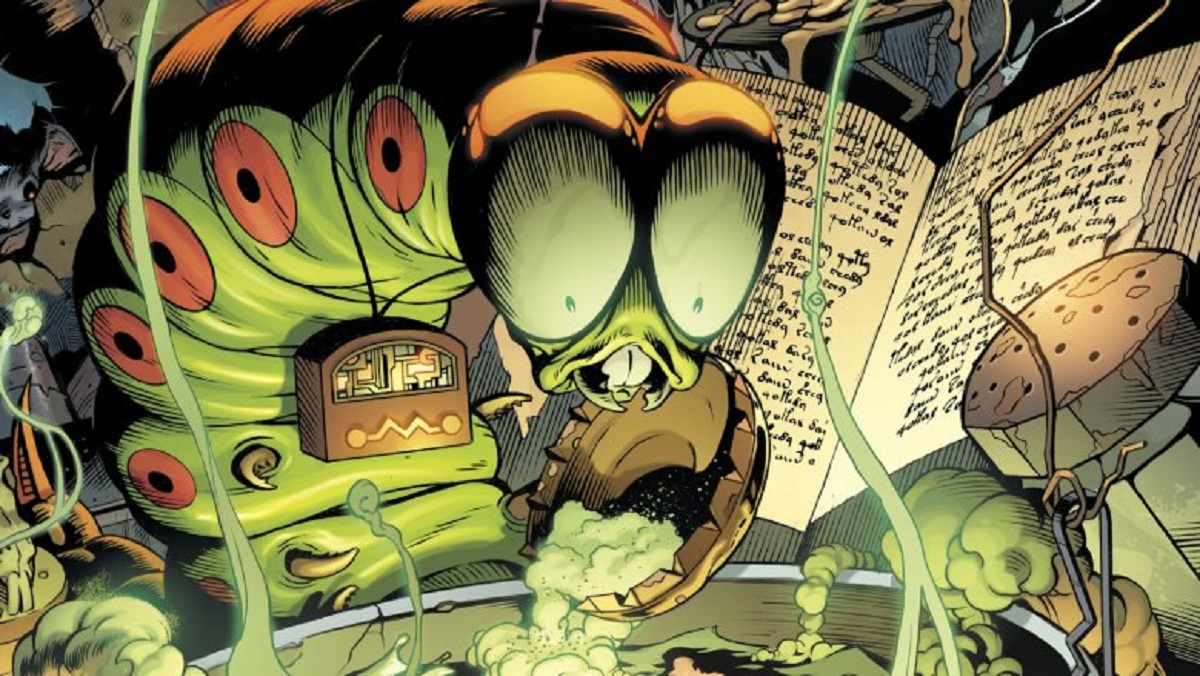 Although most modern day comics fans would say Black Adam is Shazam’s primary nemesis, this is true only of comics in the least few decades. In Shazam’s Golden Age heyday, Black Adam appeared just once. The World’s Mightiest Mortal’s most notorious enemies were Doctor Sivana… and the evil worm known as Mister Mind.

Yes, one of comics’ most  popular characters’ main villains was in fact a tiny alien worm with cartoonish features and giant glasses. And unlike an ordinary worm, this little guy had designs on conquering the world. Mister Mind was created by Otto Binder and CC Beck, the primary creators behind Captain Marvel, who later went on to define Superman comics in the Silver Age. They created concepts like Supergirl and the Legion of Super-Heroes, among others. In his first appearance, Mister Mind was an off-panel voice, and only made his first full appearance in Captain Marvel Adventures #26 in 1943. From that point on, Mister Mind was one of the Big Red Cheese’s primary antagonists. 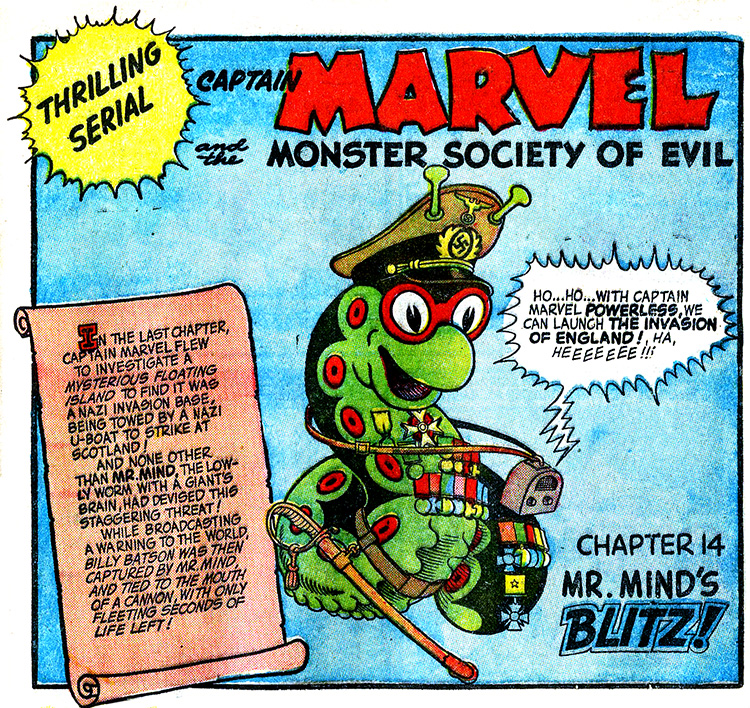 Mister Mind hailed from the planet Venus. In the old Fawcett Comics, Venus was inhabited by many different species of mindless slugs and worms. The creature who would become Mister Mind (his Venusian name being unpronounceable)  was born a mutant and highly intelligent. Using his scientific genius, he invented  an audio-amplifier, which he used to project his tiny voice. He also wore huge glasses because he was actually nearsighted.  His plan was to conquer Earth using hypnosis, but he was thwarted repeatedly by Captain Marvel and the Marvel Family. 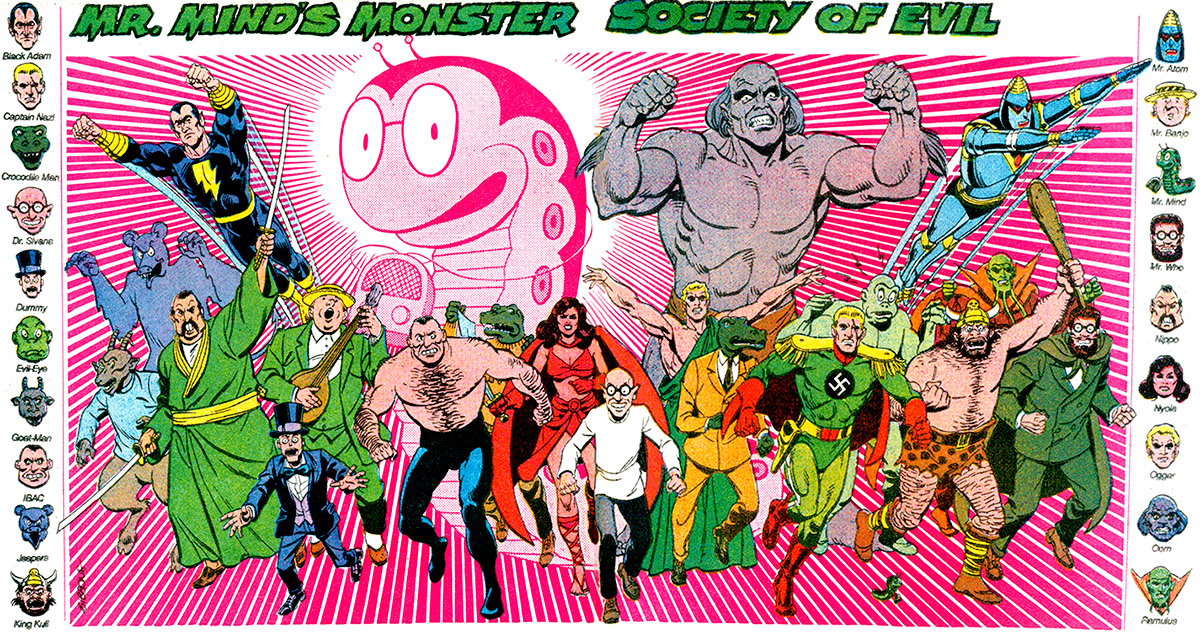 Mister Mind then formed his own villainous team, the Monster Society of Evil. He put out a call to every bad guy Captain Marvel ever faced, and they pretty much all joined up. Even Adolf Hitler and the entire Axis powers joined the team at on point! Unlike other Super-Villain teams of the day, the Monster Society was made up of villains that were already famous in their own right. This inspired later groups like the Injustice League and the Legion of Doom, but it was Mister Mind who did it all first.

Mister Mind was never quite as popular as he was in the ’40’s/’50s. When Shazam was revived in the ’70s, Mister Mind was one of the baddies who made the cut. However, a little worm with giant glasses and psychic powers was just too goofy. This was the era of Wolverine and the Punisher, and bad guys like Apocalypse. A cartoon worm hatching evil plans seemed like a throwback to a bygone era, and Mister Mind made very few appearances during the Bronze Age of Comics. This is probably because to the average teenage reader, he seemed like something out of Inspector Gadget. 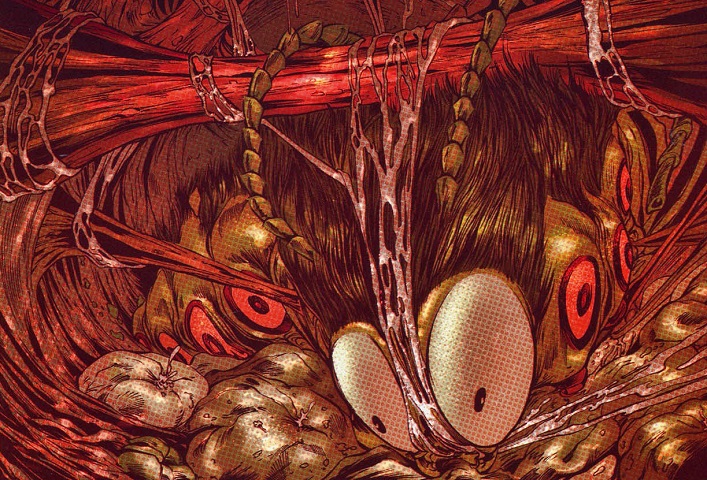 Jerry Ordway resurrected Mister Mind in the ’90s in the Power of Shazam series. Mind was now one of a race of millions of mind-controlling worms from Venus, who once ruled the Earth during the Ice Age. As an advance scout for a new invasion, Mister Mind arrived on Earth, where he came an enemy of Captain Marvel’s. He was a little less silly looking than before, but essentially still a dastardly worm. It’s just really hard to make that threatening in a modern context. 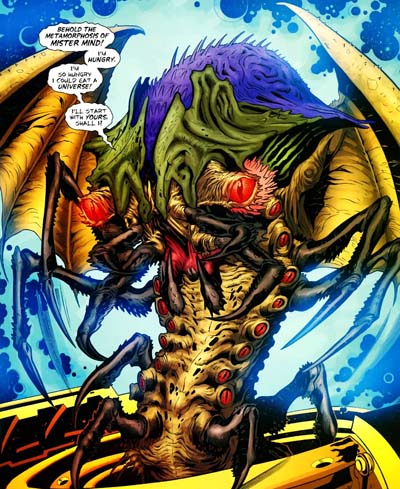 But leave it to writers Grant Morrison, Mark Waid and Geoff Johns to make the little guy scary. The mini-series 52 explains that the worm persona we all knew was a form of chrysalis, and once the cocoon breaks, the final form of Mister Mind would emerge. And he was far more terrifying. The giant bug even began to eat away at time itself, helping to shape the new DC Multiverse. Maybe they shouldn’t have underestimated him after all. In present day DC, Mister Mind continues to be a thorn in Shazam’s side, and one of his primary villains. But, we will admit….we kind of miss the giant glasses.