The nights are growing longer and the air is getting cold. It’s the perfect time to break out board games (well, any time is the perfect time but go with me here) and as the season moves towards gathering with friends and family, there’s a new title you should reach for: Shadows in the Forest. Played in a completely dark room, it’s a game that uses light and shadow more deftly than most games use cardboard.

Technically Shadows in the Forest is not a brand-new game. It was originally published in 1985 as Waldschattenspiel. Publisher ThinkFun licensed the game and brought it to the US with one important change: The original game was played with a lit candle pushed along the board. The new edition smartly – and safely – exchanges this component for a cute LED lantern and glow in the dark die. Becca shows exactly how the game is set up and played in this How to Play video:

In Shadows in the Forest one player takes on the role of the Seeker, while everyone else plays as one or more Shadowlings. At the beginning of the game, the Shadowlings are scattered, hiding behind the trees. Ideally, you’re playing in a room with no light whatsoever. Most of my plays have been in a basement, which has been perfect. The board is littered with tall cardboard trees and the only light in the room comes from the lantern. The shadows are stark, making it perfect for hiding the Shadowlings. 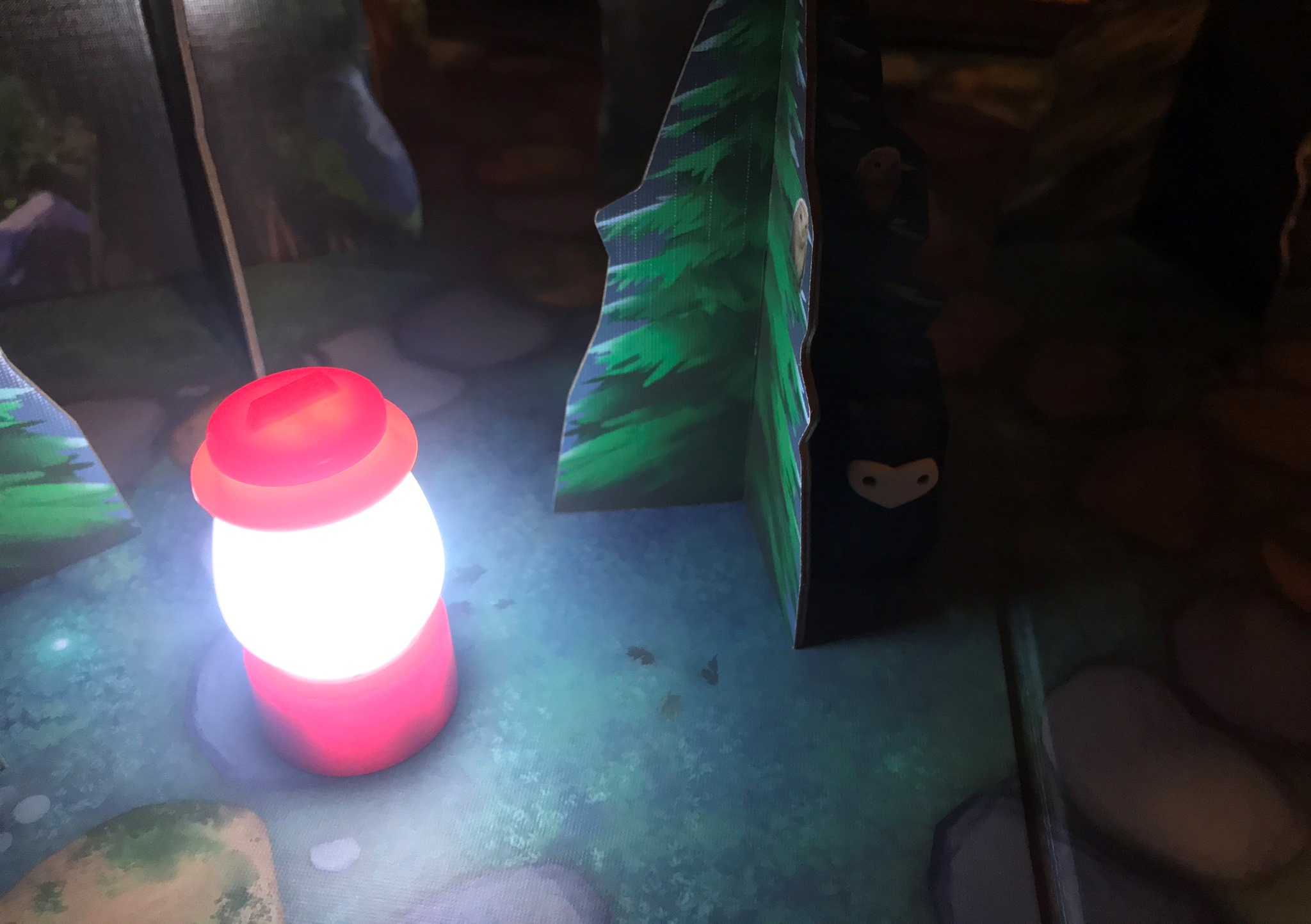 Even if you can’t play in a completely dark room, Shadows in the Forest is still plenty of fun. The Seeker spends their turn rolling a die for movement and deciding which routes to take through the forest. At the end of their turn, they close their eyes and the Shadowlings get to move. Shadowlings are trying to reunite, together in the shadows and have complete movement freedom. They can scoot from tree to tree, running clear across the board…if they can. The catch is that if a Shadowling is touched by any light emanating from the Seeker’s lantern they are frozen. Their controller removes their little mask and must be “unfrozen” by a friendly Shadowling on a future turn.

This is what makes playing in a dark room such a fun experience. The Seeker can’t see where any of the Shadowlings are, making the discovery of one hiding behind a tree exciting. Because the Seeker must keep moving, they can’t simply sit and wait for more Shadowlings but they do have a pretty good idea of where they’re headed. A dark room also makes it easy for the Shadowlings to know when they’re illuminated by the Seeker’s Lantern and not through ambient lighting. 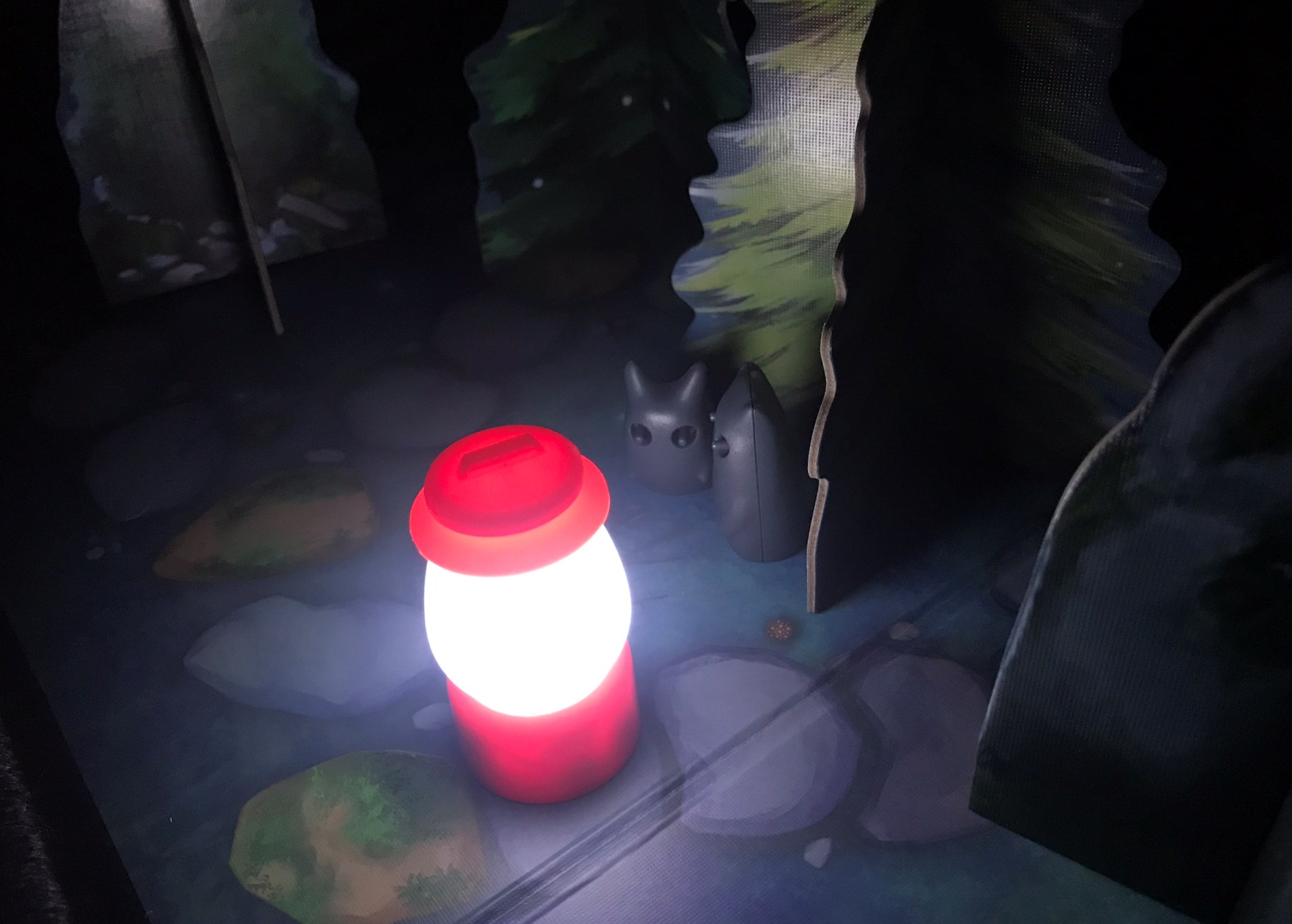 Shadowling movement is rather free-form, and the game does rely on a bit of trust between players. This isn’t a problem for grown kids but it’s worth pointing out if you plan to play with younger gamers. I found playing with my son and his friends (age 3-7) most enjoyable when the oldest kid was the Seeker and I helped the younger kids with the Shadowlings. Turning them loose with the Shadowlings was a lot of fun for them, but we sort of lost the game element.

There are few games like Shadows in the Forest on the market. Watching the board shift and change as the light moves around provides a unique form of tension. I’ve known about Waldschattenspiel but didn’t think it was a game I’d ever get to play. It’s exciting to see games like this appear. I can assure you’ve never had a family game night quite like this, and it’s worth pulling this out and turning the lights off.

If you want to see the game in action, check out our Game the Game episode!

Pick up Shadows In The Forest at your local gaming store or  online!

This article is sponsored by ThinkFun.