We love tabletop games here at Geek & Sundry, and we love to showcase the best games out there. If you want to stay tuned into what’s new and exciting in world of tabletop games, be sure to tune into Game the Game hosted by Becca Scott returning soon to Twitch and Alpha.

Adenosine is the chemical responsible for nudging your body towards sleep. Caffeine is a magical little drug that binds itself to our brain’s adenosine receptors, effectively blocking them and preventing drowsiness. Caffeine is good stuff.

Jump Drive is the cardboard jungle’s version of a brimming can of Monster. This small box engine building card game is flashing its thrusters and setting fire to those little devious adenosine molecules so you can keep banging your head and moving your feet long into the night. It’s John Travolta slamming adrenaline into Uma Thurman’s chest. It’s Vin Diesel flying through the streets in a black Challenger. It’s simply really damn good.

This Tom Lehmann design is a direct successor to the modern classic Race for the Galaxy. It’s an abbreviated version of its sibling, offering a similar tableau development sci-fi card game that is about assembling combos and chaining success. It’s Race for the Galaxy if you shot it out of a cannon. 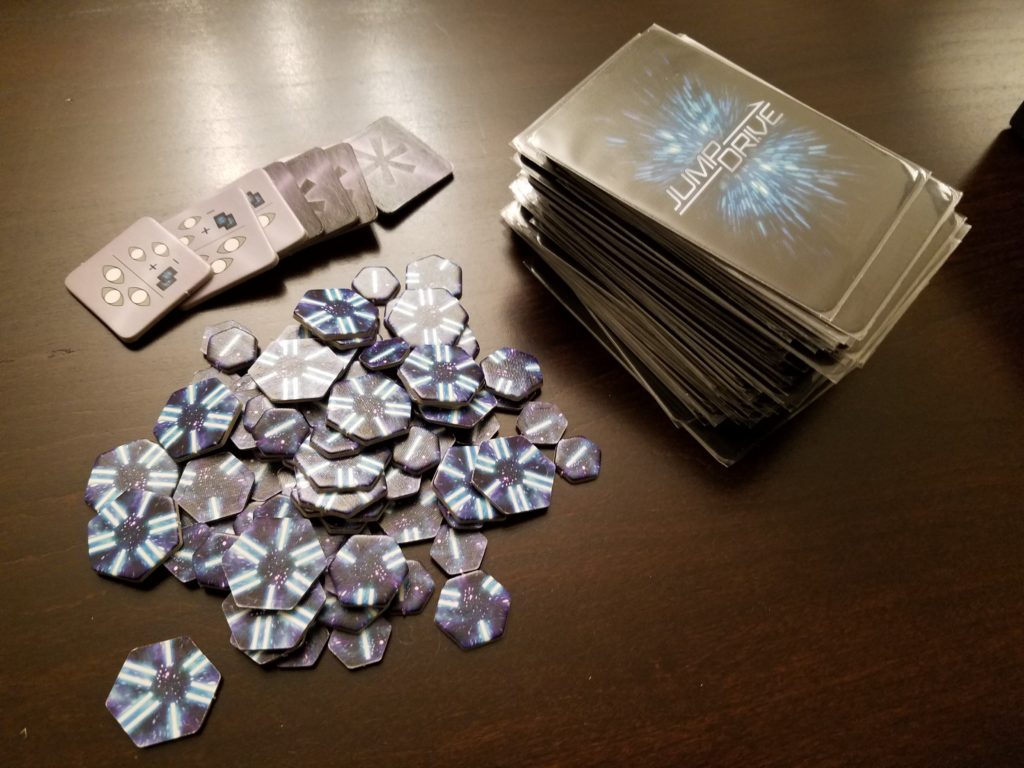 Jump Drive succeeds because it’s accessible and quick. A substantial problem with Race is the intense reliance on iconography. Deciphering those hieroglyphics is an obstacle for newcomers that is more intimidating than calculus or venereal disease (two things I put on equal footing). Jump Drive relies much less on symbols and instead utilizes a small amount of easily digestible text.

Yet there’s still a strong sense of familiarity. The illustrations adorning the cards and even the conceptual functions often remain the same. If you’ve played a great deal of Race for the Galaxy then you’re down with the Galactic Trendsetters. Those enigmatic pink socialites are back, and they do pretty much what you’d expect them to do within the confines of this simpler system. This is great because it can lean on a comfort-level for veterans while still remaining open and welcoming to fresh meat.

Jump Drive is still a race to a victory point limit–one with a track that’s short and vehicles that fly like beams of light. Each round players simultaneously select a planet or technological development from their hand to acquire and add it to their tableau. The cost to craft your empire is paid through discarding cards and effectively triaging options. It’s a very simple and direct economy that fosters difficult decisions.

Each card added to your tableau will afford either victory points or additional draws from the communal deck at the end of each round. The most solid of planets and technological breakthroughs will provide both. Additional special rules and unique cases spring up consistently in that card text, throwing a wrench in the evaluation matrix you’re trying to piece together while flying by the seat of your shiny space pants.

And that’s really it. This is a game of throwing down cards with tactical direction and being fed back victory points and more cards. Because the game is so brisk it’s necessarily loose. Large swings can come with the many possible combinations of abilities and some of the high-cost developments can have you vibrating in your chair with excitement. It’s at times very wild and this compounds the sense of thrill.

Unfortunately, there is a nagging downstream sensation that randomness certainly plays a part. With each hand, there is a wide range of options presented to a player, but every hand is certainly not created equal. Race for the Galaxy overcame this challenge by allowing you enough time and space to catch up within the arc of play. Jump Drive is so damn short with its 15-minute playtime that this is often impossible to accomplish. Knowledge of the deck and shrewd decision making certainly allow for an epic reversal, but there are times when fate’s just kicked you in the groin and you’re stuck wincing for the last few minutes while Jim cackles with glee as he collects 20 VP.

There’s a certain level of clever in that the game cuts the experience off shortly after it ramps up. This means that anyone who builds a spectacular combo will claim their victory forthright. It also avoids feeling too brief as those rewards hit you so fast and hard that just as the air’s been sucked out of your lungs you’re ready to do the whole thing all over again. The space it teeters on here is so fine and precise that it’s remarkable, but Lehmann pulls it off with deft precision. 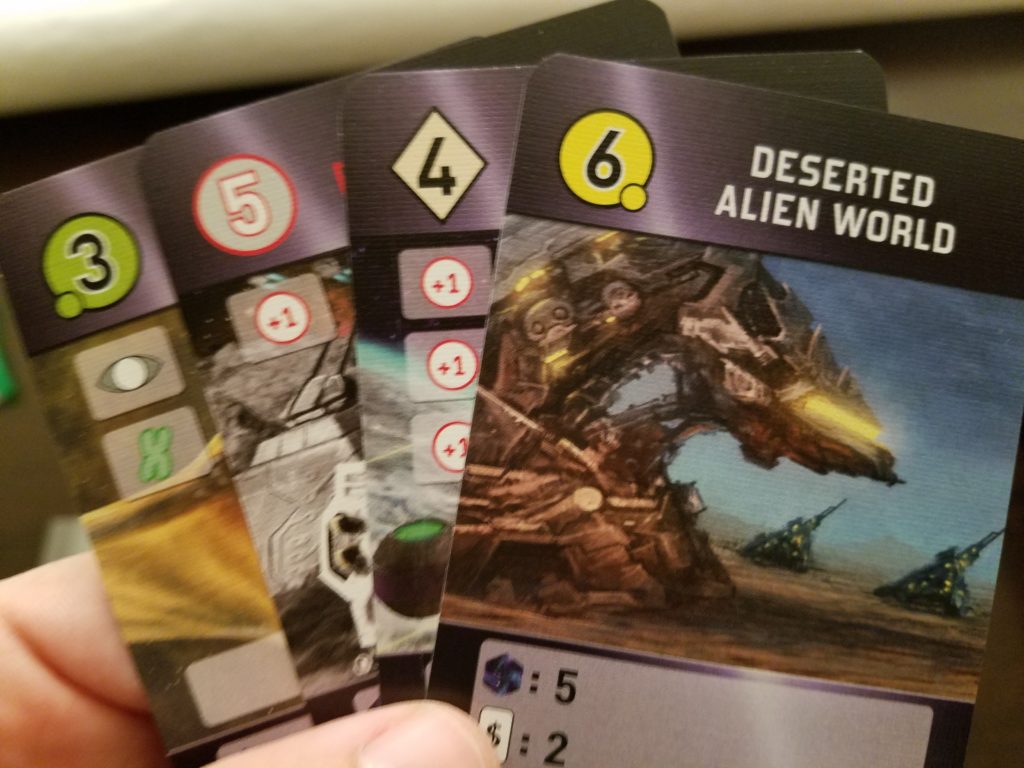 The real magic of Jump Drive is in its feedback loop. The reward cycle is so swift and the arc of the game so sharp that you explode from an empire of nothing into a bustling economic and military juggernaut at the drop of a galactic fedora. As you build your economy and progress from picking up a couple cards a turn to drawing 14 each round, you feel like the world’s fattest king, showered with an unending stream of gifts. The first time you hit a combo where you’re pulling in 30 victory points each phase you’ll need your momma to come and lift your jaw up off the floor.

Designs focused on building an engine need to pay out. Jump Drive does just that right after the pistol has been fired and the race has begun. It simply makes you feel all warm and fuzzy while still presenting a strategic framework to cognitively challenge your thirsty brain. It’s not perfect and occasionally you’ll get dusted by the whims of lady luck, but it rebounds harder than a scorned lover and is right back at your side to fire up your engine and rub your belly.

Have you played Jump Drive or its predecessor Race for the Galaxy? Let us know in the comments! Don’t forget to check out into our tabletop show Game the Game hosted by Becca Scott as we play games and talk about what’s happening in the land of tabletop gaming coming back from hiatus soon on Twitch and Alpha.