If a title determines a game’s worth, Wizkids’ Seal Team Flix is a baller. Pun enthusiasts aside, that’s simply not the case, and for good reason. A game’s quality is intrinsically tied to the experience it creates at the table. Each roll of the dice, cataclysmic shift in board position, and dramatic flick form the bones of engaging and memorable play. Seal Team Flix has bones for days. 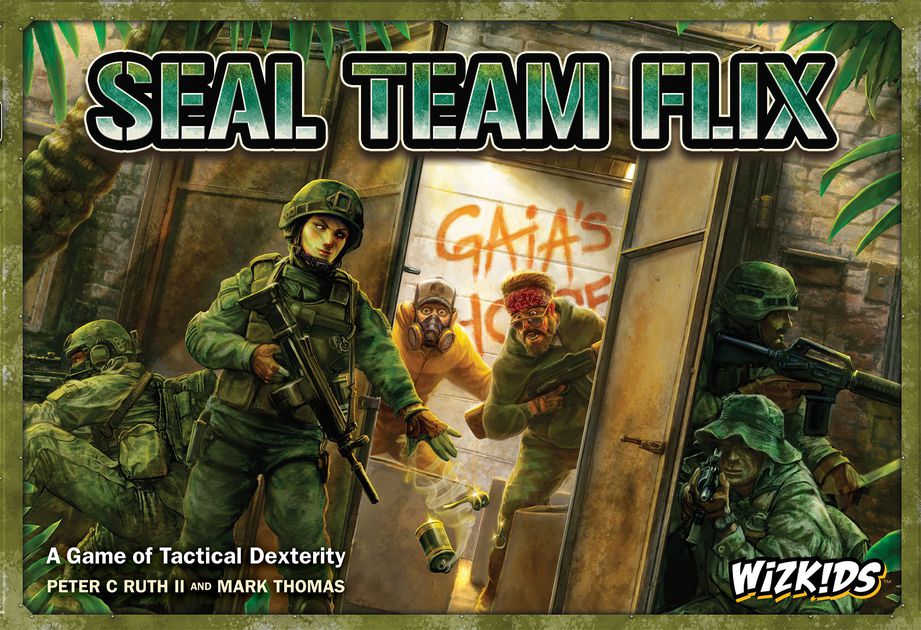 The military shooter is ingrained in gaming culture. Tom Clancy’s Rainbow Six and Ghost Recon, Call of Duty: Black Ops, even the incredibly detailed Arma – these are stalwarts that provide hours of battle stories for the pub. Yet no one has managed to bring Counter Strike or its ilk to the analog world. That’s no longer the case as tangos have taken our table hostage. We don’t negotiate with terrorists, so send in the team – just keep your trigger finger limber. 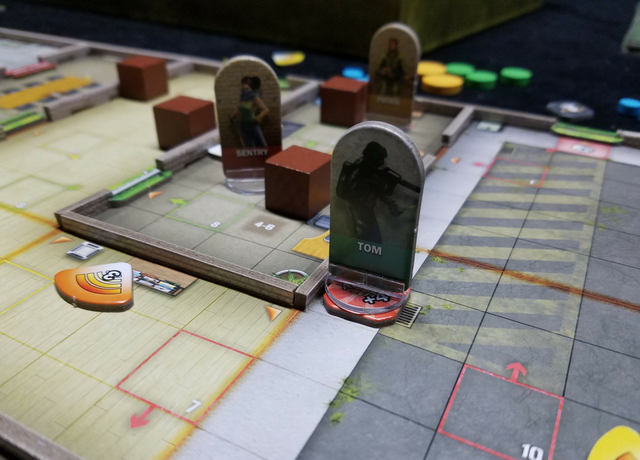 This is a cooperative design not unlike a dungeon crawl. You maneuver a team of counter-terrorist operatives across an office or warehouse of perfectly gridded turf. You count spaces, open doors, and neutralize the enemy by flicking discs at their surly standees. The closest resemblance is Catacombs but even that comparison is faint.

Seal Team Flix is an oddity in that it melds simulative military elements with hilarious dexterity mechanisms. This juxtaposition is threaded throughout play. We see this with a multitude of detailed weapon loadouts, each offering varied rates of fire and different sized discs to flick. There’s a sophisticated AI procedure with different types of units, each featured on a modest standee that’s just waiting to be blasted down the corridor and tumble end over end.

The single most fantastic element are the sideboards. The design packs in several mini-games that are a delight to behold. You can pick electronic locks by flicking little discs off a keypad. Snipers can forego making a dexterous shot on the main board by carefully nudging a disc onto a target reticule. You can even disarm a timed bomb by blasting pieces off the explosive while under the pressure of a sand timer.

It’s simultaneously direct, almost whimsical fun combined with this edgy tone of grit. That may be a challenge for some to cope with, but it hits me square in those electric parts of your brain just waiting for a source of ignition.

Designers Peter C. Ruth II and Mark Thomas went all in. This huge box includes six enormous single piece maps, a fully-fledged branching campaign, and a multitude of abilities and gear to utilize. It’s awe-inspiring and the level of commitment is near ridiculous. This game is out to make a statement, and it succeeds in nearly every way.

That dedication and level of complexity within the scope of the product does make for a slower go of graduating boot camp. Your first mission or two will be a little lethargic. The most joyous moments of the game – making incredible shots and engaging in those sideboards – rear their head often enough to keep you going, but handling the refined AI for the enemy units will feel procedural. There are a number of phases to the game and they can sap some of the energy as you become acclimated.

Fortunately, this hurdle fades somewhat rapidly. The behavior will internalize after your first couple of scenarios and the work of managing tangos will subside, leaving a sensation of dramatic action overriding the arc of play.

Another challenge with this design is in carefully handling the subject matter. The game eschews the easy path of presenting an enemy of Middle Eastern stereotypical radicals, and instead presents an OPFOR (that’s opposition force in my sophisticated military gaming tongue) of anti-humanists that want to see their species extinguished. They worship the earth and seek to preserve it by extricating the cancer of humankind. While I can’t really blame ’em, I can certainly still shoot ’em with a wooden disk. 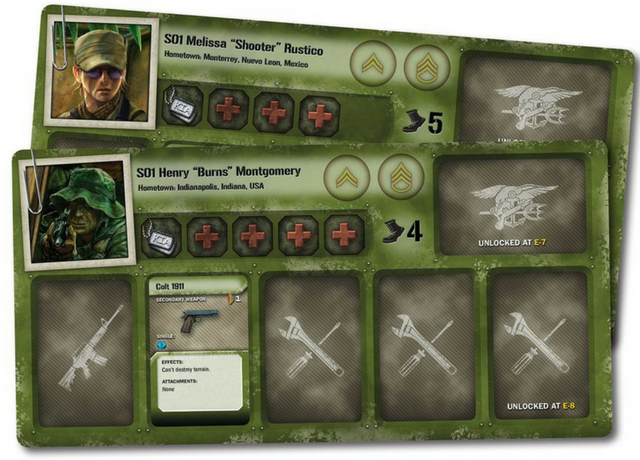 Physically, this is also perhaps Wizkids’ greatest release. As a company, they have struggled in the past to keep up with their peers but Seal Team Flix shows no signs of that. The single piece boards are enormous and slotted with punch-out walls that form boundaries for you to bank and skip your 9mm rounds off of. There is a general issue of some tightness and difficulty at times in shoving the door pieces into their slots, but for the most part it’s actually quite remarkable how well everything comes together. The only large gaffe is accidentally leaving marked positions for sentry placement off the final production, but this is rectified easily enough by referencing the mission diagrams.

It’s remarkable how significant this game feels in both presence and gameplay. It comes across as a throwback of sorts to the FFG coffin-box releases due to that footprint and level of sophistication. The fact that it doesn’t include minis may be a downer for some, but this is certainly leveraged to deliver the excellent price point of $60 MSRP. That’s almost absurd in a post-Kickstarter world of games reaching for the $200 mark.

This is a design of silent moments and held breath giving way to furious high fives and sore bronchial passages. It’s novel and quite addictive. It’s even extremely difficult propelling repeated play and focused intensity. Take all that and cram it inside that massive box of cardboard goodness and you have one of 2018’s most definitive releases.

What are your favorite dexterity games? Let us know in the comments!  And be sure to join host Becca Scott on  Game the Game every Thursday here on Geek & Sundry to watch the best boardgames played with fantastic guests!