Savage Worlds: Explore A Myriad of Universes with One Ruleset - Nerdist

Savage Worlds: Explore A Myriad of Universes with One Ruleset

It takes a group awhile to click on a new system. Some people catch on quick, but there’s that one player that is still staring at their character sheet in confusion six months in. A lot of GMs stick to one game to keep the sessions flowing, while others just tough out telling players the same thing every week until they learn the new system.

Savage Worlds is the best of both worlds: a solid base set of rules and a ton of games that use them. Savage Worlds Deluxe introduces you to the fast and flexible system. 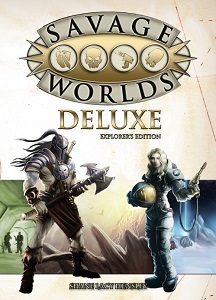 All players (also known as Wild Cards) start out with a d4 in all their attributes. This is a point buy system so terrible dice luck in character creation doesn’t affect you. The better you are at something, the higher die type it gets. Skills are the same in that if you want to be an expert archer, buy your shooting skill all the way to a d12. Edges and Hindrances give you and your GM backstory to play with and your character some personality.

When you make a roll, it’s your skill or trait plus a d6, keep the higher result. Maxed out the die? Keep rolling and adding it to the total. Yes, you can get double digits on a d4; I’ve seen it happen.

The thing I love about this system is initiative. Everyone is dealt a card from the deck. Order of play goes from Aces to Two and you get dealt new cards for the next round. There are some Edges that allow you to exchange bad cards for another draw from the deck. If you pull the Joker, you get to go whenever you want and get a boost to your rolls for that round.

Your dice hate you tonight? Spend a Benny to reroll.  Bennies are your extra bit of luck. You start each session with three, but your GM can award them for good role playing or anything else, including playing your Hindrances well.

All versions of Savage Worlds use the same basics with each system adding its own flavor. With all the different flavors available, may I suggest some books and movies to give you inspiration for your game? Here are a few of my favorites:

Things that go bump in the night aren’t just the overactive imaginations of little kids. Set in Pinebox, TX where things aren’t always what they seem. These will bring more horror to the table. Think Buffy the Vampire Slayer and Supernatural TV shows. Just any Urban Fantasy book would also work (Dresden Files by Jim Butcher or Mercy Thompson by Patricia Briggs are my top choices).

50 Fathoms & Pirates of the Spanish Main

Everyone loves a good pirate adventure. Get yourself a boat and a crew to sail the high seas. 50 Fathoms has more of a magic spin while Pirates of the Spanish Main is just straight piracy. You’ll want to watch some Errol Flynn movies or Pirates of the Caribbean to get in the mood. Treasure Island by Robert Louis Stevenson wouldn’t go amiss here either.

These are going to expand on the superpowers introduced in the main book and give you ideas if you want a gadget powered superhero. Necessary Evil is geared more to playing villains. Inspiration should include Suicide Squad or any super hero movie from the last decade, unless you want your game to be cheesy and then you want Adam West Batman. Comic books are the thing to read for ideas on characters to make.

It’s time to go to the wild west. Only this isn’t your daddy’s western. Magic and mundane mix in this take on the old west. Grab your sixshooter and go hunt some monsters. Just about any Western or Westworld will get you rolling. Louis L’amour mixed with some H.P. Lovecraft for the creepy aspects. 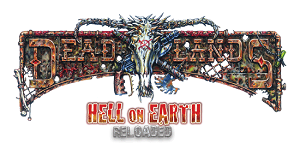 Someone had the great idea to make weapons with nuclear fission, nuclear fusion, and ghost rock. Welcome to a post-apocalyptic wasteland that was the result. Magic mixes with toxic powers. Survive if you can in this desolate wasteland. Go watch the Mad Max movies or Tank Girl.

Set in the Deadlands world in the 1930s. This is your pulpy, dark era. Try surviving a corrupt government while fending off the things that lurk in the shadows. Make your own hard boiled private eye or crazy inventor. You’re going to want to go with some old fashioned pulp novels for this setting. Dick Tracy? Good choice.

Fans of the series by Palladium books will love a spin in this multi-genre game. Every universe you could think of is connected through a rift on the Earth. This is your blender of games. Want to play a cyberpunk while your buddy plays a gunslinger from the wild west? You can do it. The sky’s the limit on this one. Choose your own adventure on what mix of inspiration you want.

These aren’t the only games that use the Savage World engine. Other games include: Lankhmar, Rippers, Space 1889, Last Parsec, Savage World of Solomon Kane, Sixth Gun, and all of the Weird Wars. Hope this gives you some ideas to use to start utilizing Savage Worlds in your group. It’s a little overwhelming to start up a new game, but having one that can do just about everything is a great way to keep your sessions fresh and moving along. Enjoy the multi-tool that is Savage Worlds.

Do you agree or have other ideas for inspiration? Let us know in the comments!

Dawn Dalton is an aspiring author, gamer girl, and former manager of a game store. She can be found on Twitter.
Top Stories
Television