Love boardgames? So do we! Join host Becca Scott as she breaks out the best in tabletop games every week on How To Play and Game the Game every Tuesday and Thursday here on Geek & Sundry!

Before the invention of the internet, the best place to see the strange and unusual was when the circus came to town. The old circuses featured the big attractions under the big top, the midway features games of chance and skill, and then the sideshow featured all sorts of acts and artifacts for the locals. Barkers stood outside the tents delivering sales patter and exaggerations to convince the “rubes” to part with a little extra money to see things like the Dog-Faced Boy or the Crystal Skull.

Overworld Games captured the spirit of these slightly dangerous, always curious experiences with its new game Barker’s Row. Kickstarter backers received their copies not too long ago, and we received a copy to take a closer look behind the curtain.

Barker’s Row is a set collection game where each player is a barker trying to lure rubes from the midway into their sideshow. The Midway is where cards are drawn from a common deck and placed face up. Each card represents the interests of potential customers in one of four suits: Horrors, Beasts, Freaks, and Oddities. A fifth suit acts as a wild card and can trigger a chain of draws from Baker’s Row to get a lot of people milling about the Midway. Players take turns drawing cards from the Midway to put their attractions into play. 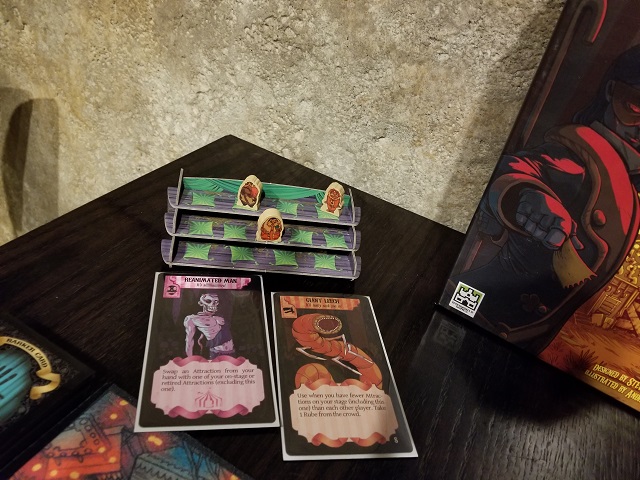 Each Attraction gives players victory points which are displayed in an unusual way. The victory points are represented by meeples that sit in the player’s grandstand and watch the attractions unfold. The tricky part of the game is that as players climb the victory point ladder it takes more and more cards from the Midway to bring an attraction into play.

The rubes want to see bigger and better attractions, so if another player has a mummy in their tent, the other players need to one up that attraction. Players can choose to retire an attraction to use its special ability during a turn. The rising difficulty to bring out more attractions keeps the race for attention tight and games can be won or lost on using attraction special abilities when the cards are just right.

Barker’s Row is an excellent card game to play in-between longer games or one that plays well a few times in a row. The cards have a wicked sense of humor, with classic sideshow attractions drawn in an art style that’s a little bit colorful and a little bit creepy. It’s a game that’s easy enough for kids who can handle the spooky art and also for friends who aren’t into board games but want to try something with a hint of the unusual. Anyone who missed the Kickstarter can upgrade with the Midway playmat, extra rube meeples and sleeves for the attraction and barker cards on the website.

What’s your favorite quick-playing card game? Tell us in the comments! And be sure to join host Becca Scott on Game the Game every Thursday here on Geek & Sundry to watch the best boardgames played with fantastic guests!