Rise, Conquer, and Rule in COURT OF THE DEAD: MOURNERS CALL

The eternal battle between the forces of Heaven and Hell rages on in the Underworld. There is no longer a distinction between good and evil; the war has become a contest for supremacy, as each side uses mortal souls to power its war machines. Death himself has created the Court of the Dead in an attempt to end the war once and for all, freeing both the living and dead.

Court of the Dead: Mourners Call is a board game based on the characters and universe created by Tom Gilliland. You and your fellow Mourners will enlist the Bone, Flesh, and Spirit factions of the Underworld and seek to become the one who unites the forces to end the war between Heaven and Hell. Will you be the champion to restore balance to the universe?

This area control, card drafting, and hand management game is played in a series of rounds (typically three) in which players attempt to gain the most points through their influence of the three factions, collecting unity tokens, and completing their ulterior motive. You can check out a quick overview of setup and rules with Becca Scott:

Etherea is distributed at the start of each round, as are the Court cards. On your turn you’ll perform an action; some are free such as playing a Court card, while other actions require spending Etherea. The gorgeously dark world of Court of the Dead is represented on the game board, where you’ll place your guild figures on destinations, hoping to gain Etherea, unity, or influence with the three factions. Wallows cards offer quests for additional points during each round. 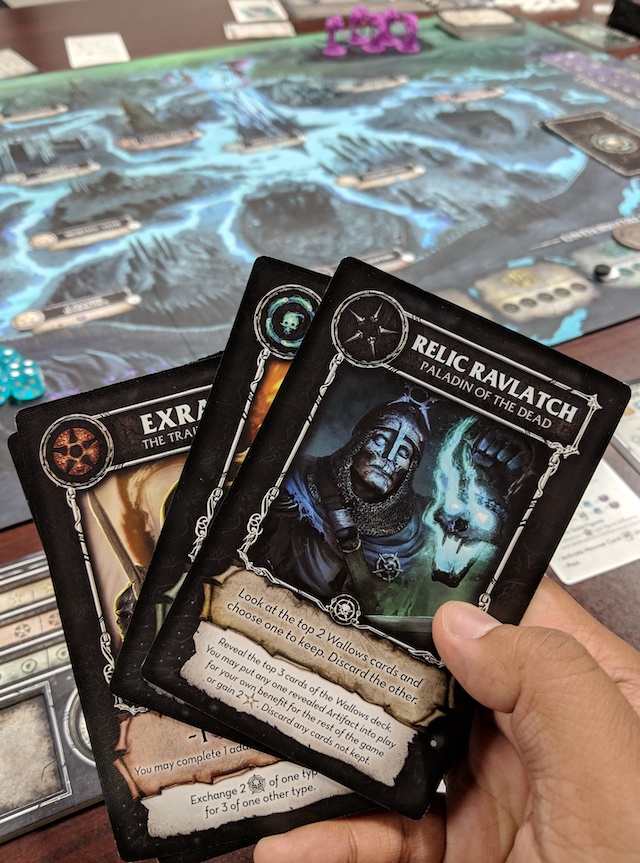 You’ll also recruit Mourners from the Court, including Death himself! These Mourners offer powerful abilities to the player who chooses them each round. While the game is played competitively (after all, only one player may unite all of the forces and be declared champion), you’ll have to work together to manage the Celestial Suspicion meter; with every action and event, players risk an early war between Heaven and Hell. When the meter hits 13, players lose influence and unity points, decreasing their chances at winning the game.

But that’s not it! Players must also keep an eye on the Dreadsgrip Threat meter. If it’s at level 10, then the Dreadsgrip rises up and destroys figures from those players foolish enough to raise its ire. Players continue taking one action per turn until all players have passed and the round ends. At the end of each round players are required to pay a celestial tithe; whoever donates the most will earn additional unity points. 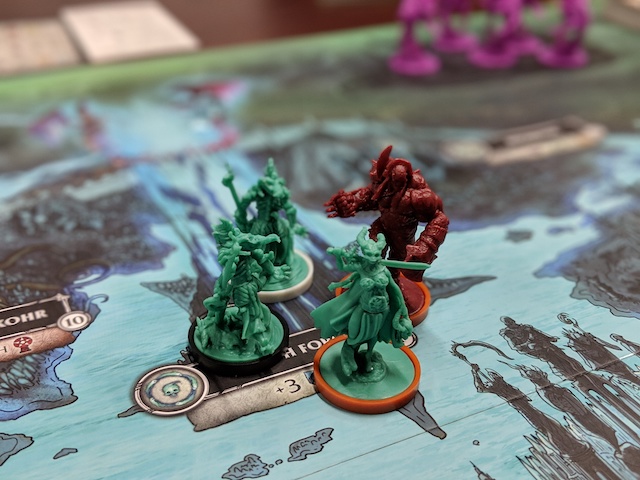 The stunning presentation of Court of the Dead: Mourners Call, from its board and components to the beautifully sculptured miniatures is nothing short of spectacular. Each player has their own player board to track their etherea, unity, and faction influence points, and it’s the semi-cooperative play that provides tension throughout the game. As you perform actions, it’s imperative to keep track of the Celestial Suspicion and Dreadsgrips meters. Failure to do so will result in crippling losses not only to your opponents but also to you.

It’s this delicate balancing act of trying to perform actions while helping stave off the Dreadsgrip and the celestial forces that set Court of the Dead: Mourners Call apart from the current slate of area-control games. It requires a keen sense of planning and an ability to change tactics as the game develops. Bringing balance to the universe isn’t an easy task, nor should it be.

You can see the game in action in this episode of Game the Game:

Want to get your hands on the game? Summon the game at  CourtoftheDead.com.