It’s time. Author Rick Riordan, perhaps best known for his wildly popular and beloved Percy Jackson series, announced his next book back in February. He shared the news about Daughter of the Deep, his modern take on Jules Verne’s 20,000 Leagues Under the Sea. The story centers on Ana Dakkar, a student at a high school, Harding-Pencroft Academy, that graduates the best marine scientists, naval warriors, navigators, and underwater explorers in the world. She’s about to go on quite the adventure below the water. And Nerdist has the exclusive reveal of the cover and an excerpt from the upcoming book.

As with Riordan’s other work, it’s all about the action, humor, and relationships—those between classmates, friends, and enemies. Ana goes with the class for a weekend trial at sea, but on the way to the ship, a terrible tragedy occurs (more on that in a moment). There’s a rival school to consider, a quest, danger. Whew. All of it.

Take a trip under the sea and behold the cover for Daughter of the Deep, featuring art by Lavanya Naidu. 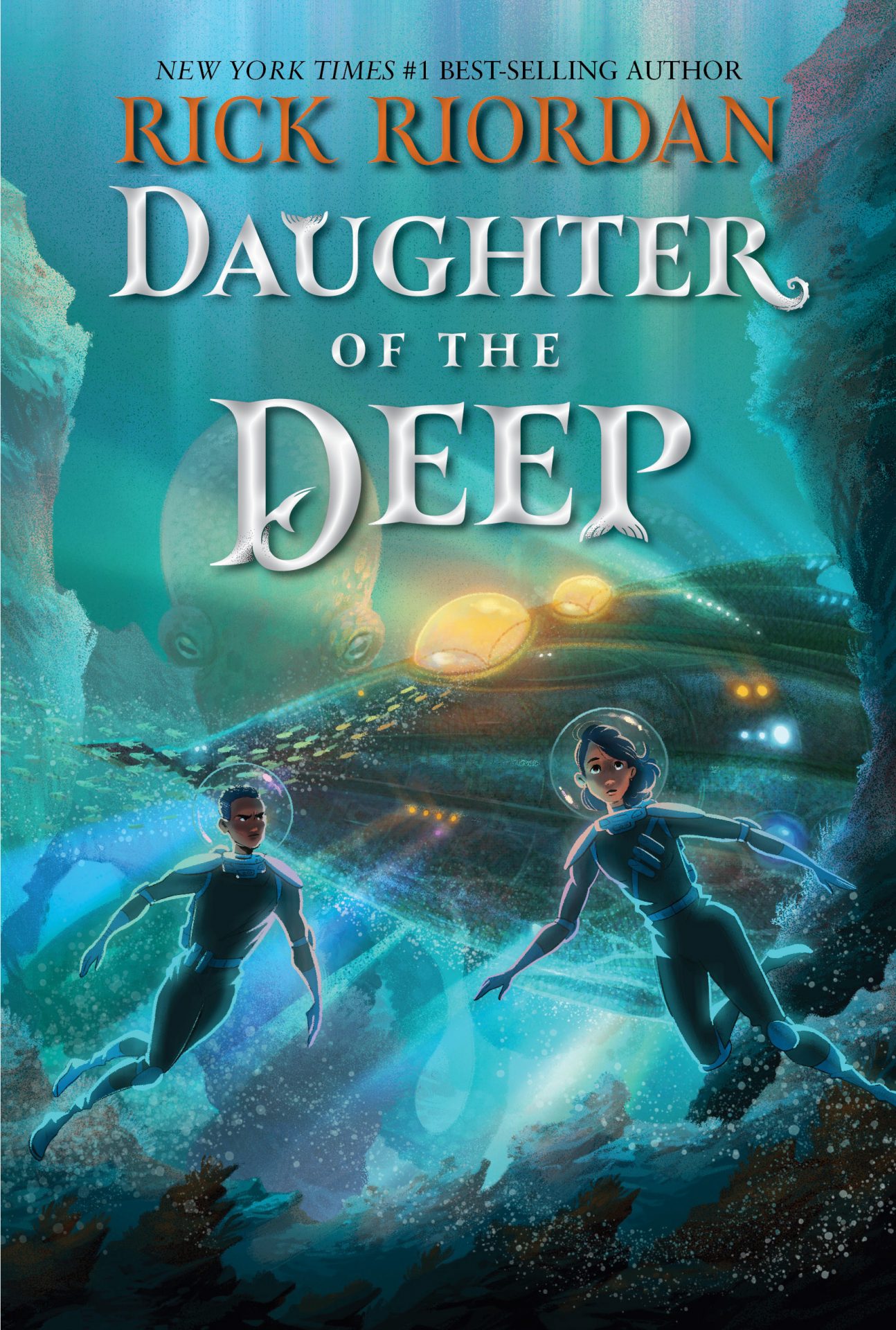 I already cannot wait to get lost in this world. Riordan tells Nerdist, “I am so thrilled to share Daughter of the Deep with my readers — it really is like nothing I’ve ever written before, and it is just the right kind of wild freewheeling adventure we all need right now! Lavanya’s cover makes me even more excited. She has done a marvelous job capturing the essence of the story, which I hope will honor the science fiction legacy of Jules Verne, and offer an optimistic view of what human genius can accomplish when we set our minds to work.”

But wait. We have more. You can really dive into (I apologize for that terrible pun) Daughter of the Deep with an excerpt from chapter three. Please appreciate the part where Ana thinks Theoretical Marine Science should be a fluff class. And that tragedy I mentioned above? You’ll see what that’s all about.

“Freshmen.” Dr. Hewett says the word like an insult.

He stands in the aisle, bracing himself with one hand on the seatback. He breathes heavily into the bus’s microphone. “This weekend’s trials will be very different from what you might be expecting.”

This gets our attention. Everybody fixes their eyes on Hewett.

The professor is shaped like a diving bell—narrow shoulders tapering down to a wide waist, where his rumpled dress shirt is half untucked from his slacks. His frazzled gray hair and sad, watery eyes make him look like Albert Einstein after a night of running failed calculations.

Next to me, Ester shuffles through her index cards. Top rests his head in her lap. His tail thumps softly against my thigh.

“In thirty minutes,” Hewett continues, “we will arrive in San Alejandro.”

He waits for our whispering to die down. We associate San Alejandro with shopping, movies, and Saturday-night karaoke, not end-of-year trials. But I suppose it makes sense we would start there. The school’s boat is usually moored in the harbor.

“We will proceed directly to the docks,” Hewett continues. “No detours, no side trips to buy refreshments. You will keep your phones off.”

A few kids grumble. Harding-Pencroft strictly controls all communication through the school intranet. The campus is a cellular dead zone. You want to look up the breeding habits of jellyfish? No problem. You want to watch YouTube? Good luck with that.

The teachers say this is to keep us focused on our work. I suspect it’s yet another security precaution, like the underwater grid, or the armed guards, or the drone surveillance. I don’t understand it, but it’s a fact of life.

Typically, when we get into town, we’re like dehydrated cattle at a watering hole. We stampede to the first place with free Wi-Fi and drink it in.

“I will have further instructions once we’re at sea,” Hewett says. “Suffice to say, today you’ll find out what the academy is truly about. And the academy will find out whether you can survive its requirements.”

I want to think Hewett is just trying to scare us. The problem is, he never makes idle threats. If he says we’ll have extra weekend homework, we do. If he predicts 90 percent of us will fail his next exam, we do.

Theoretical Marine Science should be a fun fluff class. We spend most of our time contemplating what ocean technology might look like in one or two hundred years. Or if science had taken a different course, what might have happened? What if Leonardo da Vinci had done more to develop sonar when he discovered it in 1490? What if the plans for Drebbel’s “diving boat” hadn’t been lost in the 1600s, or if Monturiol’s anaerobic  steam-powered submarine hadn’t been scrapped for lack of funding in 1867? Would our technology today be more advanced?

It’s cool stuff to think about, but also . . . not so practical?

Hewett acts as if his questions have right answers. Like, it’s theoretical. How can you give somebody a B minus on their essay just because their guess is different than yours?

Anyway, I wish Colonel Apesh, our military-tactics professor, were chaperoning this trip. Or Dr. Kind, our physical fitness teacher. Hewett can barely shuffle a few feet without getting winded. I don’t see how he’s going to judge what I imagine will be intensely physical underwater trials.

He turns over the microphone to Gemini Twain. Gem has made our group assignments for the weekend. We’ll be divided into five teams of four, one member from each house. But first, he has a few rules to tell us about.

Of course he does. He is such a Shark. You could put him in charge of a toddler soccer team and he’d get delusions of grandeur. He’d have the kids marching in perfect unison within a week. Then he’d declare war on a neighboring toddler team.

He rattles off a list of his favorite regulations. My attention wanders. I look out the window.

The highway winds from switchback to switchback, hugging the cliffs. One moment, you can’t see anything but trees. The next, you can trace the entire coastline all the way back to HP. When the school is in full view, I spot something strange in the bay. A thin line of wake heads toward the base of the cliffs, just where Dev and I were diving this morning. I can’t see what’s making it. There’s no boat. It’s moving too fast and too straight to be a sea animal. Something underwater, under propulsion. The pit of my stomach feels like I’m free-falling again.

The wake line splits into three segments. It looks like a trident, its prongs racing to jab the coastline beneath the school.

By the time Ester and Nelinha get to the window, the view has disappeared behind trees and cliffs.

“What was it?” Nelinha asks.

Then the shock wave hits us. The bus shudders. Boulders topple into the road.

“Earthquake!” Gem drops the mic, literally, grabbing the nearest seatback to steady himself. Dr. Hewett is thrown hard against the window.

Cracks splinter the asphalt as we skid toward the guardrail. All twenty of us, well-trained freshmen, scream like kindergarteners.

He slows, looking for a place to pull over. We round another bend, and HP comes into view, except now . . .

Ester screams, which starts Top whimpering in her lap. Nelinha presses her hands against the glass. “No. No way. No.”

Bernie pulls into a turnout—one of the scenic overlooks where tourists can snap pictures of the Pacific. The view is clear all the way back to HP, but there’s nothing scenic about it now.

Kids are crying. Their faces press against the windows. My insides twist with disbelief.

A second shock wave hits us. We watch in horror as another massive wedge of earth calves into the bay, taking the last of those beautiful sugar cubes with it.

I shove my way down the aisle. I hammer on the doors until Bernie opens them. I run to the edge of the cliff and grip the cold steel guardrail.

I find myself mumbling desperate prayers. “Three-Eyed One, Lord Shiva, who nourishes all beings, may He liberate us from death. . . .”

But there is no liberation.

My brother was on that campus. So were 150 other people and an aquarium full of marine animals. A square mile of the California coast has crumbled into the ocean.

Daughter of the Deep arrives on October 5, 2021. You can place a pre-order now.

TAGGED: Daughter of the Deep, 20000 Leagues Under the Sea, Rick Riordan