Return of the Daleks: Exterminate Your Way Through the Doctor Who Season Premiere - Nerdist

Return of the Daleks: Exterminate Your Way Through the Doctor Who Season Premiere

Last weekend, the BBC and BBCA premiered the 9th season of modern Doctor Who with “The Magician’s Apprentice.” The episode brought back Davros, the Kaled scientist who created the Daleks and the Dalek Empire (wait, are they an Empire again yet? There don’t seem to be a lot of them). It also brought back the Dalek homeworld of Skaro, which has been destroyed and brought back a couple of times so, honestly, that’s a little less special than you’d think.

But we didn’t just see modern Daleks in the episode. There were quite a few nods to the past. So, here’s a quick and easy Dalek guide for you continuity fans out there!

1963 style Dalek greets our heroes outside of the Dalek city. This is how the creatures appeared when they made their debut in the second on-screen Doctor Who story, a multi-part adventure known collectively as “The Daleks.” Notice the lack of solar power panels around the mid-section. These Daleks drew power from static electricity and required metal floors beneath them.

So… come to think of it, it’s pretty odd that this particular Dalek is seen outside, gliding on the ground. A big plot element in their introduction story was that this model of Dalek couldn’t leave the city or it would instantly lose power. Huh. Maybe it has an extra battery attachment we can’t see.

Many later models looked just like this except with solar panels around the mid-section. 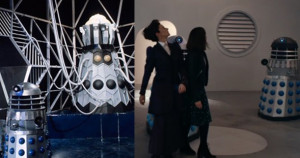 In the Second Doctor adventure, “The Evil of the Daleks” (1967), we met the original Dalek Emperor. This story explored the Doctor introducing empathy and other human emotions (the “human factor”) into a small group of Daleks. It was also intended to be the last Dalek story and it would be another five years before we saw the villains again.

During this story, the Dalek Emperor’s personal guards looked like your standard Dalek but with a black dome. An identical Dalek can be seen when Clara and Missy are brought before the Supreme Dalek. Like the 1963 model Dalek, “The Magician’s Apprentice” is the very first time we’ve officially seen this model in full color in a Doctor Who episode. 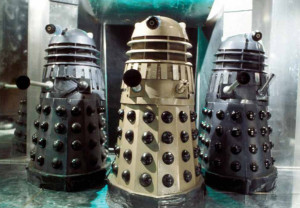 Starting in the Third Doctor story “Day of the Daleks” in 1972, the standard Dalek soldier was gray and black. This design would be used for all standard Daleks throughout the next 17 seasons until the original Doctor Who show was canceled.

In “Genesis of the Daleks,” which is basically the opening shot of the Last Great Time War and features the first meeting between Davros and the Doctor, we saw that the prototype Daleks also sported this look. 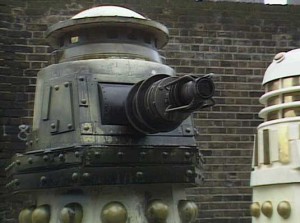 First appearing in the Seventh Doctor story “Remembrance of the Daleks” (1988), the Special Weapons Dalek was introduced when something a little extra was needed. This monster did not bother with manipulator arms or the standard weapon. It was a Dalek with a cannon and a “let’s just blow up everything” attitude. Basically, the thing is a living, angry tank. It’s simplicity has helped make it a fan favorite for many over the years, so it’s cool to see it back in action.

We also saw this model in “Asylum of the Daleks,” the episode that was Jenna Coleman’s first on-screen appearance in Doctor Who. 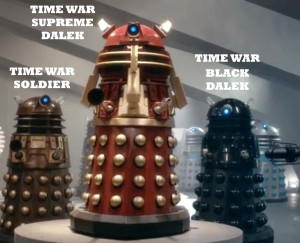 During the Third and Last Great Time War, the Daleks sported new designs and got slightly taller. Fans got to see these models later on, since it turned out a fair number of Daleks survived the war.

Standard soldiers during the Time War sported a bronze look.

Black Daleks had existed before the Last Time War and acted as military generals, but now they too were taller and a bit more fearsome looking. One Black Dalek we met before was Dalek Sec, leader of the Cult of Skaro.

There had been different Daleks before who took the title of Supreme Dalek–in fact, there used to be a whole Supreme Council–but the Time War era one had a unique, expanded look with a red finish. All of these models are seen in “The Magician’s Apprentice.”

Hey, wait, wasn’t this version of the Supreme Dalek destroyed before? Oh, well. I guess another Dalek took his place and got similar armor. 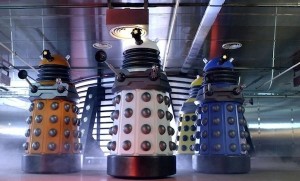 Hey, these particular Daleks are absent. Weren’t they supposed to be the new breed of super advanced Daleks? Well, in the past the Dalek Empire has split in two between those who believe Davros is valuable and even the rightful leader, and those who think Davros needs to be left in the past and that those who ally with him are false Daleks. So maybe the New Dalek Paradigm group is somewhere else in the universe. Or maybe Davros thought their armor designs were too colorful and had them wiped out.


Were you excited to see such a variety of Daleks in the premiere? What are you looking forward to in the coming season? Let us know in the comments!

Alan Kistler (@SizzlerKistler) is a pop culture historian, freelance writer and author of the New York Times Best Seller Doctor Who: A History.