Relive a Cult Classic in Big Trouble in Little China: The Game - Nerdist

Relive a Cult Classic in Big Trouble in Little China: The Game

Big Trouble in Little China (BTiLC) is a cult-classic movie that is as wacky as can be. This martial arts comedy film was directed by John Carpenter, who made some of my favorite classic 80’s horror movies like The Thing, Halloween, and Escape from New York. 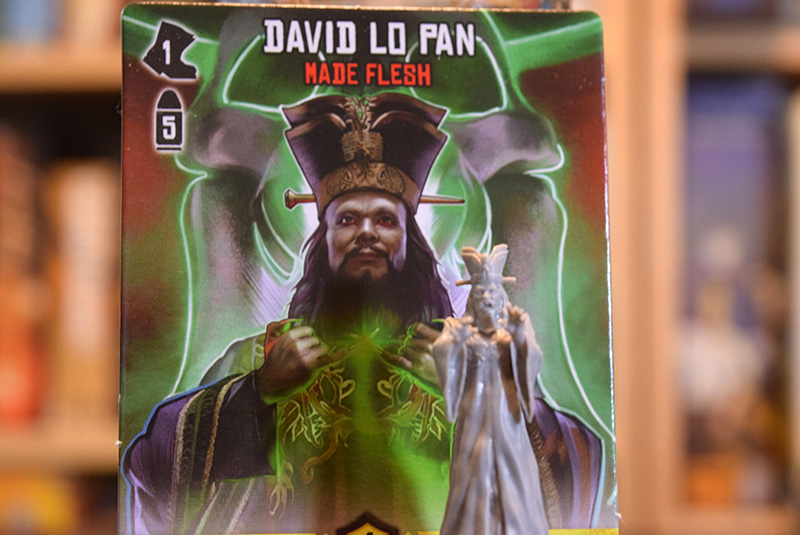 In BTiLC, the evil sorcerer Lo Pan is looking to marry a greened-eyed woman (and then promptly sacrifice her) so that he can break a centuries-old curse and finally enact his plans to take over the world. Our unlikely heroes Jack Burton and Wang Chi are trying to rescue Wang’s fiancee from Lo Pan as this whole kidnapping/marriage/sacrifice thing is a real raw deal, but first, they must fight their way through Lo Pans goons; street gangs, supernatural thugs, and even a beholder at one point. 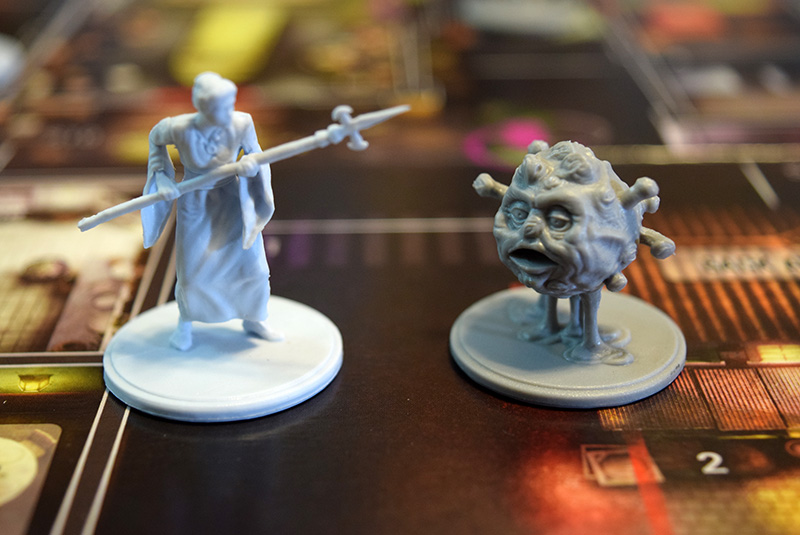 The movie is goofy, fun, and now comes in board game form! Everything Epic and Flipside have collaborated to publish the cooperative board game, Big Trouble in Little China: The Game, which lets you play through missions in iconic locations from the movie until you build up the audacity to fight against Lo Pan himself. The developers, Boris Polonsky and Christopher Batarlis, have a deep love for Big Trouble in Little China and according to Boris, that shared love for the film is what first spurred them to develop the game. 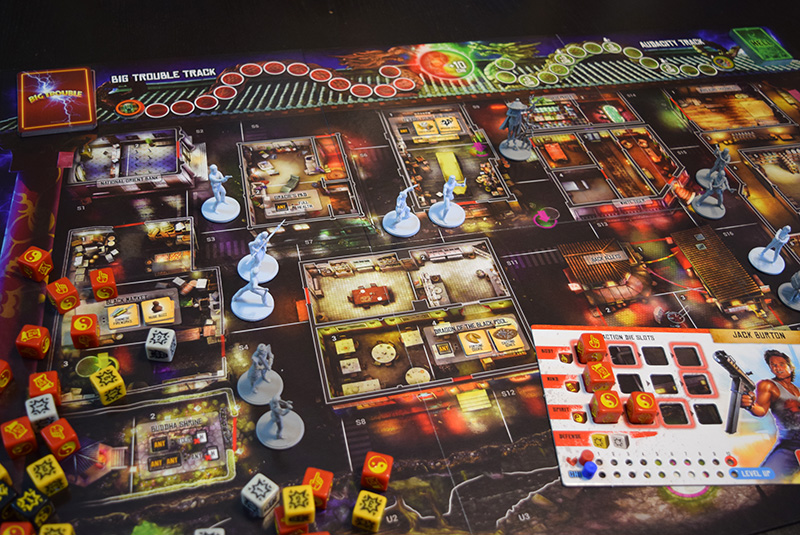 When working on BTiLC, they wanted to make sure that the game captured the essence of the film. When asked about the feel of the game, Boris pointed out that, “Part of what makes the movie so great is that it blends different genres like action, comedy, fantasy, and kung-fu with very memorable characters. We knew from the start that we wanted the players to feel like they were in that world, playing parts of the story they knew, as well as making new experiences that were in the spirit of the film. We made a double-sided, immersive game board, that was crammed with little details that would help bring the players into the space. We spent a large portion of the development time writing 90 pages of quest stories, incorporating lines and story details from the films to give a sense of a familiar narrative while adding new elements. And we made sure that all of the original art and sculpts were not only faithful to the source material but also captured the fun tone.” 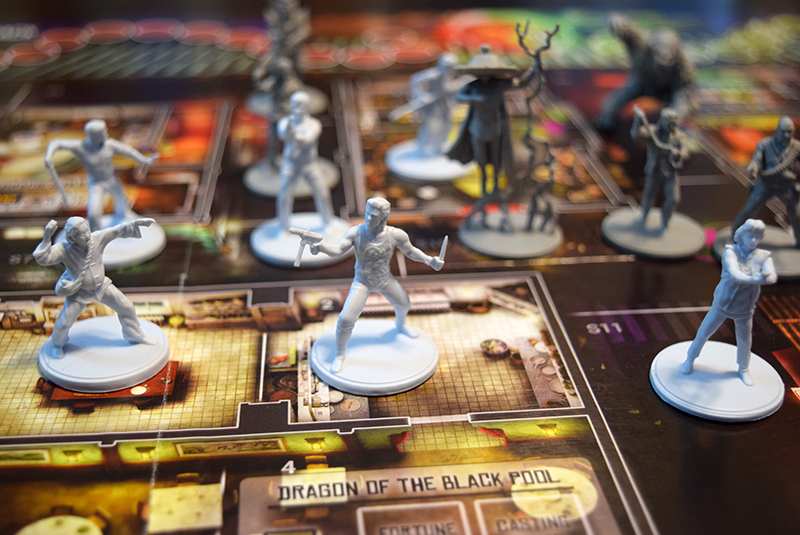 Big Trouble in Little China: The Game is humongous and beautifully illustrated; giving you a ton of iconic locations to explore and thematic quests to accomplish. My favorite part of the game is the minis and Boris agrees, but working on new lore for the BTiLC story was a close second for him. Boris says, “We were able to write some fun stuff for characters that didn’t get as much screen time in the film, like Margo and Eddie.” 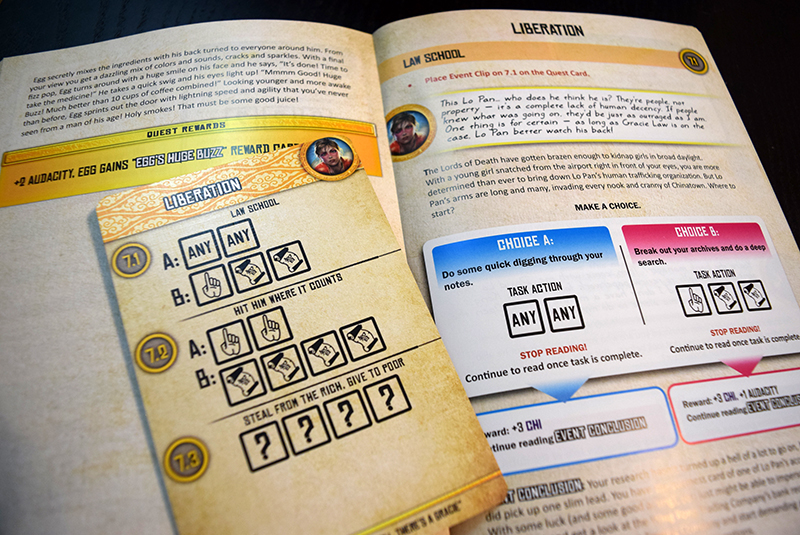 If you are a fan of the movie and enjoy co-op adventure games with lots of theme and story, then make sure to check out Big Trouble in Little China: The Game. Chris and Boris have worked really hard to make the game an immersive experience in the BTiLC story. Boris says, “We want the fans to be the ultimate judge, but to us, we feel that we really accomplished something special by capturing the essence of the film in a fun and replayable game that stands out from most other licensed games out there and we are planning to bring more stories and experiences to Big Trouble with future game expansions.”

If you want to learn how to play, check out Becca’s How To Play video below!

Think you’ve got what it takes to end Lo Pan’s evil plans? Grab your copy of the game at bigtroublegame.com!