How many game controllers have you ruined in the past by getting just a little too emotionally involved in your virtual exploits? I’m not talking throwing the controller against the wall, now; more of a “mashed the buttons so hard they finally stopped responding” kinda deal. We may not have all been there, but certainly some of us have, and wondered why the buttons maybe couldn’t be constructed from something harder. Well, ya know, there’s not much that’s harder than diamond. But it’ll cost you.That’s right: via Anime News Network, thanks to Brikk, a company known for ultra-high end tech accessories and timepieces, you can have a PS4 controller with gold buttons topped with conflict-free diamonds. The entire controller is also coated in 24K gold, and it’ll only cost you a mere $13,995. Luckily for you, there’s also a bargain version in which the only such button is the PS button, and the rest are made from the usual material. This is a comparatively cheaper $8,495, which probably sounds like a much bigger bargain now that you’ve heard what the other one runs. The aluminum case is included. 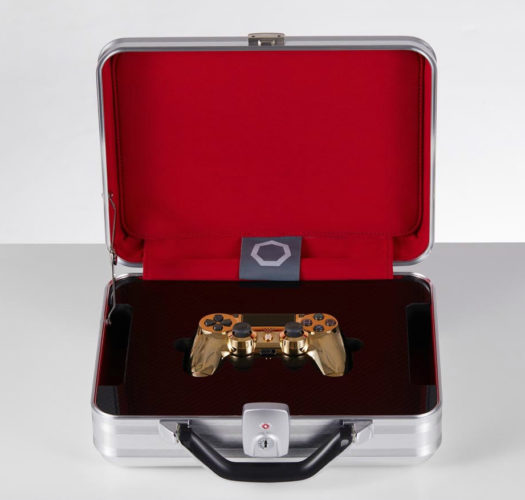 But wait! As they say on infomercials, there’s more:

THE CONTROLLER CAN BE PLATED IN PLATINUM, ROSE GOLD, BLACK RHODIUM OR RAINBOW TITANIUM, AND THE BUTTONS CAN BE MADE OUT OF TITANIUM, CARBON, ZINC, OR MAGNESIUM. EMBELLISHMENT OPTIONS INCLUDE HIGHER GRADE DIAMONDS OR ALTERNATIVE GEMS INCLUDING RUBIES, SAPPHIRES, EMERALDS, AND MANY OTHER PRECIOUS STONES. FOR THE PERSPICACIOUS INDIVIDUAL, DOME SHAPED THUMBSTICKS INCLUDING CUSTOM STICK HEIGHTS AND TRIGGER STOPS CAN ALSO BE ADDED, WITH BOARD MODS LIKE DISABLING VIBRATION, FASTER RAPID FIRE, AND MULTIPLE CUSTOM GAME SPECIFIC CONFIGURATIONS.

Cost adjustable depending on your choices, obviously. But at least it probably won’t break any time soon.Do you know anyone who’ll be buying one of these? Tell us how it goes in comments.