If there is one type of creature that competes with dragons for space in most geek imaginations, it’s the dinosaur. Leave it to Monte Cook Games, creators of Numenera and The Strange, to tap into this simmering love of prehistoric beasts to fuel their latest release, Predation.

“I’ve loved dinosaurs since forever,” said Germain, “and watching all of the discoveries come out in the past few years has been hugely exciting to me. So the biggest influence for me was science. Everything from feathers and cooing dinosaurs to smart fabrics and far-future energy options. I spent a lot of time talking to scientists, visiting museums, reading up on future predictions, and all of that went into the setting and the game.”

In Predation, a megacorporation from the future known as SATI starts sending people back in time to the late Cretaceous period for top-secret reasons. These “commuters” as they are known are most scientists with access to laser guns, smart fabrics, cybernetic technologies and other cool future tech. But something went wrong. Time travel stopped working, the bridge between the future and past collapsed and stranded all of those commuters in the past. 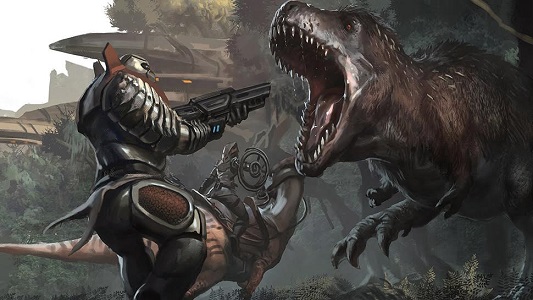 The player characters are the descendants of those early commuters, who grew up alongside the dinosaurs. They live with a mixture of the future tech (that’s aging and sometimes functional) in addition to whatever they’ve been able to cobble together from the time period. Giant bioengineered dinosaurs are one of many dangers characters must deal with, including factional warfare between the surviving tribes, skirmishes over undiscovered future-tech caches and the unalterable moment of the same asteroid that wiped out the dinosaurs clearing the commuters off the board once and for all.

“I have a huge list of inspirational sources in the book,” said Germain, “Star Wars, because when I first saw the movie, I thought that tauntauns were fluffy dinosaurs and I was just over the moon. Shanna the She-Devil, for obvious reasons. Land of the Lost, Dinotopia, Jurassic Park, “A Sound of Thunder,” by Ray Bradbury, tons of paleoartists… the list is just huge. I feel lucky that there’s so much dinosaur information and inspiration out there!” 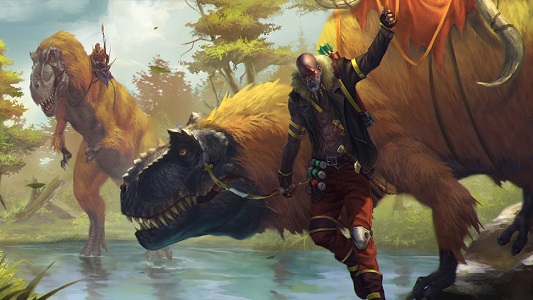 The dinosaur elements aren’t just there for scenery or as monsters the PCs kill for experience and treasure. The commuters learned how to domesticate dinosaurs, so each PC has a pet dino they can use as part of their story. To add to the fun, each player plays the dinosaur pet of one of the other players.

“Our Kickstarter backers and players seemed really excited about two things,” said Germain, “playing as a dinosaur and having a dinosaur at their side. We worked to satisfy both of these desires with the dinosaur companions. We made companions work like PCs, not NPCs, so they don’t just run around beside you and give you some kind of bonus. Instead, each companion has a unique personality and set of skills. So your T. Rex companion might have an amazing attack, but it’s also curious, so it’s always sticking its big nose in where it doesn’t belong.”

Predation is available in PDF and physical copies are on pre-order, though many of Monte Cook Games Kickstarter backers have already received the advanced PDF. If you love dinosaurs, be sure to check out this clever girl when it hits game store shelves this summer.

What is your favorite dinosaur? Let us know in the comments.


Rob Wieland is an author, game designer and professional nerd. He writes about kaiju, Jedi, gangsters, elves, Vulcans and sometimes all of them at the same time. His blog is here, his Twitter is here and his meat body can be found in scenic Milwaukee, WI.