Many games take the concept of Jenga and then reverse the process: Stack until it falls. It’s a gratifying concept because it has all of the tense drama of a wobbly tower on the precipice of destruction, yet you’re also building something and increasing visual appeal as the game progresses. Rhino Hero is perhaps the most popular design in this sub-genre, but there’s a new kid on the block. Beasts of Balance from publisher Sensible Object mixes a bit of analog weeble wobble with electronic world building.

World building, in a stacking game? Calm your quizzitive soul; I’m not pulling your leg. Let’s talk a little about what you’re doing externally before we get into what Beasts of Balance is doing internally. 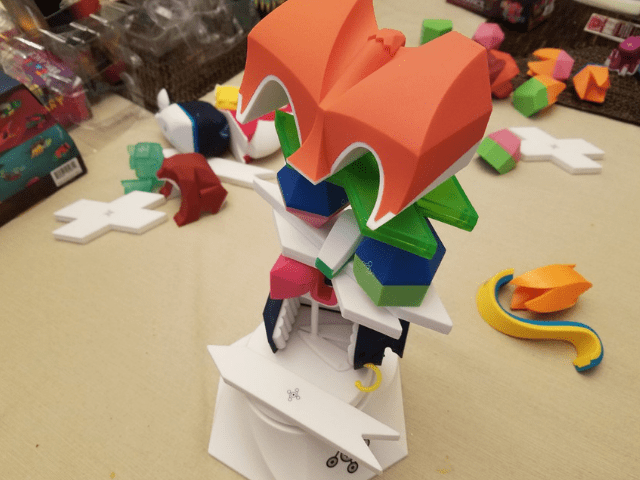 This is a cooperative family-weight game. Mechanically it’s light as can be – you grab one of the available plastic animal shaped polygons and place it on this sci-fi looking pedestal. The goal is simple yet esoteric: You clearly want to stack as much as possible and beat a previous high score, but there’s an entire additional layer.

Certain pieces aren’t animals but are dubbed artifacts. They’re things like a giant “X” or elemental crystal. Some of these cause existing animals to cross-breed, creating altogether new species, or perhaps migrate from land to water or water to air.

All of these exploratory elements are handled by an app. You’ll link your phone or tablet to the plinth (that sterile-looking platform) and it will reflect your actions of the physical world into those of the digital.

This concept will blow you away. The first time you mix an eagle and a warthog or a toucan and an octopus – it’s marvelous. That new dopey lop is fumbling around in their environment and it’s pumping up your score. You get a little notification saying you’ve discovered a new creature which you can review in your Pokedex-like inventory between sessions.

It’s a wild experience. You’re dealing with a simple stacking game with a streamlined yet solid mechanical base. Tension arrives when the creature totem topples. The volcano in the app thunders a countdown into your living room and ticks down until explosion. You’re rummaging around the table trying to restack your misshapen sculpture and the whole thing is about to go DEFCON 1. It’s marvelous.

Couple this with a more long-term goal of exploring the creature types and simply understanding the deeper mechanisms at play; the magic is apparent. The game doesn’t have a lengthy rulebook and simply tosses you into the prairie. This is one of the strongest aspects as you need to experiment and discover to feel it all out. It’s addictive and compelling. 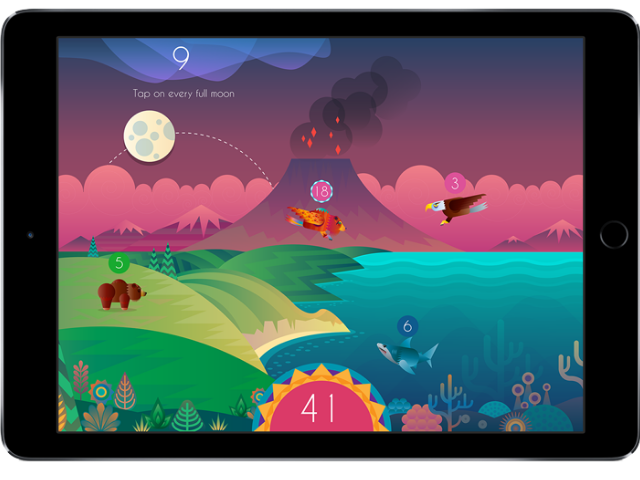 The issue is that all this fades somewhat rapidly. Since a new hybrid creature really isn’t mechanically different than the last 10 you’ve discovered, Beasts of Balance can find itself relegated to the shelf. It doesn’t quite have the staying power for extended or repeated play in rapid bursts.

Luckily, this is all about to change. Recently released was the new battle mode. This shifts the game towards a head-to-head confrontation where each player has their own topography to develop fauna. From a gameplay perspective, it brings a fresh take as you’re no longer attempting to stack everything cleanly. Instead of thinking ahead and attempting to maximize the number of pieces placed, you’re all the sudden putting the shark balanced just so, hoping the next player has no room to add to the growing mishmash of limbs and fin. There’s a devious element as you give in to offensive play and everything is ratcheted up a solid degree.

Arriving alongside this new mode is a slew of creatures. These additional figures will inject vigor into both styles of play as you discover new beasties and have to rethink your established stacking strategies.

Of particular note are the legendary creatures. These include special cards that dictate their own set of rules. For instance, in order to place Fancyprance the Fabulous Unicorn you must already have placed all of your colored element artifacts.

These legendary requirements are fantastic because they offer an additional set of short-term goals. They skew your strategy towards smaller incremental gains and have a noticeable effect on play. When it all comes together and you place that beautiful unicorn atop the heap, you’re rewarded with a shower of rainbows jettisoned from the mare’s behind. Yes, you read that correct: Fancyprance poops rainbows. 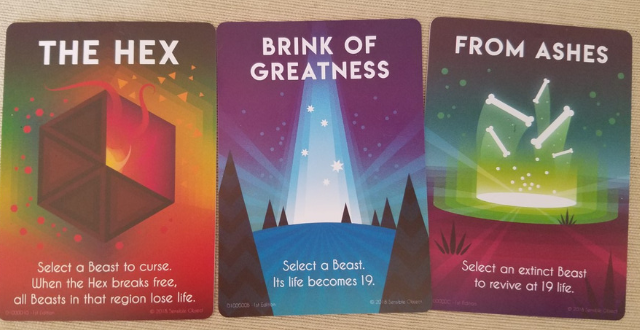 In addition to several figure expansions, a card pack supplements the battle mode. These optional ditties allow each player to draw a hand and interject special abilities and effects during play. While these are an interesting addition and change up the tempo, I’ve found the results somewhat mixed.

“Booby Trap” which allows you to rig a piece for sabotage is splendid, but “Smite” simply blows up an opponent’s animal and is clearly more beneficial. The effectiveness fluctuates and you have to be able to swallow that variability to make hay. Because of this, I find they provide a good taste-changer on occasion but aren’t something you will want to use every single play. The bread and butter of Beasts of Balance is still, thankfully, the beasts.

This is a wonderful game for adult and child alike. There’s just enough there to keep your mind focused and your hand steady. It has a promising future as it continues to evolve and sprout wily new limbs and curious tentacles. Beasts of Balance may not be the strongest design of the past couple of years, but it’s certainly one of the most inventive.

Have you played Beasts of Balance? Let us know in the comments!  And be sure to join host Becca Scott on  Game the Game every Thursday here on Geek & Sundry to watch the best boardgames played with fantastic guests!

Editor’s note: A sample of the game was provided by the publisher. This article isn’t sponsored, but previous coverage was done in partnership with Everything Epic.