It’s the time of year when epic summer blockbusters are coming at us fast and furiously, that while boasting bombastic effects and have ultimately safe premises that take us on a journey for 2 hours but tell us nothing about ourselves or show us nothing new. Every once in awhile, however, a movie comes out that is totally off the wall, and whose premises are as ridiculous as they are fun.

In Pitchstorm, published by Skybound Games, you get to experience the joys of pitching those kinds of movies. Off-the-wall, preposterous movies that are so silly they just might work. These are the movies whose charm lies in the fact that someone, somewhere, decided they were a good idea.

It’s a true party game that can accommodate 3-12 players, and driven by three kinds of cards: character, plot, and executive notes. The mechanics are simple enough, though the gameplay is slightly different depending on the number of players. For games on the smaller side, games are played as each player flying solo. In larger games, teams are built up as pairs. Check out Becca’s How to Play video for the details on how the game plays:

There’s fun to be had in taking tired tropes and breathing new life in them. A straightforward premise – a safe set of characters with a safe plot that builds a safe story that speaks to a tried-and-true audience, for example, might look something like this: 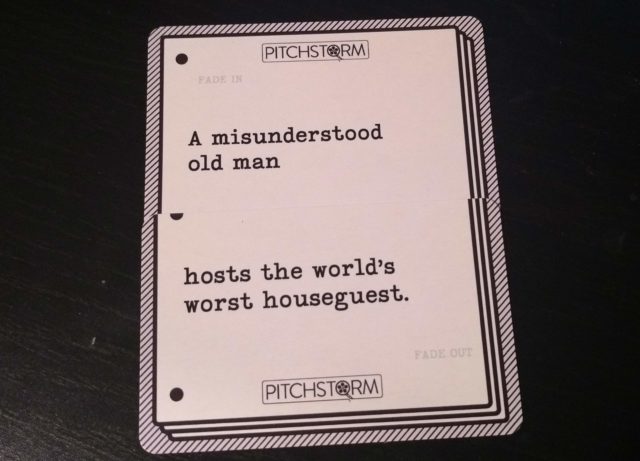 Those beats are familiar enough, for sure. But let’s admit it: they’re also somewhat boring, and something we’ve seen. It can be weaved into a funny, zany story, for sure, but let’s be honest: it’s been done. 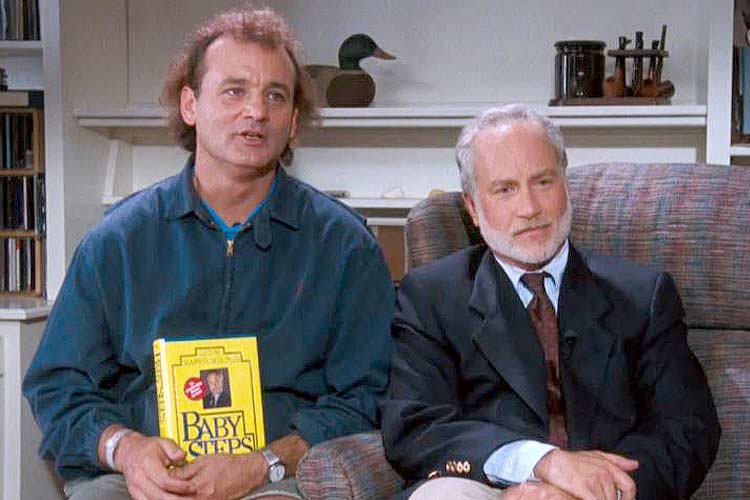 The magic of the game is often found with the executive notes. When the executive player starts hearing this kind of pitch, and one of the joys you get to experience is throwing crazy curveballs that force players to, in real-time, incorporate new twists. They’re forced to rise to the challenge and make a case for novelty and entertainment. Players get a laugh, get lauded for creative approaches by other players, and maybe even recognized with a win that round.

Maybe a quick-witted player might find a way to twist the pitch into something both more outrageous but also more familiar, finding a way to turn What about Bob?  into Star Wars: The Empire Strikes Back, focusing on a whiny Luke complaining about the water and the food (but thankfully not the sand). If you’re that player, well done. 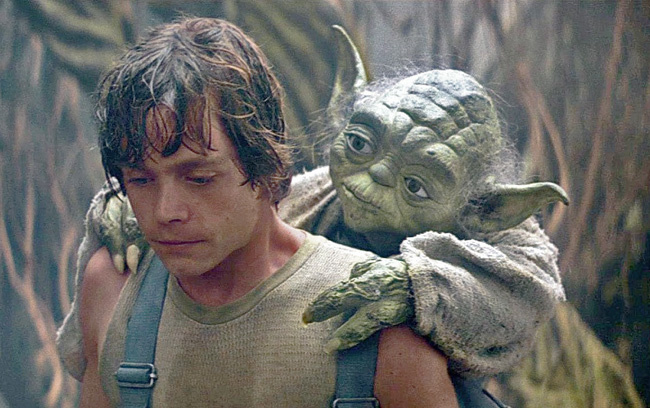 The real magic, however, comes with outrageous characters and incongruent plots, twisted into something even zanier with an executive note. Take, for example, this:

Stitching these concepts together is going to be a heck of a ride, and however it goes down, it’ll be an entertaining yarn to spin.

And that’s kind of the point of Pitchstorm. The game, while it does have conditions for scoring and winning, isn’t actually about that. What’s remarkable about this kind of party game is that it isn’t about showing how terrible a person you are, or how twisted a sense of humor you can have but rather how creative, funny, and witty you can be. You get a really strong sense of that when you watch Becca and her guests play it on Game the Game: everyone is having a great time, and the outcome doesn’t matter as much as much as watching everyone just embrace the curveballs and roll with the punches.

Playing this game is like experiencing an episode of Whose Line Is it Anyways? starring you and your friends – the points don’t matter, but you get lots of laughs along the way. It’s improvisational, and there’s something collaborative and creative about the experience that is made even better when played with 6+ players. You accept outrageous premises as reality, you serve the story, and your ultimate goal is to entertain those around you.

One of the best parts of light and accessible party games is that it gives people a structure and a reason to just be silly together. At the heart of a great game is a great play experience, with play being the operative word. Pitchstorm offers a great structure for playfulness, laughs, and judgment-free fun in the same way that zany, silly, off-the-wall movies are lighthearted fun.  And we’re all for that.

Pitchstorm is currently funding on Kickstarter, having quickly surpassed its goal of $5K. You can fund the project yourself and secure a copy for $25 by backing the project, though you only have until July 13th to get in on the Kickstarter.