Pete Walker and the Horror of the Older Generation - Nerdist

Pete Walker and the Horror of the Older Generation

Unless you’re a hardcore horror and sleaze fan there’s likely no reason you’d know the name of British director Pete Walker. He is an independent director-producer who worked predominantly in the ’60s and ’70s. While he started his career with softcore comedies like For Men Only and School for Sex, he eventually gained notoriety with a brief cycle of increasingly grisly and salacious proto-slasher movies. Most of them have copious nudity and blood to keep the teens happy. If we look deeper, we find a fascinating thread traveling through all of them. They tend to depict the mental collapse of the older generation, who feast (sometimes literally) on the permissive youth culture. 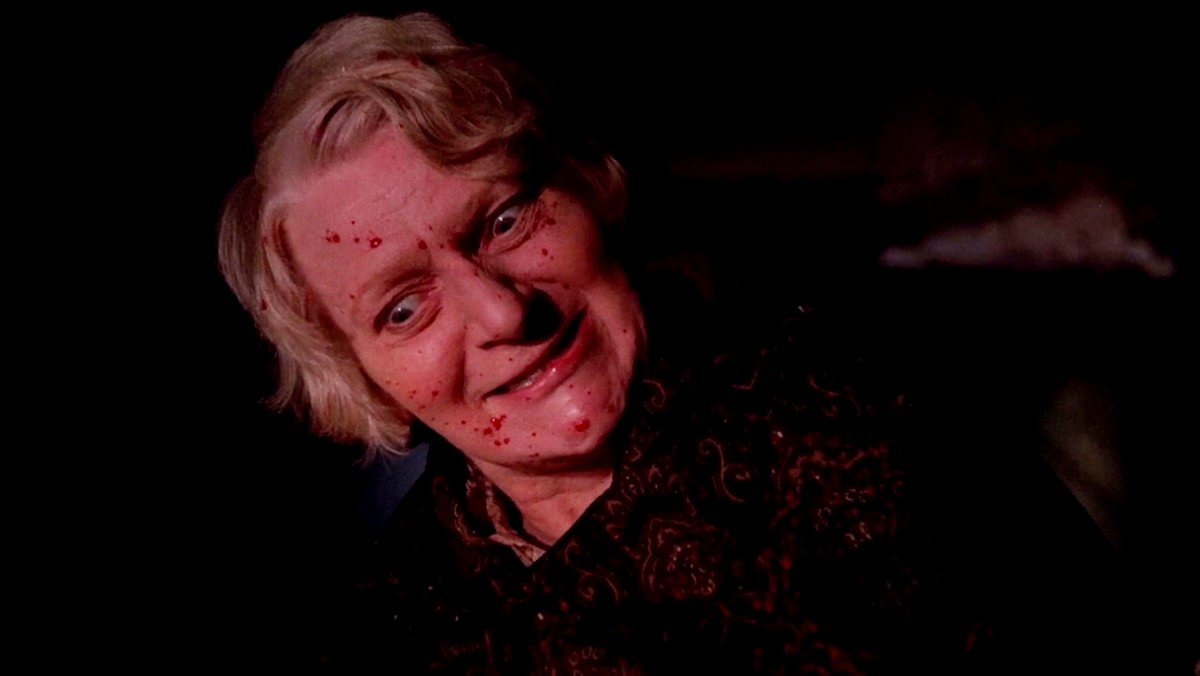 Scary old people are not a horror trope unique to Pete Walker, surely. The notion of an elderly person committing murders or using black magic has been around for hundreds of years. But it isn’t merely that the sadistic villains of Walker’s movies are olds. It’s that they represent a generation unwilling to give up control. They cannot allow their ways and values to be “corrupted” by a sex-crazed, dope-smoking youth. We see this kind of thing nowadays with octogenarian politicians clinging to their elected power like insects trapped in tree sap. They can claim to worry about moral deterioration, but it’s really just fear that they’ve become obsolete.

In order to discuss these movies properly, I’m going to get into some plot spoilers. If you’d like to watch any of these movies, the entire Pete Walker collection is currently streaming on the Arrow Video app.

The Flesh and Blood Show

The first of Walker’s “golden” period is 1972’s The Flesh and Blood Show. It follows a group of young theater actors as they head to a seaside theater in the offseason to mount an improvised play. They don’t know who hired them, just that it’s a wealthy producer. They end up staying in the theater while they rehearse, and amid sexual trysts and jealousy, and some fairly upsetting pranks, someone begins picking off the actors one by one.

About halfway through the film, the gang go to a cafe for breakfast and see an older gentleman who says his name is Major Bell (Patrick Barr). He says he’s a big fan of theatre, even did some acting in the army, and asks to come by to watch rehearsal. Eventually, we and the actors learn he’s actually Sir Arnold Gates, an actor who disappeared 15 years prior after allegedly killing his wife and her lover, both actors in his production of Othello. During a prolonged flashback, we see Gates tie the pair up and board them up under the stage, the corpses of whom one of the actors found previously. 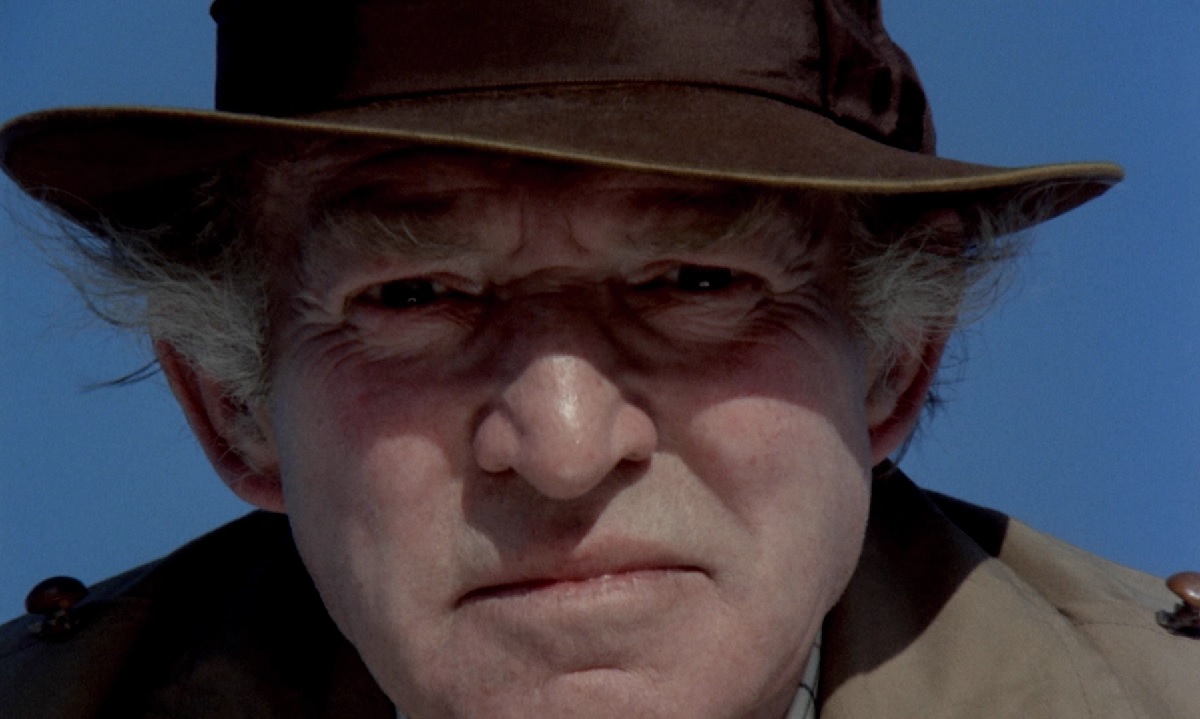 Walker followed The Flesh and Blood Show with 1974’s House of Whipcord, which places the perceived lack of morality of young women right at the forefront. Our heroine is Ann-Marie (Penny Irving), a French model who meets a young man at a party and begins a surprisingly chaste romance. The young man, who says his name is Mark E. Desade (Robert Tayman), asks Ann-Marie to accompany him to the country to meet his parents. This is technically what he does. His mother Mrs. Wakehurst (Barbara Markham) has taken over an old prison and now abducts, imprisons, and tortures young women who she believes skirted proper punishment for their lewd and immoral behavior.

A recent nude photoshoot where the producers didn’t get a permit results in Ann-Marie’s arrest for indecent exposure. Though the courts only made her pay a 10 pound fine, Wakehurst believes she got off light. Adding to the utter charade of this horrible place, Wakehurst’s elderly, now-blind lover, a judge (Patrick Barr again), presides over the girls and passes judgment. Little does he know, however, that Wakehurst has no intention of “rehabilitating” any of them. Instead she tortures, terrorizes, and eventually hangs them for even the most minor of infractions. 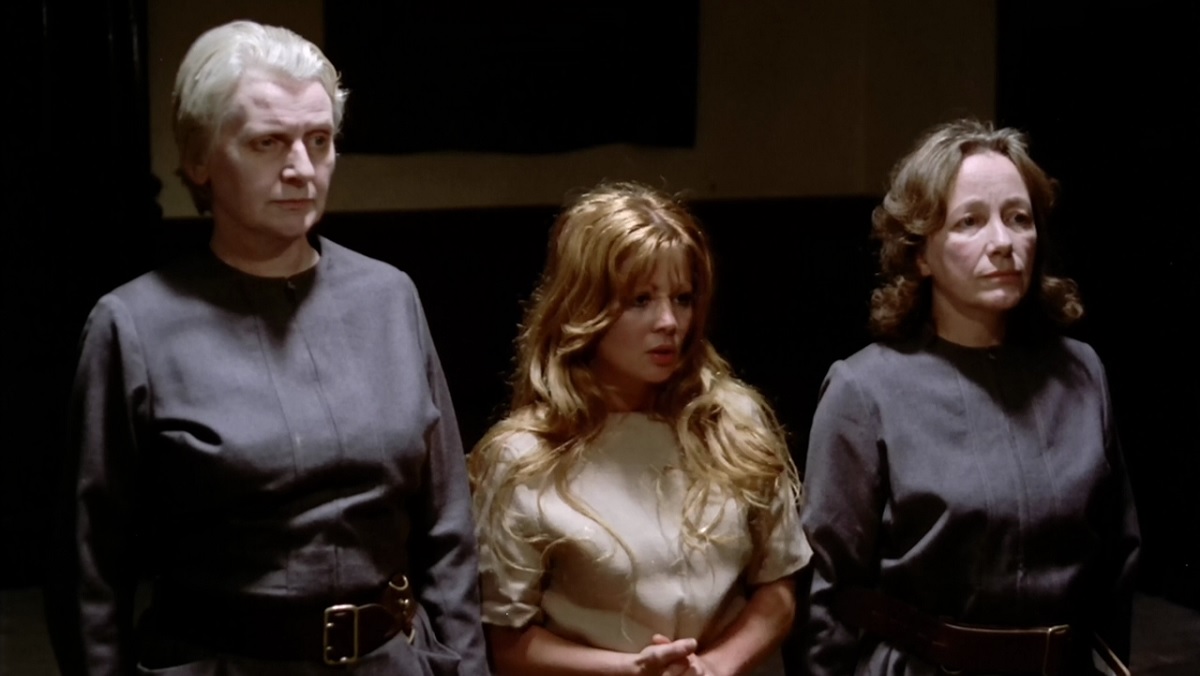 While whipping nubile young women is a case of exploitation cinema at its most obvious, Walker clearly wanted to add subtext and a deeper sense of irony. He opened House of Whipcord with the tongue-in-cheek text “This film is dedicated to those who are disturbed by today’s lax moral codes and who eagerly await the return of corporal and capital punishment.” And, like all of his villains, Mrs. Wakehurst is a hypocrite. She was fired from her previous job as matron of a girl’s reform school for abuse, but she herself had an affair with the judge who sentenced her years ago and he left his family. Wakehurst’s moral superiority and status gives her, she thinks, the right to do these horrendous deeds.

This level of hypocrisy and puritanism run amok continues in Walker’s 1976 movie House of Mortal Sin. Another infuriating experience, like Whipcord, this movie highlights the power imbalance between “respectable” members of the older generation and the perceived frivolousness of youth. It also portrays gaslighting at its most insidious and the dismissing of young women’s concerns at its most upsetting.

Jenny (Susan Penhaligon) is a young woman who goes into a church confessional hoping the priest on the other side is a friend of hers named Father Cutler (Norman Eshley). It’s not, however; it’s an older priest named Father Meldrum (Anthony Sharp) who pressures Jenny into confessing what’s troubling her. She’s having issues with her boyfriend, who’s a bit of a cad, and who convinced her to have an abortion recently. Though Jenny leaves quickly, Meldrum becomes fixated on her and begins to stalk and kill any men he believes have hurt and corrupted her.

This is, of course, boils down to Meldrum’s own repressed sexuality. A thread in the film talks about how archaic the practice of priest celibacy is, reflected in Father Cutler’s attraction and eventual clandestine relationship with Jenny’s older sister Vanessa (Stephanie Beacham). Meldrum is, in his way, the flipside of Mrs. Wakehurst, wholly obsessed with young women. But whereas Wakehurst punishes the girls for their indiscretions, Meldrum aims to protect the girl’s purity, which he believes others in her life are corrupting. 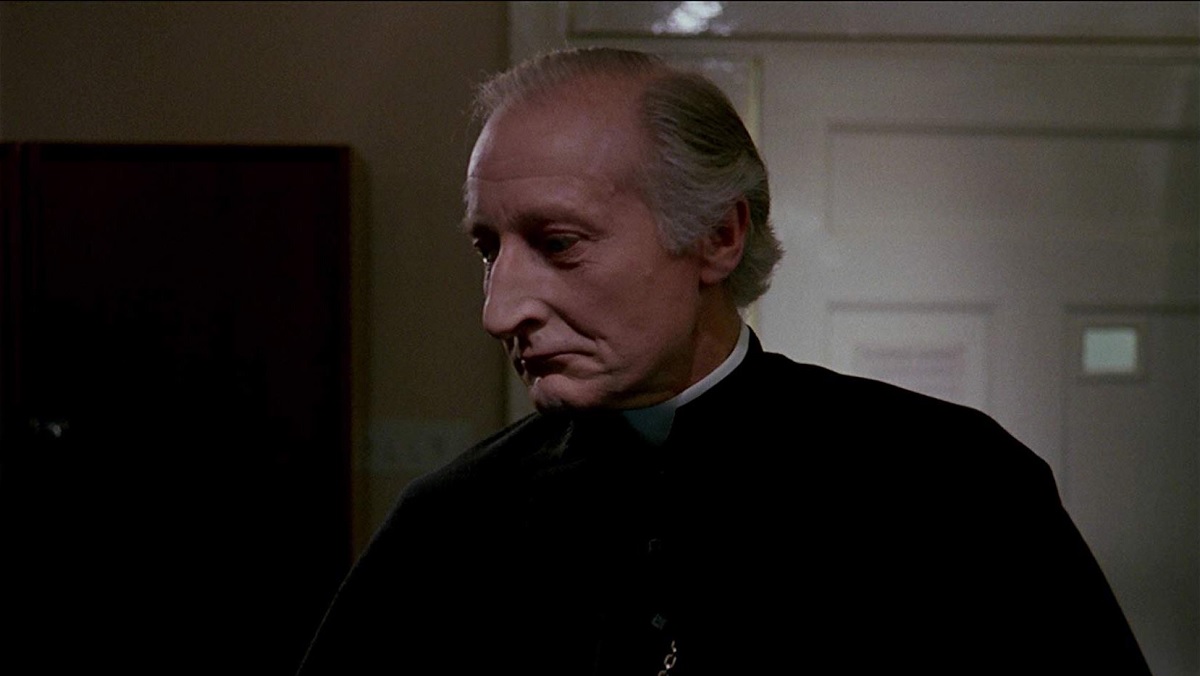 Jenny tries to tell any and all authorities about Father Meldrum, but nobody believes her. She’s just a naive and confused young woman, after all, and this is a respected man of the cloth. He’s doing all of this for her own good, and soon she’ll learn gratitude. In the movie’s most shocking finale, Father Cutler discovers the truth, and even catches Meldrum red-handed after murdering Vanessa. But rather than turn him in, he allows Meldrum to get away with it, to save the Church from the indignity of a scandal. It’s so enraging because you know things like this really have happened, and continue to happen. Walker just put it in the middle of a horror movie.

In between his two House of… movies, Walker made what is probably his most well known and for my money best movie. 1974’s Frightmare stars Sheila Keith, Walker’s most frequent and iconic actor. Keith appeared as a stern prison warden in Whipcord and an ominous housekeeper in Mortal Sin. She had a very particular look, incredibly conducive to striking fear. In Frightmare, she plays Dorothy, a woman recently released from a mental asylum, believed cured. Her husband Edmund (Rupert Davies) was also in the asylum, though it seems he only had himself committed to stay close to his wife.

The pair have a 15 year old daughter named Debbie (Kim Butcher) who was in an orphanage until recently. As far as she knows, her parents died. Now that she’s out of the orphanage, Debbie takes up with a biker gang and gets into increasingly violent skirmishes. This is, obviously, to the chagrin of her older half-sister Jackie (Deborah Fairfax), who has taken her in. Jackie is Edmund’s daughter from a previous marriage and a new man she’s dating, Graham (Paul Greenwood), is a psychiatrist who believes he can help Debbie. If only Jackie would tell him her family history. 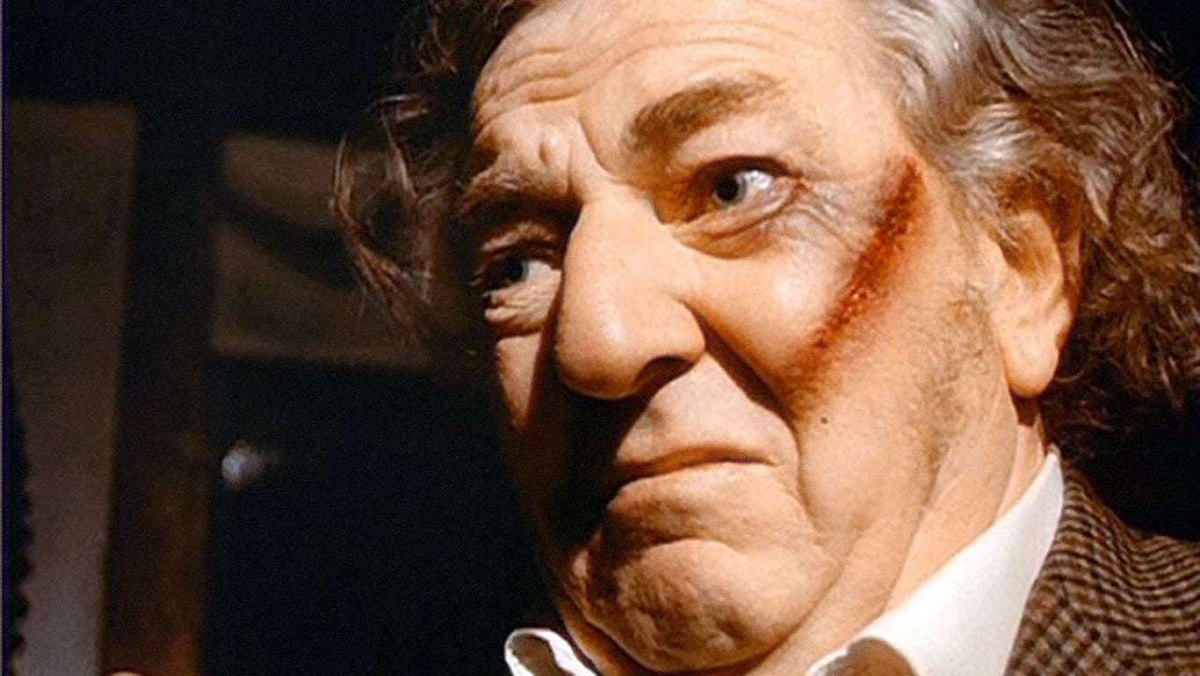 As the movie goes on, we find out that the real history is Dorothy is a murderer and cannibal who used her ability to read tarot cards to lure younger people into their country home to kill and eat them. Pretty gruesome stuff. And despite the authorities believing both she and Edmund are cured, it doesn’t take long for Dorothy to go back to her flesh-drilling ways. Once the already sociopathic Debbie learns her parents are alive, it’s a real homecoming worthy of that chainsaw family in Texas.

In Pete Walker’s films, as we’ve seen, it’s the older generations destroying the younger. These movies spoke to the young people of the time, who were obviously the target audience. As a countercultural reaction to the death of the ’60s, Walker shows in graphic detail the resurgence of conservative, buttoned-up, puritanical WWII generation who are not prepared to go quietly into that good night. When young people are evil murderers in his films, it’s always because they are related to the older killers.

In The Flesh and Blood Show, the young heroine turns out to be the murderous actor’s traumatized daughter; Mark E. Desade in House of Whipcord is the result of the affair between Mrs. Wakehurst and the judge. Debbie is a psychopath in Frightmare, but only because she’s Dorothy’s kid. He flips this around in his 1976 movie Schizo in which the heroine believes the old man who went to prison for killing her mother is after her when really he exists as one of her personalities. But in 1978’s The Comeback, Walker makes Keith the murderer again, this time getting revenge for her child’s death. 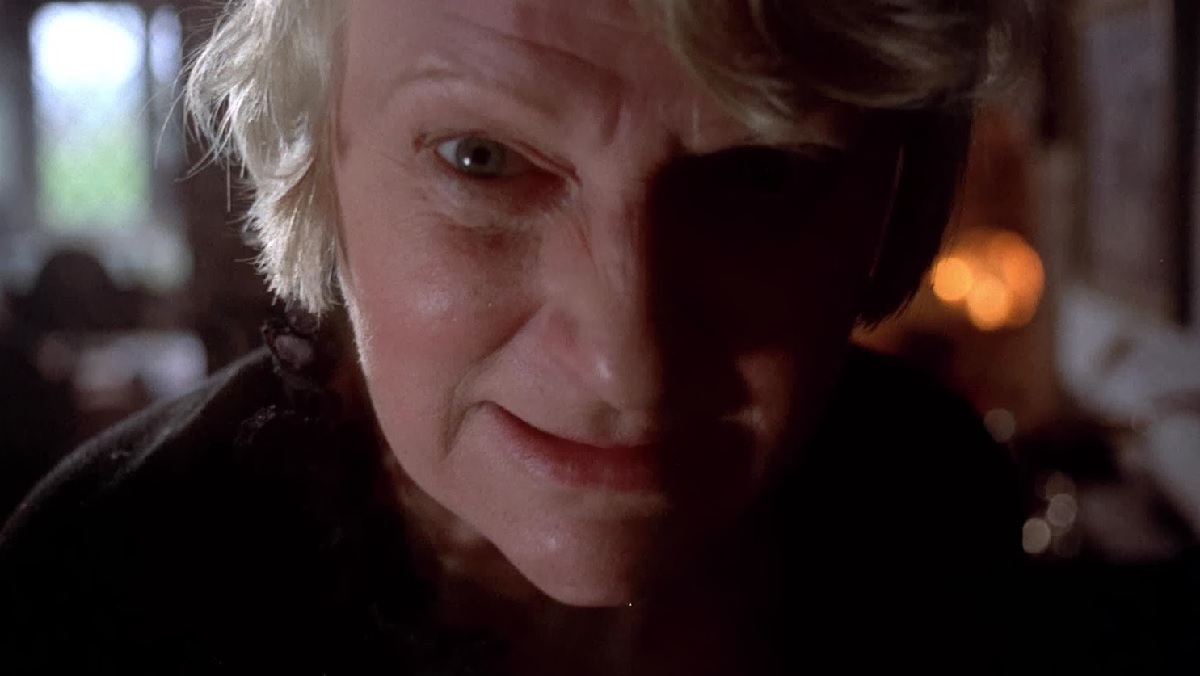 In Pete Walker’s cinema, the corrupting influence is not drug-taking and free love, it’s always the repressed parental or grand-parental figures who find that activity repulsive. As an independent exploitation filmmaker, he knew he had to put blood and flesh on the screen, but in each case, he does so with a great deal of political and social satire. The elderly generations, he warns, tongue in cheek, would rather kill us all than admit they’re past their prime.