Everyone loves a good food combination: spaghetti and meatballs, grilled cheese and tomato soup, cake and ice cream. But, there’s no duo quite like peanut butter and jelly. The way they combine their salty and sweet powers between two slices of bread is truly iconic. The rest of the world doesn’t get the hype over PB&J sandwiches, but those of us in the United States know it’s a classic.

It’s the sandwich that became an after-school snack staple for generations of latchkey kids. It can be a simple quick bite or a gourmet meal with a few twists to tickle your taste buds. A peanut butter and jelly sandwich is good at any time of the day and always hits the hunger spot. It makes you wonder how peanut butter and jelly became a pair and why combining those items in a sandwich is so prominent in our culture.

The Invention of the PB&J Sandwich 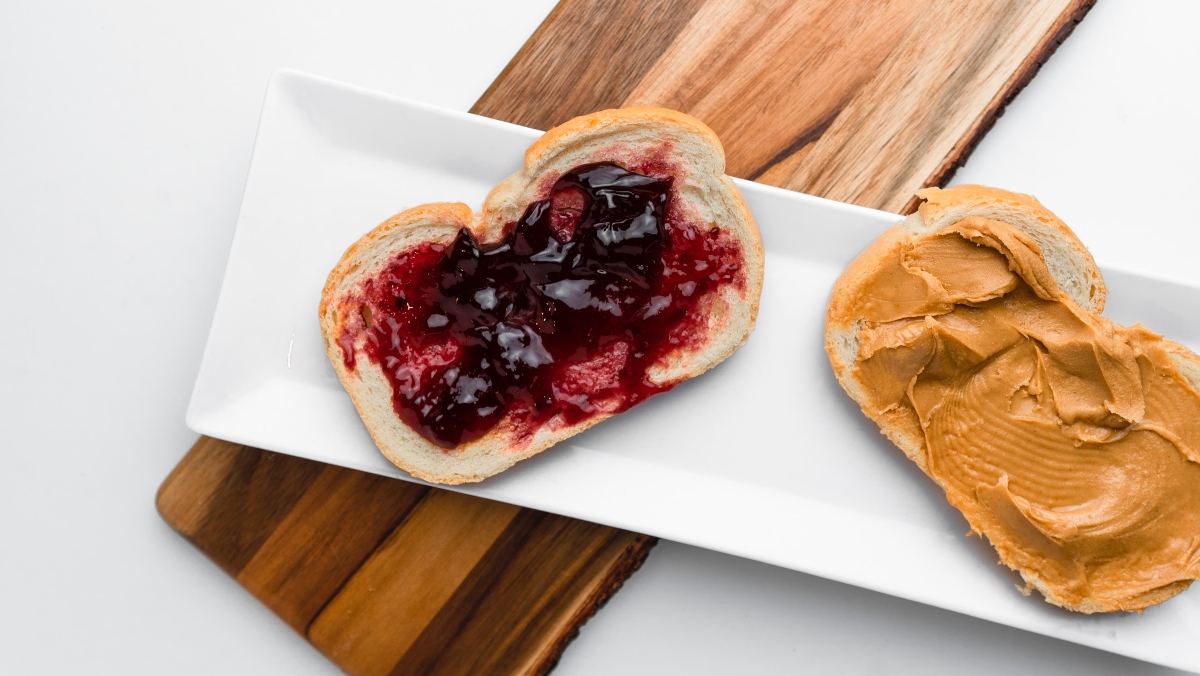 Of course, peanut butter and jelly have their own separate origin stories. There are documented recipes on how to preserve fruits dating back to around the 4th century along with evidence of the Aztecs consuming mashed roasted peanuts.

In 1884, Marcellus Edson obtained a patent to produce a butter/lard-like substance from roasted peanuts using heat. Ten years (and many refinements) later, peanut butter began to be sold as a pasty and sticky snack food. Like many new foods that haven’t reached mass production levels, peanut butter was expensive and therefore a treat reserved for the wealthy. Chemist Joseph Rosefield took things a creamier step forward in 1922 with a process for making smooth peanut butter. Rosefield used partially hydrogenated oil to keep the oil from separating from the blended peanuts.

Marmalades and sugary treats have been around for centuries; however, jelly specifically came later because its original setting agent, gelatin, was incredibly hard to make and access. (Jelly is now made with pectin, a fruit fiber.) It wasn’t until French scientist Denis Papin’s invention of powdered gelatin in 1682 that jelly was able to be made in quick, large batches. Interestingly, the word jelly comes from the French word gelée, meaning to congeal or gel.

In 1897, Jerome Smucker (you surely know that name) made an apple jelly in Ohio. However, Welch’s later came in to become quite popular with its Grapelade jelly. Both brands still reign supreme as top-tier jelly producers.

Similar to most foods, it is hard to pinpoint exactly who came up with the concept of the peanut butter and jelly sandwich. Peanut butter was originally paired with savory foods and pre-sliced bread itself didn’t become a thing until 1928.

A 1901 Boston Cooking School Magazine recipe is our best documentation of what resembles the modern-day sandwich. The recipe called for three layers of bread with peanut butter and jelly in between the slices. The sandwich soon began to catch on as peanut butter became cheaper and more widely available thanks to brands like Peter Pan (1920) and Skippy (1932) mass producing the product. Some moms began sticking a PB&J in their kids’ lunch boxes or having one ready for them after school.

Fast forward a few years to World War II in the late 1930s through mid-1940s. Peanut butter and jelly sandwiches played a major role in feeding US soldiers. The men would ask for Grapelade jelly, peanut butter, and sliced bread in their rations to make sandwiches. Honestly, when you think about it, it makes a lot of sense. All three items have a long shelf life that doesn’t require refrigeration; they also make for a filling and somewhat nutritious meal. And, perhaps some of the younger guys may have enjoyed PB&J sandwiches during their childhood.

Either way, the popularity of peanut butter and jelly sandwiches rose following the war. The 1940s and 1950s brought a wave of print ads in honor of the combo. There’s a 1945 ad from none other than Heinz (yes, the ketchup folks) selling apple and peanut butter alongside jelly for a kids’ snack and a ladies’ luncheon. 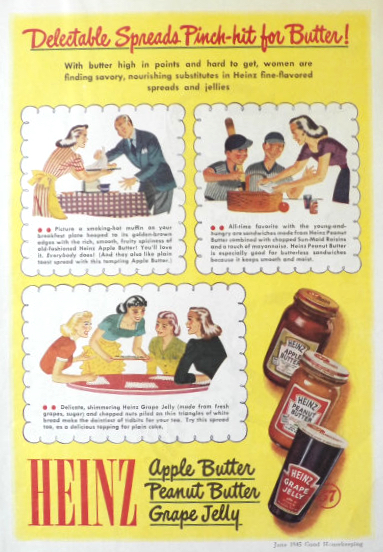 A witchy Ann Page ad from Life Magazine in 1951 brought the pair together with some other interesting food choices. Of course, those ads did not include any racial diversity, primarily targeting white women and children. This advertising spread to televisions became commonplace in American homes over the next couple of decades.

Many of these ads focused on either peanut butter or jelly depending on the specific brand, like this 1950s Peter Pan commercial.

Advertising peanut butter and jelly, both separately and as a unit, isn’t quite as big as it was before. There’s a lot of food competition out there in general. Now, it’s all about seeing YouTube videos of artists making the sandwiches super fancy.

Peanut butter and jelly sandwiches’ place in everyday life certainly extends to pop culture and art too. There are countless references to the famous food duo over the course of many years. For example, The Andy Griffith Show (a quintessential 1960s sitcom) Barney teaches Opie and his friends a lesson about how breaking the law will lead to being in jail with no more PB&J sandwiches.

American Horror Story: 1984’s “True Killers” episode shows a camp chef attempting to quell a former employee (and convicted killer) by offering him his favorite sandwich: a PB&J. Netflix’s House of Cards reveals that Frank Underwood is inept at making a PB&J sammy among his many other undesirable traits. A 2006 short film, Peanut Butter and Jelly, shows a protagonist complaining about her comrade’s sandwich making skills; they end up making one together and that’s pretty much the premise.

And, there’s the inexplicable popularity of the Buckwheat Boyz song “Peanut Butter Jelly Time,” which hit in 2004. The song became an Internet meme (with a banana mascot) and fodder for animated sitcoms like Family Guy. PB&J sandwiches even became the random source of ire after Jimmy Kimmel’s mom made a batch of sandwiches for the Emmys. Apparently, some people did not find the Stranger Things cast passing them out to people amusing at all.

The Evolution and Education of PB&J

Peanut butter and jelly is a combination that continues to evolve. There are countless new variations of the classic, including swapping basic bread for more gourmet options, grilling it, turning it into French toast, and adding everything from actual fruit to potato chips.

Smuckers continues to be a leader in the PB&J space with Goober, a combination of both spreads in the same jar, and Uncrustables, a frozen Hot Pocket of the sandwich. The peanut butter and jelly love extends past the sandwich with cookies, milkshakes, donuts, ice cream sandwiches, and more. The duo inspires hair coloring techniques with swirls of berry and brown colors. And Los Angeles restaurant, PBJ LA, only serves the infamous sandwich with a variety of flavors.

In fact, PB&J is so ingrained and understood in our culture, it is being used to explain higher concepts. A New York Times video about implicit bias, a speaker uses the popular duo to explain how bias and a certain group of people becomes unconsciously linked together in our brains.

A blog post about user testing relies heavily on the peanut butter and jelly sandwich to learn how to find the right users and test participants for a project. Basically, PB&J sandwiches are more than just a snack; they are a framework for larger concepts because they are a part of so many experiences despite age, race, or any socioeconomic barriers.