OVERVIEW: Get Your Jurassic Park Fix with the Dinosaur Island Board Game - Nerdist

OVERVIEW: Get Your Jurassic Park Fix with the Dinosaur Island Board Game

Children are correct: dinosaurs are really freaking cool. When I was a little kid I dreamed of being some sort of archae-paleontologist (ala Indiana Jones crossed with Dr. Alan Grant) on a crazy quest to discover treasure and dinosaur bones in exotic locations. I lived, breathed, and dreamed dinosaurs. When Jurassic Park first came out I adored it and to this day I still have a soft spot for any kind of dinosaurs. Years of dino-laden enthusiasm ensured I would be totally hooked the moment when I first laid eyes on the bombastic 90’s style cover of Pandasaurus Games’s Dinosaur Island. 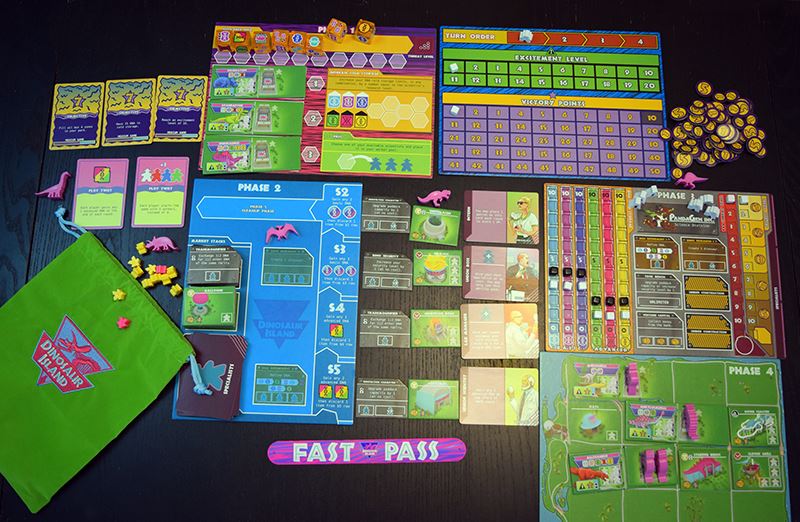 Here we have a worker placement game that lets you run your own Dinosaur theme park. You have control over everything from the attractions, rides, security, and even creating the dinos themselves! You could have slapped me with a speeding ticket for how fast I backed the Kickstarter for the first printing of the game, but instead Pandasaurus Games provides a slap bracelet as the first player marker for all your slapping needs (yes, this game is taking us back to the 1980’s and I love it!).

Dinosaur Island is a huge game. The first time I unpacked it, I marveled over the multitude of boards, dino meeples, cards, bits, coins, etc… Weighing in at over 6 lbs, Dinosaur Island is a lot to take in and I worried that perhaps I had invested in an overly-complicated game. Thankfully, while Dinosaur Island has a lot going on under the hood, the game breaks everything down into bite-sized pieces that makes it easy to dive into. 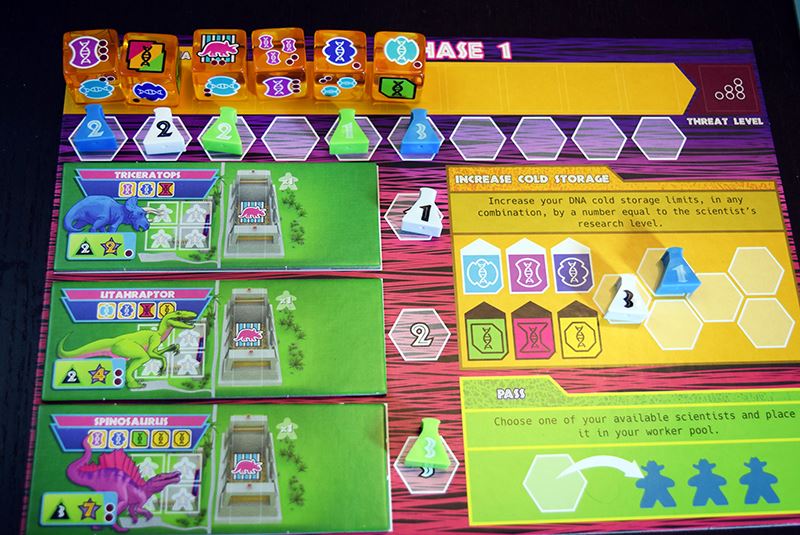 The game plays out in 5 phases that almost feel like mini-games in themselves. Each phase has its own board and requires you to make a few simple decisions. The research phase is first, (because you need to do your homework before you go mixing any old DNA together to make a Tyrannosaurus, duh) and during this phase you’ll do stuff like assign your scientists to do research, buy dinosaur recipes, and make room in your cold storage for more of that precious, precious  DNA.

Next,you’ll head to the Market phase to procure a few of the park’s necessities like employees, attractions, and upgrades to your lab. Here’s when you get to really customize your park. Will you invest in exciting rides like the Hyper Coaster or make sure your guests are happily fed by food stands like the Clever Grill? You can also buy plenty of paddocks for your soon to be spliced-together dinosaurs to frolic in. 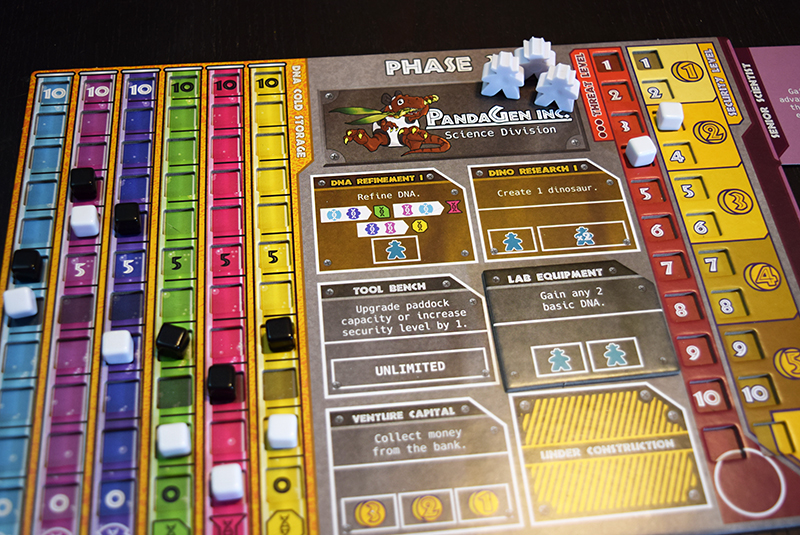 Following up our shopping spree is the Worker phase, which might just be the most important phase. Here is where your employees will set about combining DNA and mixing up recipes to produce dinosaurs. Building the biggest and most exciting dinosaurs, like the T-Rex, will have people clamoring to get into your park, but it also comes with a safety risk as well. As Jurassic Park proved, keeping giant, meat-eating prehistoric lizards out of trouble is harder than it looks, so another important job your workers can do is improve your safety level. If the threat level of your dinosaurs is larger than your security level by the time the doors open and the guests arrive, someone is going to get eaten. Dead park guests don’t get you points (only lawsuits). 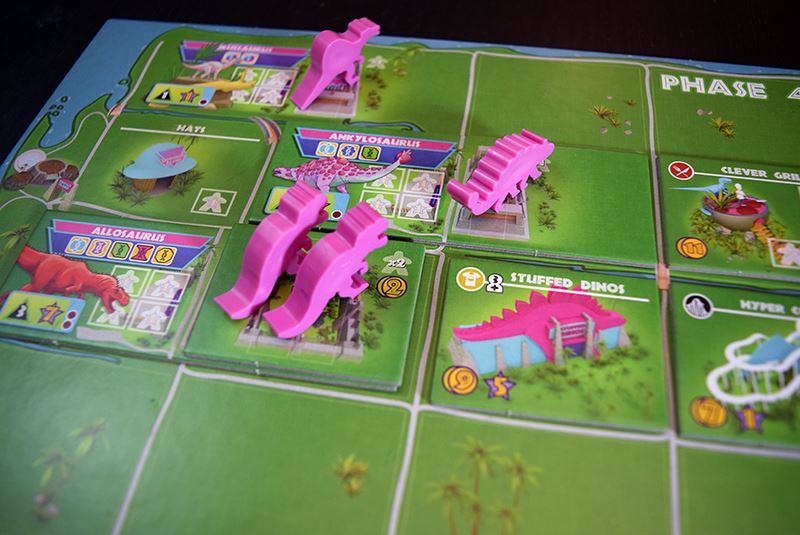 So with your park decorated and full of hungry, hungry dinosaurs it’s time to let people in and rake in the cash. In the Park phase patrons will show up to enjoy the thrills (and possibly be devoured) and it is up to you to make sure there is room for everyone. All the patrons that survive entering the park will net you points towards your victory at the end of the game. 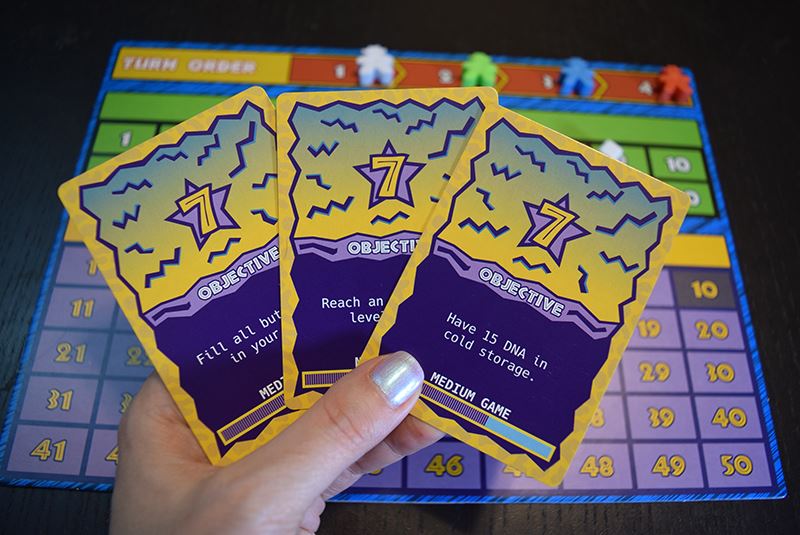 At the start of Dinosaur Island, you’ll deal out a set of objectives that can be claimed by the first person to fulfill them. The end of the game is triggered once there is only one objective left, so you may want to craft your strategy to make sure you beat your opponents in finishing them. These objectives come in a variety of flavors and the mixture of cards makes each game of Dinosaur Island feel unique every time you play.

Gameplay aside, the quality and look of the game is also top notch. Kwanchai Moriya’s art perfectly encompasses Dinosaur Island’s neon-splashed 80’s vibe! I love that the player boards are double thick with cutouts to keep your DNA cubes in place (otherwise DNA would be sliding all over the place making dino-mutants left, right, and center) and, to top it all off, the plastic dinomeeples are hands-down some of my most favorite meeples ever! 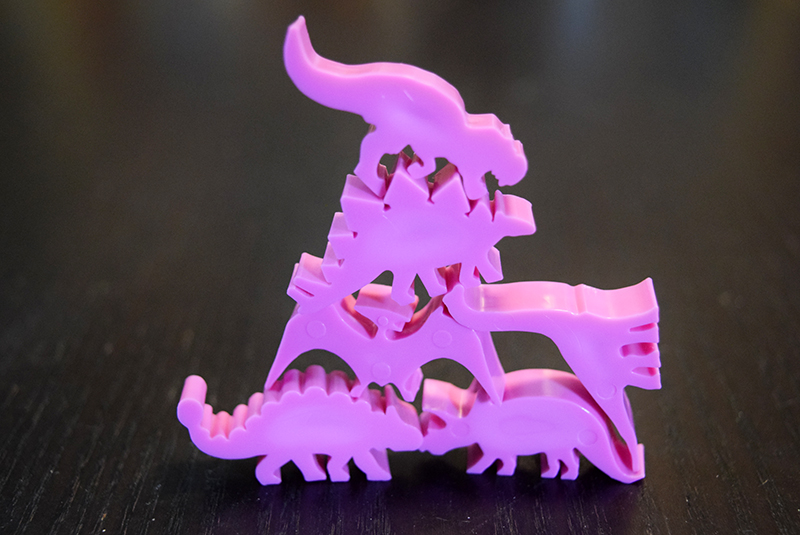 Just like an Argentinosaurus (one of the biggest dinosaurs ever discovered), Dinosaur Island is huge and intimidating at first glance, but the designers, Jonathan Gilmour and Brian Lewis have excelled at making a cohesive and well flowing game that I keep going back to play again and again. Dinosaur Island truly captures the spirit of Jurassic Park and provides deeply strategic gameplay while maintaining a level of accessibility in the way it separates out the different types of choices you have to make. It has easily stomped its way onto my top ten games to playlist and I don’t see it moving scaly butt any time soon.

What are some of your favorite dinosaur games? Let us know in the comments below!