Let's Talk About That Boat Scene in ONCE UPON A TIME... IN HOLLYWOOD - Nerdist

Warning: This post contains spoilers for Quentin Tarantino’s Once Upon a Time… in Hollywood.

There’s a moment near the midway point of Quentin Tarantino’s Once Upon A Time… in Hollywood when we catch Cliff Booth (Brad Pitt) in the throes of a memory. The stuntman is meditating on his encroaching irrelevancy, as his on-set demand withers away and even his famous best friend Rick Dalton (Leonardo DiCaprio) can’t save his career. Instead, Cliff’s been reduced to something like a glorified handyman, fixing Rick’s rooftop television antenna as he sips a beer and thinks back on what might have gone wrong. He recalls a time on the set of The Green Hornet where he got in an altercation with Bruce Lee (Mike Moh), and when we learn a vital bit of information: Cliff is disliked by many in the business because he allegedly murdered his wife. We even flash to a memory-within-a-memory, where we see Cliff’s wife (Rebecca Gayheart) arguing with him on a boat as he holds a spear gun. The moment cuts away before anything definitive takes place, but the implication is there. Cliff is a man with a violent past–or is he?

The scene is arguably the most vital in Once Upon a Time… in Hollywood because it serves as a Rorschach Test for the audience–your take informs all that comes next. If you take the memory at face value, then Cliff is an amoral, horrible person; a man skirting by on male privilege and rotten good luck. The moment also recalls the real-life death of actress Natalie Wood, who died on a boat, possibly at the hands of her husband Robert Wagner–a theory that’s still heavily debated, by fans and police. The allusion feels purposeful; as we continue to debate Wagner’s guilt or innocence, we also ruminate on Cliff’s alleged crime. Suspicion is muddied with lack of evidence or proof. We imprint our own biases on an event impossible to understand.

It’s just as likely, then, that Cliff Booth is innocent. Tarantino purposely cuts away before we witness an actual murder, and Cliff is otherwise presented as humble and kind; he cares deeply for his friend Rick, he tends lovingly to his dog Brandy, and he refuses to sleep with an underage Manson girl. If he’s innocent–his guilt presupposed by those who care little for his arrogance and onset sloppiness–then he’s a figure of tragedy, someone needlessly shunned to the sidelines, whose career unfairly dissolves in the wake of controversy. 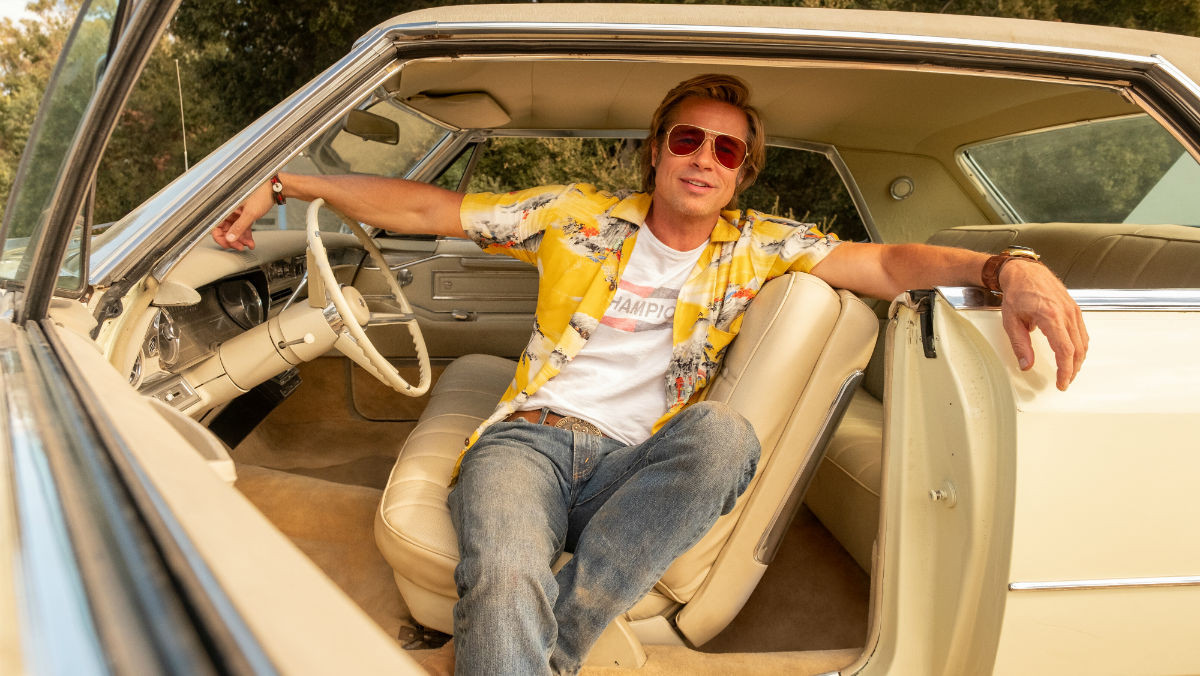 These opposing takes come to the surface in the film’s final act, when real-life curdles into Tarantino’s penchant for revisionism. After a brief stint in Italy–where Cliff did stunts for Rick in a series of Spaghetti Westerns–the two men return home. Rick’s picked up an actress wife in Italy and has decided to part ways with Cliff professionally, but not before a blowout drunken evening on the town. The two get blitzed at a Mexican restaurant and head back to Rick’s place, where Cliff smokes an acid-dipped cigarette he bought from a hippie. As the night unravels into drunken, trippy disarray, a chance encounter alters the course of history. Rick accidentally intercepts the Manson Family as they head next door to murder Rick’s neighbor, actress Sharon Tate (Margot Robbie). Instead, the Family infiltrates his house, where they come face-to-face with a very high and very disaffected Cliff, who brutally slaughters all three–with the help of Rick and a well-placed flamethrower–effectively “saving” Tate and her houseguests, and restoring his self-worth.

Depending on how you view Cliff, the ending will hold different values. If he’s a wife-killing madman, then the events are a despicable, self-serving revenge fantasy that cheapen Tate’s survival by implying her chance at life hinges on Cliff’s bravado. If he’s innocent, then the killings are a gratifying moment of restorative heroism. Either read is accurate, and both feel purposeful. It’s Tarantino presenting a litmus test for morality. The lens through which you see the world fills in the blanks, and alters the movie at hand. Is Once Upon a Time… in Hollywood a touching fable about reclaiming relevance, or a horror story about a business that forgives heinous acts the second righteousness is procured?

Maybe it’s both things. Is Tarantino reasoning with his own fractured persona, presenting his career and real life in a petri dish for the audience to assess? Perhaps he’s Rick Dalton, implicit in the bad behavior of dangerous men like Harvey Weinstein, whom he worked with for most of his career, admittedly ignoring his crimes against women in his own mode of self-preservation. Or maybe he’s Cliff Booth, putting women in danger to feed his own perfectionism, evading any real consequence in his pursuit.

Either way, the boat scene feels like a calling card to the audience; it asks us to bring our perception to the foreground as we examine and meditate on what Once Upon a Time… in Hollywood has to say. About art, about forgiveness, about peace of mind, about violence–and how we participate in and consume it, ravenous with the intention to forgive or annihilate.

TAGGED: Brad Pitt, Quentin Tarantino, Once Upon a Time in Hollywood