Sneakers based on video game characters—Pac Man, Mario, Pokémon, and more—has become surprisingly commonplace, but ones inspired by gaming systems are considerably less frequent. A collection of images that popped up online indicates that before the end of summer 2019, Nike has plans to release an Air Max 97 design that closely resembles the colors of the Nintendo 64, commemorating the company’s 1996 home console.

Featuring the sneaker’s trademark leather stripes in metallic grey, red, blue, and green with tongues labeled “POWER” and “RESET” and a shoe-length air pocket in yellow, the Air Max 97 has been designed to maximize its point of inspiration, down to a modified ESRB logo on the insole. Even the “AIR MAX” on the back of each shoe is printed in the same font as the classic Nintendo insignia. That said, however, there’s no official indication yet of a formal partnership with Nintendo, and the company has historically been litigious about fan- and sometimes even company-inspired spin-offs of their characters and products. 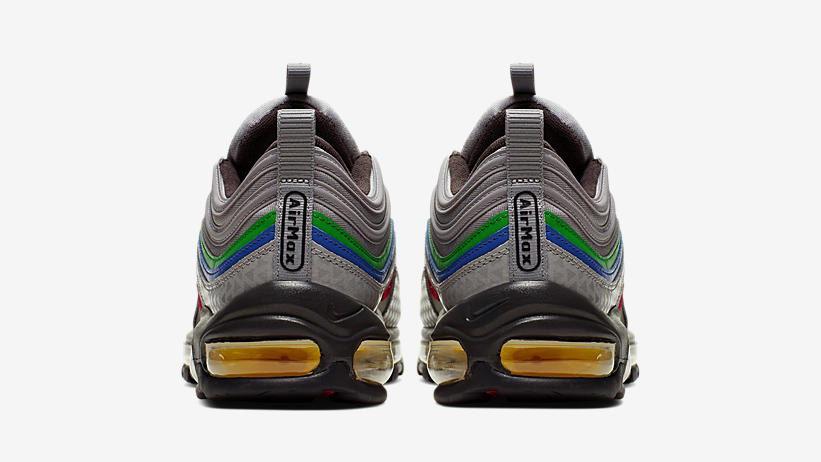 However, this is far from the first time that Nike and other companies have piggybacked on gaming system design ideas for their product lines. In 2008, inspired by the classic Atari 2600, Nike released the Air Force II Game Select, featuring the woodgrain and black color combination of the old-school system. At the same time, the Air Force II High Nintendo Wii came in a pristine white with clear cutaways around the swoosh. Also in 2008, Nike released the Air Max BW, a modified Air Max 90 whose colorway resembled the OG Nintendo Entertainment System. And just last December, Nike released the PG 2.5 Playstation in a “Wolf Grey” colorway that resembles the console exterior, and for an added touch included LED lights illuminating the PG and PS buttons.

There’s no indication yet when the Air Max 97 “Nintendo 64” will be released, but the price is evidently set at $160 so keep an eye out for drop information.