If you’re a 90s kid, you grew up in a time when cartoons were still drawn by hand, rather than animated by computers, there was a scarcity of screens in any given home, and if you were lucky to have the internet, it moved at a snail’s pace. Pogs were in, Rubik’s cubes were out, and Saturday mornings were the time you could gloriously hog the TV and watch cartoons (probably because all the grown-up channels were still playing infomercials at 7 AM).

There’s a special place in my heart for the beloved cartoons that would greet me bright and early on Saturday mornings, where Nickelodeon’s cartoons would dominate the airwaves. These cartoons were whimsical and witty, and above all, fun. IDW in partnership with Nickelodeon has just launched a Kickstarter for a game that lets you relive those lighthearted days with characters you grew up to love (or hate) as a child:  Nickelodeon’s Splat Attack! (currently funding on Kickstarter) plays as an epic crossover event from beloved Nickelodeon shows where characters battle it out in a crazy food fight.

The game’s designer, Jonathan Ying, gave us insight as to why this sort of crossover game just works:

“I think the ‘Food Fight’ theme was really the idea that brought everything together. Nicktoons are all incredibly different properties but if there’s one thing they all seem to have in common it’s food. You could probably write a graduate thesis on the use of food in pop culture and cartoons, but the fact is, every single one of these shows has some humorous relationship to food. Whether it’s something as core to the franchise as Spongebob’s Krabby Patty, or as a recurring figure like Hey Arnold’s unsettling ice-cream salesman The Jolly Olly Man, food jokes kind of unite the whole of the Nicktoons brand.”

Jonathan has some pretty impressive design credits under his belt. He co-designed Star Wars Imperial Assault and was the designer of Doom: The Boardgame. He recently independently designed and published Bargain Quest. As he put it:

“Doom, Star Wars, and Splat Attack are all really different properties with different design needs but at the end of the day, all of them were big parts of my childhood. But coming out of big mechanically heavy games like Imperial Assault and Doom, I had a desire to make something a little more approachable that was still exciting and thematic. When we got started on Splat Attack! we knew it had to be something fun, charming and altogether a bit wackier than anything I had done before.”

While the concept is whackier, the mechanics are accessible and straightforward, translating that whimsy into an altogether solid gameplay experience.

Players build a team from the available characters: the Kickstarter base game starts with characters from the four shows: Rugrats, Hey Arnold!, Spongebob Squarepants and Invader Zim (though IDW Games does promise that new characters and shows will be unlocked through stretch goals.) You can build your teams to be show-based or swap out to build a custom team across multiple shows. Each character has unique stats and is represented by a 32mm miniature that is placed on the board.

Jonathan described how he captured the characters and the game feel in the design:

“We took big inspiration from games like Super Smash Bros. in how it managed to combine a big variety of franchises into a single basic system that still spoke to the uniqueness of the participating characters. The distinctive characters placed over the basic structure of the shared game can create something truly flavorful and exciting!

I wanted each ability to reflect that character’s personality and the core nature of their show. The Hey Arnold crew is very collaborative with an emphasis on teamwork, whereas the more chaotic Invader Zim team is more aggressive and disruptive.

The system went through a lot of testing and revision as we worked to make sure character’s powers felt right for their personality but were still balanced within the competitive nature of the game. I actually often had the most difficult time with the everyman characters like Arnold or Tommy. These sorts of protagonist characters don’t tend to have big exaggerated personality traits like Chuckie’s cowardice or Zim’s megalomania, which meant that they didn’t have as many obvious directions to go with their abilities. Eventually, we came upon cool powers for both of them, with abilities emphasizing Arnold’s ability to bring out the best in his friends and Tommy’s brave attitude.”

Gameplay is straightforward: Each character has a unique set of stats, and when combined with the food they choose to attack with, determine what dice need to be rolled (not unlike miniature games such as X-Wing). You pick a target, roll dice, and determine splat damage. There’s a push-your-luck element to the game, as danger tokens can count as hits but also exposes a character to offering more points to any who successfully attack them. Splats are recorded on your character sheet with splat-shaped components. Players who are splatted lose cool points to those who splatted them, but it also incentivizes players to splat their attackers back to regain those lost points.

It’s not only satisfying from a gameplay perspective, but also from an emotional one. “I’ve seen players take deep satisfaction in scoring a Splat against fan-favorite villains like Angelica or players who are very protective of characters that they love,” Jonathan said of how affection (or lack thereof) can also color the tactical decisions you make in the game.

Those who pick up the game will also get the Reptar expansion, complete with a 100mm Reptar model and a whole new game mode: Reptar Rampage. Players will have to choose whether to attack Reptar and gain points from him or target their opponents instead.

In addition, IDW has announced that the old-school Teenage Mutant Ninja Turtles will be joining the battle as a Kickstarter exclusive. We all know Mikey has been stockpiling pizza for just this purpose, but you’ll have to come up with the puns on your own. 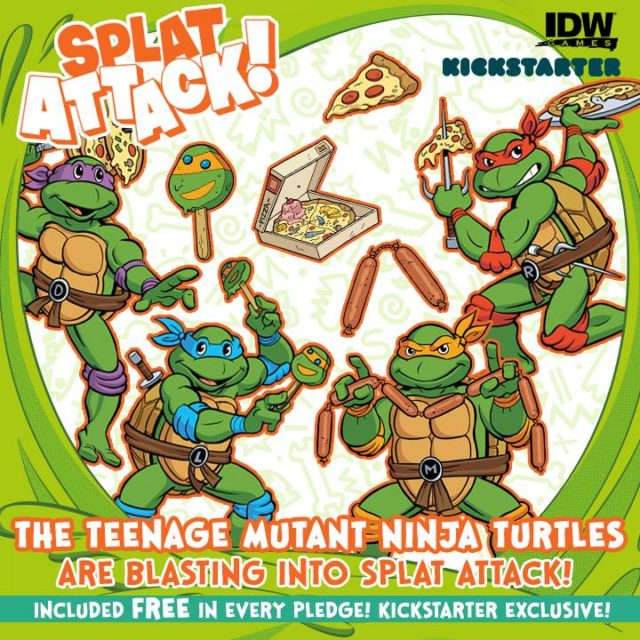 If you want to jump into the food fight fun, be sure to head over to Kickstarter and back the project.

What was your favorite Saturday morning cartoon? Tell us in the comments!