Find an ancient ruin to hide in Indiana Jones and the Last Crusade. Fall into as many traps as you want Return of the Jedi. And hand over your crown The Return of the King. There’s now an undisputed new champion for best third installment in a trilogy. Nick Lutsko is back with another entry in his “Spirit Halloween Theme” song collection. The former President of the spooky season is now everyone’s king. And “Spirit Halloween Planet” promises his reign will involve a whole lot of candy.

We will be required to personally pay him some controversial taxes though.

Nick Lutsko let us know something was coming this year when we spoke to him about the one-year anniversary of his incredible, unsanctioned 2020 theme song for Spirit Halloween stores. That classic was quickly followed by another, His fantastic—fully sanctioned!—sequel, “ Unleash Your Spirit.” What we didn’t expect was for this new song to exceed our seemingly impossible expectations for it. And it totally does.

This year he teamed up with October’s signature pop-up schain to kick off October with “Spirit Halloween Planet.” It’s just as weird, wonderful, and rocking as his first two songs. Thanks to an amazing video though, it might be the funniest installment yet. 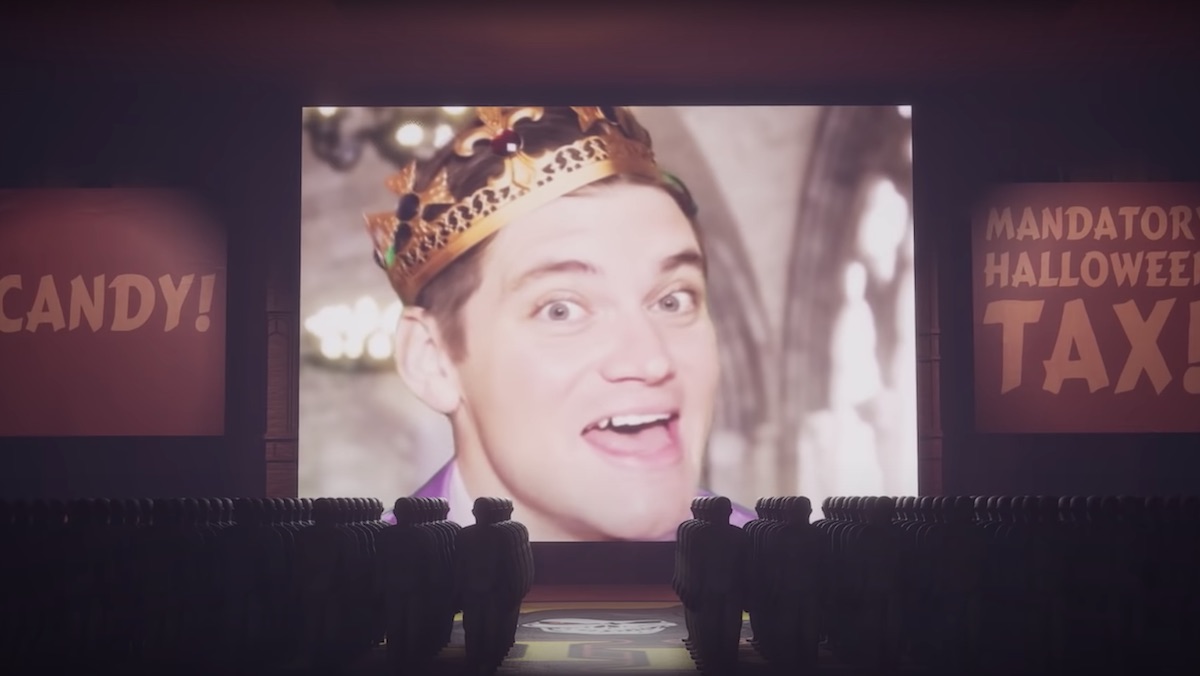 From Beetlejuice and the Titanic, to political prisoners and an an entire army of naked Jeff Bezos monsters, the self-named king of a never-ending Halloween takes us to places no normal person would expect to go. Including to the kind of self-sabotage within Lutsko’s own fantasy that is always one of his funniest bits.

You’d think that people would be grateful their tax dollars went towards something as cool as candy. But that’s politics/heavy-handed monarchy for you.

It’s here! I’m so honored I got asked to produce all of the visuals for this amazing song! Used Unreal and a 3090 to make rendering this much 3D possible on such a quick timeframe.
I’ll do a more technical write up later, but for now just enjoy!

Lutsko also talked to Vulture, where the song debuted, about his latest Spirit’ed track and how he has no idea where his the story goes next. He also made sure to credit Brielle Garcia for the incredible video, which is just as entertaining as the song. It also required a lot more time than he usually gives for his songs. Unlike most of his other hits, Lutsko took more than 24 to 48 hours to write, record, edit, and post the whole thing.

That makes perfect sense. You need more than a couple of days to make the third best installment of any trilogy ever. But, we do have a couple of questions for our new Halloween King: just how high a tax are we talking and how much candy will we be getting under your rule?