My affection for Disney Villainous since I first had my hands on the core game has been constant and it has regularly hit my table. Highly lauded, the game earned accolades as one of  Geek & Sundry’s best games of 2018, as well as Best Game of 2018 at the New York Toy Fair. Despite its recognizable theme, the game is one of the most sophisticated licensed worker placement games, with its asymmetric design, its balance of individual tableau play and resource management with take-that mechanics. It’s a design whose license helps develop mechanical understanding and mastery; the goals of any given villain and the ways they attain victory are pulled straight from their ubiquitous movies.

There was just one problem: there are only six villains in the core box: Queen of Hearts, Captain Hook, Jafar, Ursula, Prince John, and Maleficent. They are iconic, yes, but there are certainly equally beloved villains out there, and the back of the rules in the core box asked one question: 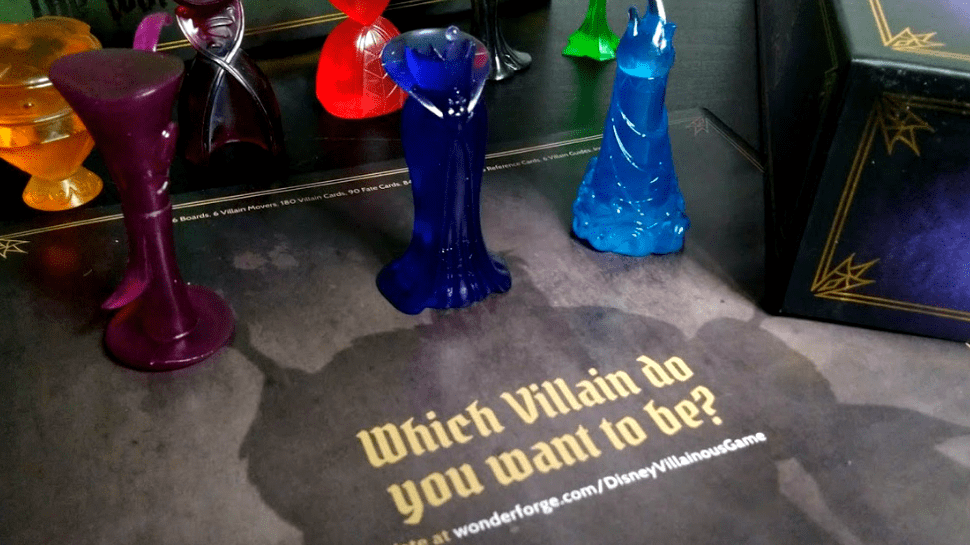 So it was with great anticipation that an expansion would grow the game and provide players with even more options to go head to head. With Disney Villainous: Wicked to the Core Ravensburger delivered just that: an immersive gaming experience, new mechanics, and more villains. The format of the box is as a standalone expansion: it can be played and mixed in with the core box, but it can also be played as a 2-3 player game on its own, using the same basic rules as the core set, but with a few twists the new villains — The Evil Queen, Hades, and Dr. Facilier — bring to the boards.

You can see how the game plays in this How to Play video:

You’ll notice that the three new characters wield great magic. The Evil Queen’s objective is to defeat Snow White, and her board introduces a brew poison action, unique to her, in the Laboratory. The Evil Queen has few allies to rely on (even the Huntsman fails her) so in order to vanquish enemies, she’s got to poison heroes herself by employing the “Take a Bite” card, which she can only use on heroes in her location in her realm. She still has her beloved Magic Mirror, and as she does in the movie, can use it to find Snow White. 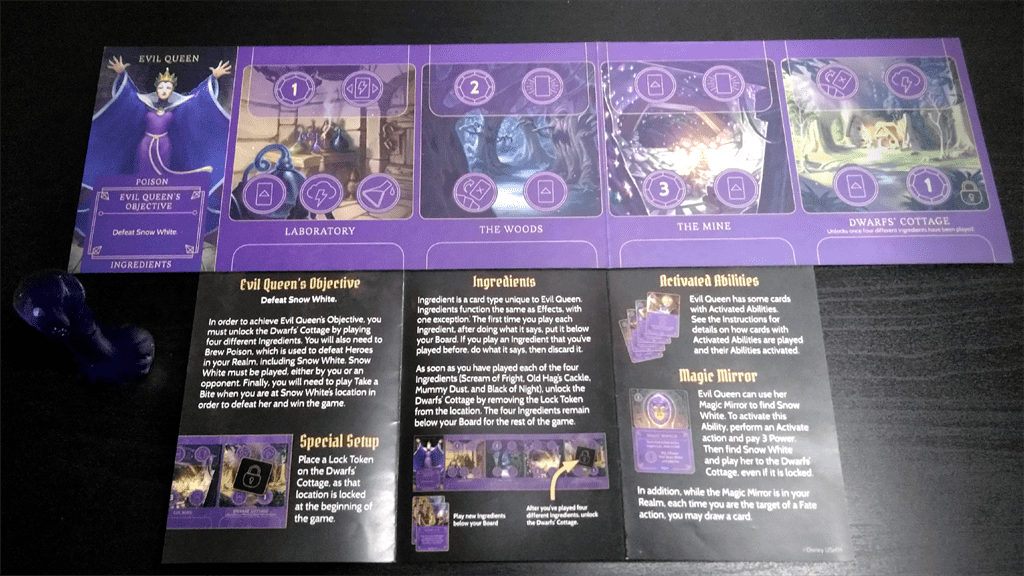 The challenge of playing the Evil Queen comes in players trying to balance the need to vanquish the multitude of allies Snow White has, while also gathering the ingredients and creating enough poison to defeat Snow White. The Evil Queen’s twist is ultimately the introduction of an entirely different resource to manage in Poison. The Evil Queen can take an action on her board to turn Power into Poison and can use items to generate poison, but ultimately Poison means there’s one more resource to manage, and one more action to spend in order to develop the resource. It’s a sophisticated addition to a worker placement game whose base only initially had one resource.

Hades is trying to find specific allies to help him defeat Olympus in his war. The Titans act much like allies for Hades when played, and have additional benefits, but can also be trapped (and thus somewhat neutralized) by heroes. 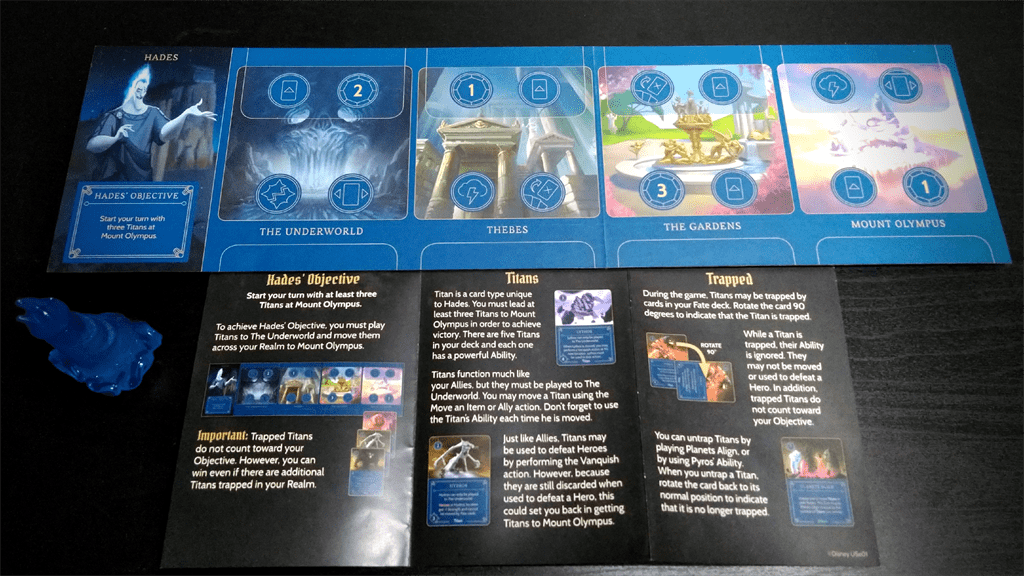 A player playing Hades is racing against the clock – for Hades it’s a race to get the Titans to Olympus, at which point they must keep their Titans from becoming trapped so they can start their turn. The straightforwardness of Hades’ objective makes him an easy target to frustrate, but having allies who also help achieve his goal means that a Hades player needs to be prepared to sacrifice a Titan or two to achieve victory.

Of the villains, Hades’ mechanics are the most like those of the villains of the original Disney Villainous, and it makes him a great starting villain for those new to the game.

Finally, there’s Doctor Facilier, whose Fortune Pile mechanics bring deckbuliding mechanics to the table. While each villain has their own prebuilt decks for gameplay, the Fortune Pile consists of cards that the player and their opponents put into the pile.  In order to win, Dr. Facilier must reveal the Rule New Orleans card from the Fortune Pile, while controlling the Talisman (an item). 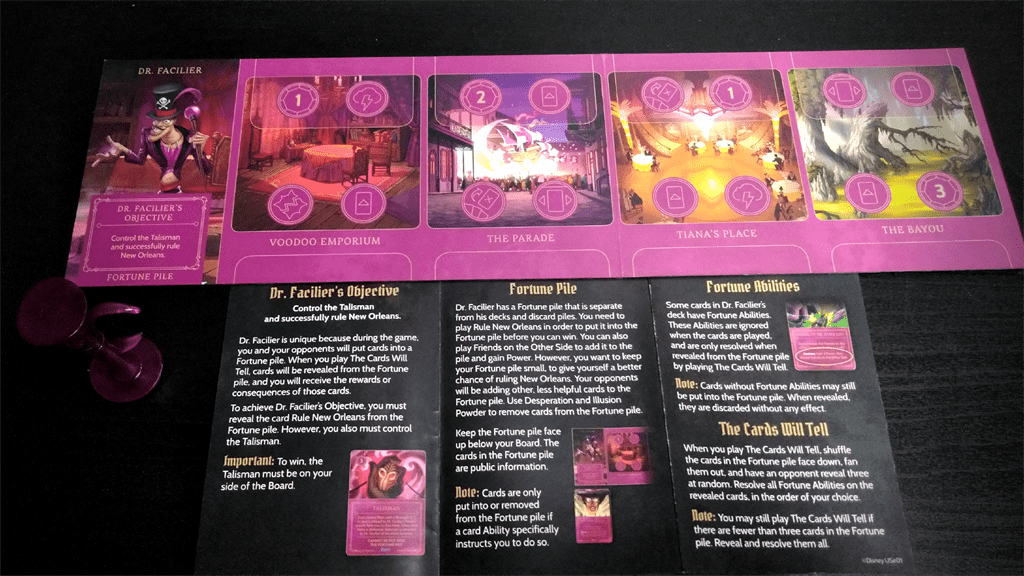 It seems simple enough, but the Fortune Pile can be loaded by opponents with cards that are useless for the player using Fate card actions. It’s a completely new mechanic, and one that requires some mental overhead for the player controlling Dr. Facilier as they track the probabilities they’ll pull the card they need against the number of cards in that pile, while also trying to figure out the chances that a card which could cancel a drawn Rule New Orleans card (yes, those exist) may also be in their Fortune Pile.

Ultimately, the new villains of Wicked to the Core bring a freshness to the game that fans of the original Disney Villainous will appreciate, while also being a great introduction to the Disney Villainous mechanics (which makes Wicked to the Core a great gift for Disney fans.) These aren’t simply rehashed villains from the original set – they are fully fleshed out play experiences that are equally delightful as the villains of the original box while playing differently. See these villains in action in this episode of Game the Game:


Thanks to Ravensburger for partnering with us on this article. Check out the game!