Disney Villainous Is More Than Just A Family Board Game - Nerdist

Disney Villainous Is More Than Just A Family Board Game

“Can we play Villainous again?”

It’s a question that has regularly greeted me over the last few weeks from my 9-year old ever since the first time we played it. She loves it, and so do I, despite the fact that there are moments where I think to myself mid-game, “What kind of villain have I raised?” But we’ll get to that.

The premise of Disney Villainous is simple: players take on the role of a Disney Villain, trying to fulfill their destiny. Available characters to play are Maleficent, The Queen of Hearts, Prince John, Ursula, Jafar, and Captain Hook, and each has a unique victory condition. Despite the fact that the game box says the game is for ages 10+, and the fact that my family is completely enamored by the play experience, I would not call this game a family game in the traditional sense, both mechanically and thematically. That’s actually a good thing.

Each player chooses a Villain, with 2 decks of cards unique to them: a Villain deck, filled with cards to help them vanquish enemies and move closer to their ultimate goal, and a Fate deck, which is filled with Heroes (the villain’s enemies) and effects that undermine the Villain. They also get a tableau (referred to as their realm) with four locations. Every round, players move their Villain token to a location they do not currently occupy and take the actions associated with that location in any order they choose. There are a different set of actions associated with every location – players can acquire power (the resource that fuels the path to the Villain’s victory), play cards on their tableau, move cards around, discard cards from their hand to draw new cards, and (my daughter’s favourite) draw and play Fate cards in an opponent’s realm. 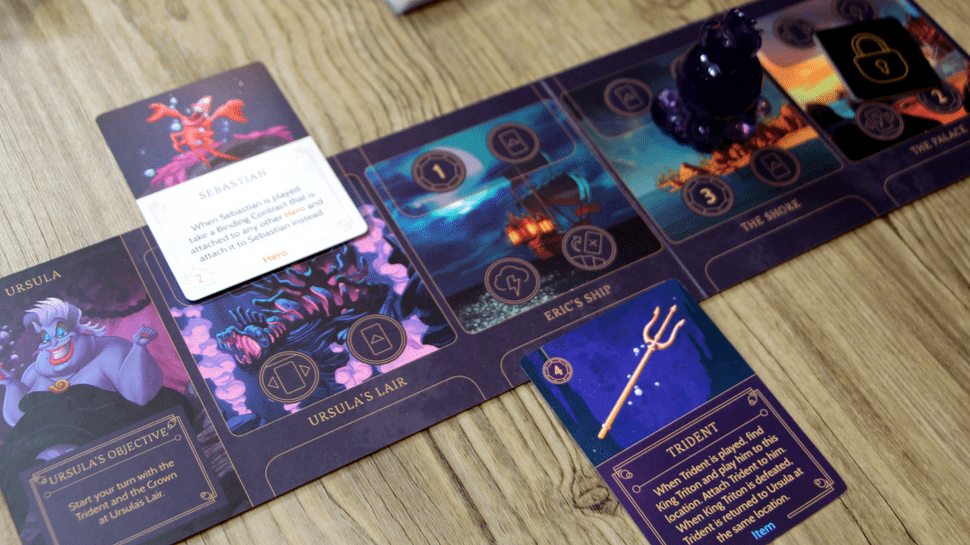 Villains draw cards from the Villain deck and play them to move closer to their ultimate objective. Heroes who emerge from a Villain’s Fate deck impede the progress of the Villain through their own effects, as well as denying a Villain available actions for a location by covering them up. It’s easy to sympathize with the Villains of the story when you look upon a tableau full of Heroes and see nothing but nuisances keeping you from your ultimate victory. When your turn comes around, you get that evil twinge of satisfaction when you vanquish those Heroes from your realm.

There are no dice: this game isn’t luck-driven. Instead, players find their way to victory through scheming and being opportunistic. Which brings us to the theme: Villainous isn’t just the literal name of the game, but also the figurative one. Players are encouraged to be villains and antagonists to each other – each tableau offers locations with a Fate action, meaning players are compelled to mess with the plans and intervene in the realm of other Villains. Players aren’t just working towards their own objectives, but actively trying to undermine the plans of other players around the table. 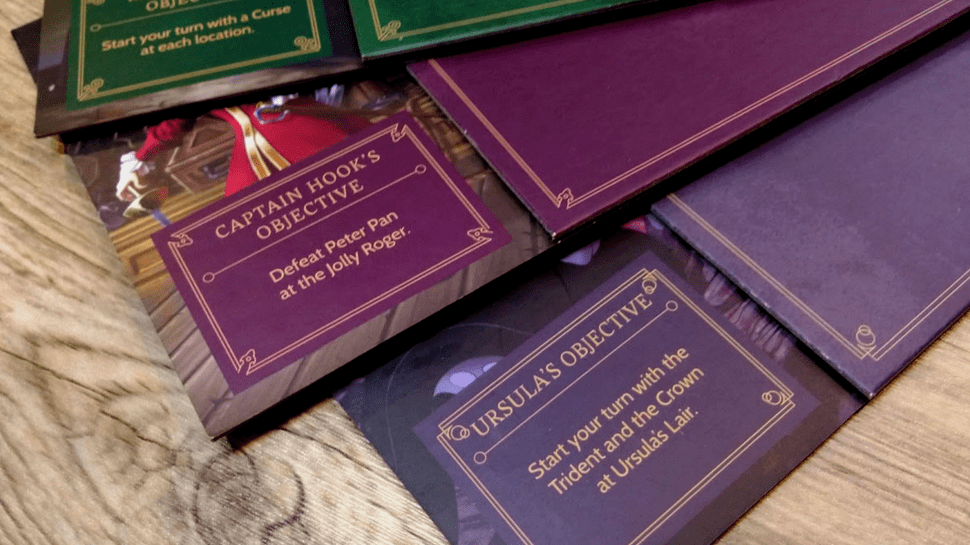 Were I to classify this game, I’d call this a mid-weight hybrid boardgame. Stripped down to the nuts and bolts, it’s a worker placement game with hand management and resource management mechanics unique to each Villain as they work towards their own unique victory objective, with a solid dose of take that built into the structure of the game. Players are given a lot of choices each round, and thus feel the pain of opportunity cost with every turn they take (a hallmark of games that are strategically deep).

That description is a cold mouthful, though, for a game that is utterly full of delight. The translation of these iconic Disney Villains and the realms they occupy, the heroes they battle and their ultimate goals is a joy to experience. Moreover, players become villains themselves. You’re not just playing a villain – at a certain point in the game, while you’re gleefully executing a plan that moves you towards your objective while significantly impeding the progress of your opponents, it feels good to be bad. Talk about an experience in true game immersion.

The theme and universe are baked into the game. Every element is thematic. The choices you’re given as a villain make sense and are true to the characters. The representation of beloved Disney characters are brilliant and accurate. It’s really not a stretch at all to imagine the movies of our childhoods playing out the way they do on the table had the villain won. The narrative is part of the game.

On top of all of that rich gameplay, you have beautiful components. The longer you look at the different elements of the game, the more details you find, and the more you are delighted by them. For example, each realm tableau has a characterful quote from the villain on the side of the board that isn’t even seen when the game is being played. It’s totally extraneous to the gameplay experience (indeed, while playing the game, it’s invisible) and yet it puts a smile on my face when I pull out the boards for setup. 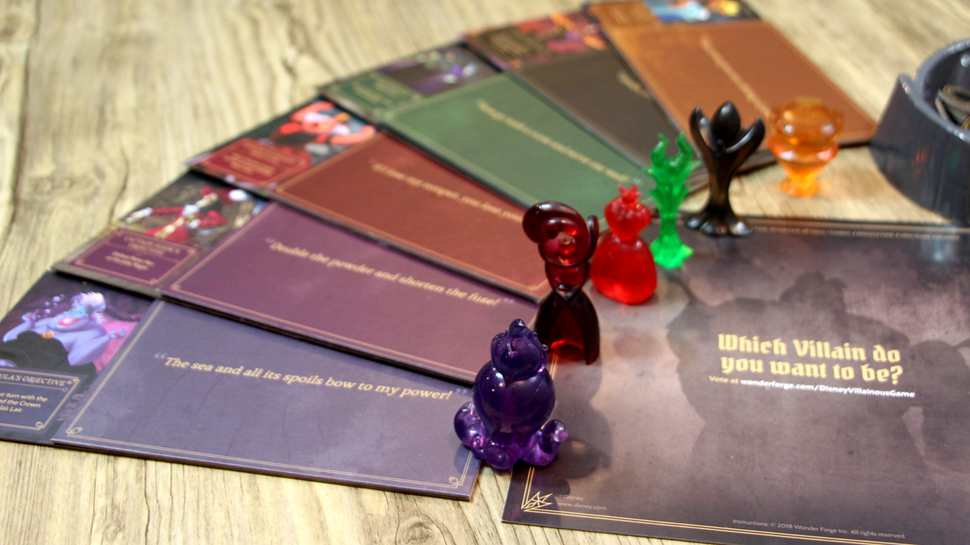 In that same vein, the card backs for the Fate and Villain decks are beautifully illustrated – again, a detail that wasn’t necessary but is appreciated by a keen eye. It’s easy to assume the art used on the card fronts are simply pulled from the movies, but upon closer inspection, it becomes clear every illustration was created specifically for the game. Beyond the cards, the Villain movers (the representation of the Villains in their realm) are utterly characterful and substantial. What could have been a bland standee or a characterless meeple is instead an abstracted, substantially-sized bespoke in-game sculpture. 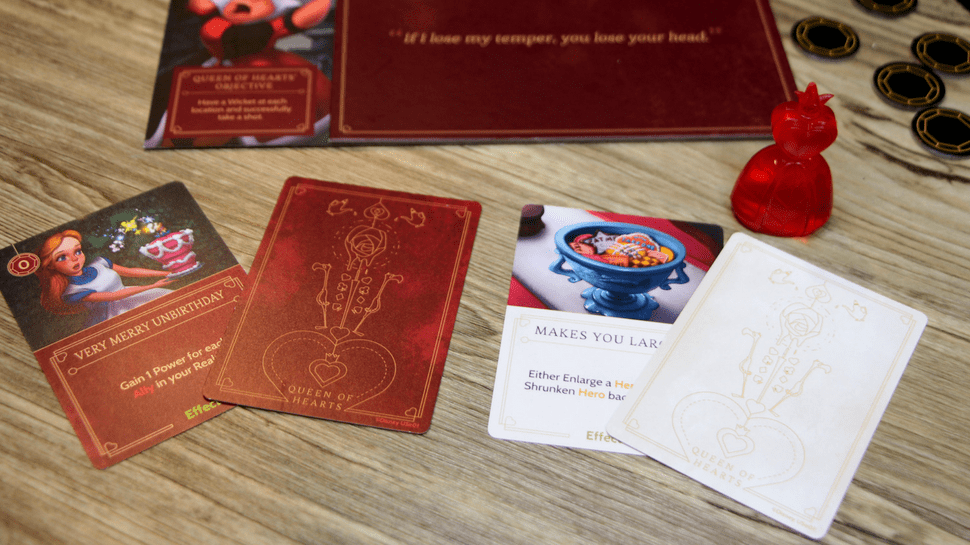 It’s for all these reasons I don’t classify Villainous as a traditional family game: the games I classify in that category are sweet and unsubstantive, like candy. You roll dice, you move tokens, and victory is as much a product of luck as it is skill. Most family games don’t let you feel like you are in control of the game’s outcome.

With Villainous, like the Villain of your story, you feel as emboldened and empowered to control your destiny. Villainous is a game that sticks with you. It’s a deeply immersive and thematic experience. It gives you replayability in that the game both offers novelty (as each Villain uses different mechanics for victory) and rewards familiarity (the more familiar you are with your Villainous and Fate decks, the better you’ll be able to play). You’ll be thinking of ways to play a particular villain better or which villain you’d like to play next time long after your last game was over.

Between the production value within the box and the incredible game experience, the $34.95 MSRP will make you feel like Aladdin, thieving in the market. The game is a steal at that price point.

After all that, the only other thing I can say is that Disney Villainous is a special game. It sits among the best games released this year that I’ve played, and is a serious contender for game of the year.

Disney Villainous will be on store shelves at reputable game retailers including your favorite local game store on August 1, 2018. Visit WonderForge.com/DisneyVillainousGame for more information. Stay tuned here at Geek & Sundry as Becca Scott will be busting out Disney Villainous on next week’s episodes of How to Play and Game the Game.

Which Disney villain is the most dastardly? Tell us in the comments!

This post was sponsored by Wonder Forge, though the opinions of the writer are her own.