Songs May Spread Like Diseases Do According to New Study - Nerdist

Songs May Spread Like Diseases Do According to New Study

Although we’re all probably a little (or a lot) burnt out on talking about infectious diseases, the conversation appears to be endemic. In a new scientific study, a team of researchers applied disease transmission models to music—an idea that seems surprisingly intuitive. And they found songs can indeed spread like infectious diseases. Especially Electronica songs, which are very contagious.

Boing Boing picked up on the new study, which recently appeared in the journal Proceedings of the Royal Society A: Mathematical and Physical Sciences. Mathematical analyst Dora Rosati led the team of researchers, who began their work by wondering if it’s possible to take the mathematical models usually used to describe the spread of infectious diseases and apply them to the process of how songs grow in popularity. 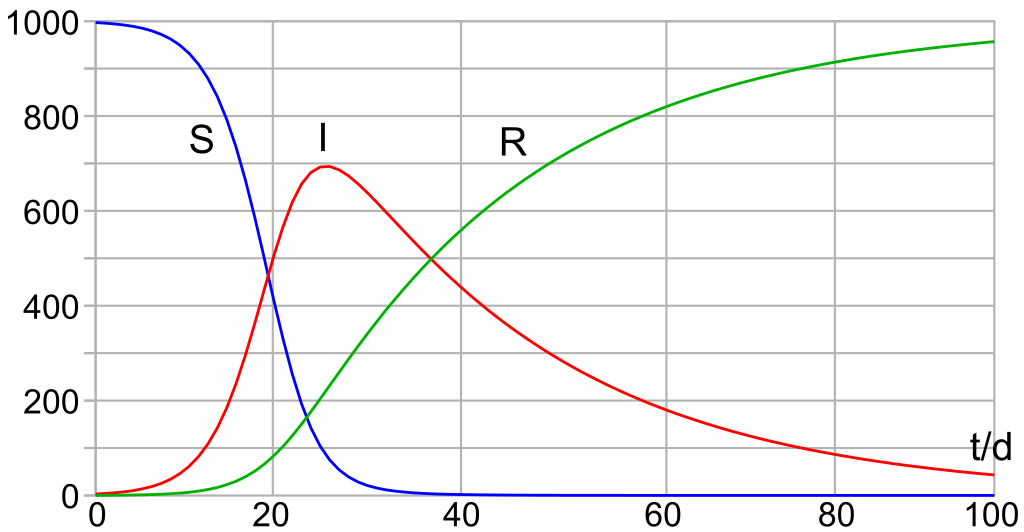 To test their hypothesis, the researchers analyzed data from the now-defunct music streaming service MixRadio. The researchers looked at 1.4 billion song downloads between 2007 and 2014, focusing on the top 1,000 songs people in the UK downloaded during the timeframe. Lo and behold, when the researchers applied the standard susceptible–infectious–recovered (SIR) epidemic model—in the image above—to growth in song popularity, they found it fit well.

The researchers specifically looked at their subject songs’ basic reproduction number (or “R0”). Meaning how “infectious” they were between a prime listener and subsequent listeners. For example, if a person listened to a song and then shared it with two other people, the researchers assigned it with an R0 of 2. 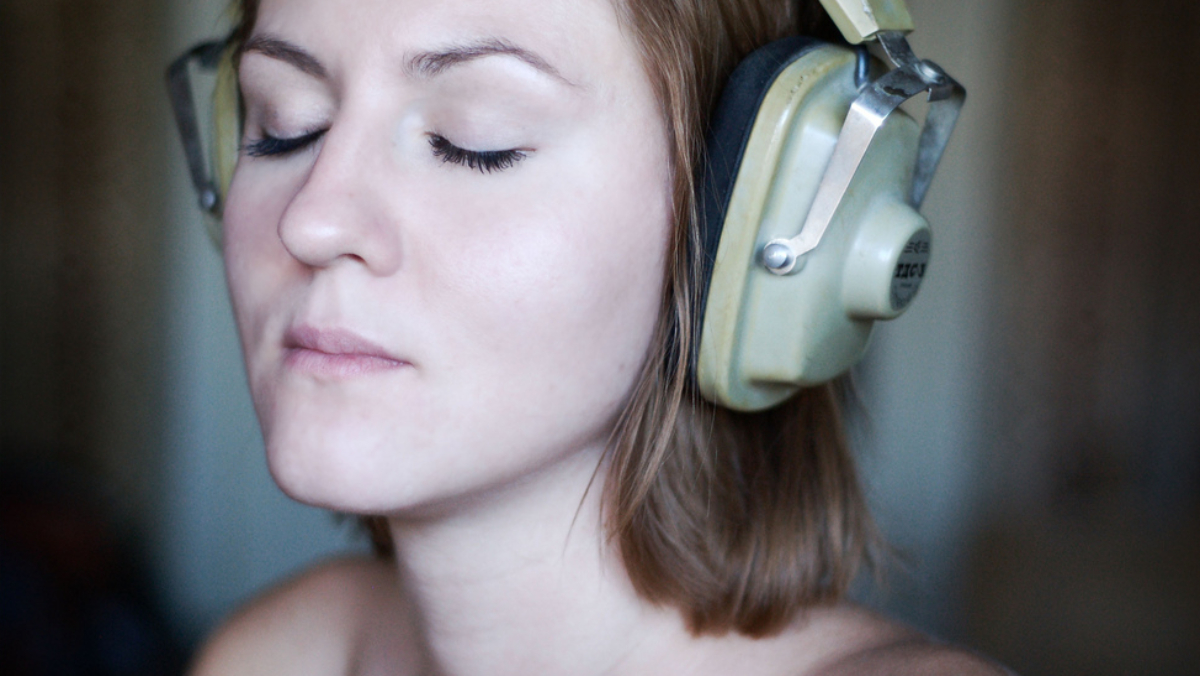 When divvying up the results by genre, the researchers found massive disparities in R0. A report from The Guardian on the study notes that dance and metal had the lowest median R0 scores, at 2.8 and 3.7, respectively. Popular music was ten times as transmissible with a median R0 of 35. However, rock and rap/hip-hop blew pop out of the water with R0’s of 129 and 310. Another near tenfold increase in the case of the latter genre.

The title for “most transmissible genre” belonged squarely to electronica, which had a median R0 of 3,430; meaning if a listener liked say “Genesis” by Justice, they’d pass it on to 3,400+ other people. For reference, Rosati told The Guardian that measles—a highly transmissible disease—has an R0 of 18. 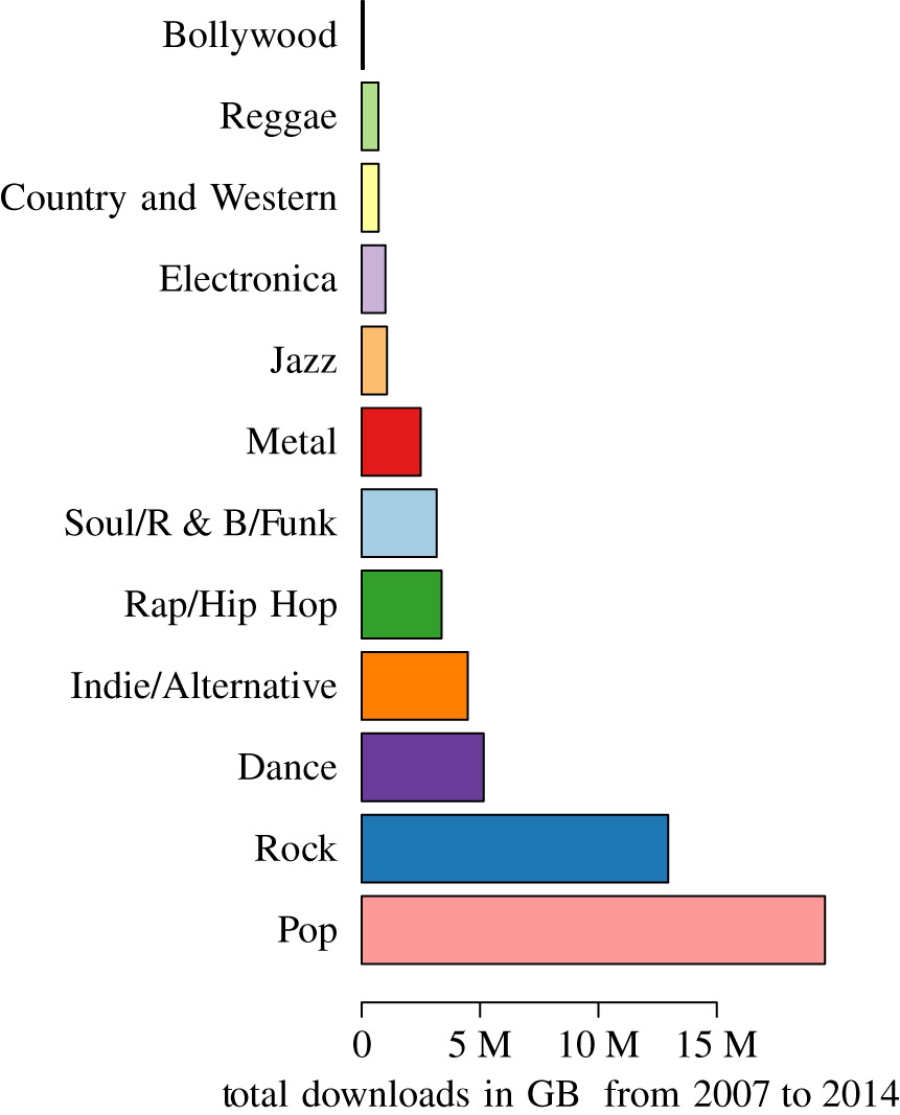 Rosati et al. / Proceedings of the Royal Society A

The researchers note that a high R0 for a genre did not equate proportionally to a total number of downloads; a fact the graph above shows vividly. Even though pop music spread much slower than electronica did, for example, it ended up with far more total downloads.

As for why this is the case, the researchers again parallel the spread of music with the spread of disease. They note that in the case of electronica music, many people have an “immunity” to it. Meaning they just don’t listen to the genre, so they never hear any of the songs. As for those of us who love the genre, we actually enjoy being hyper infectious. That just means the beat’s good.