NASA Spotted a Galaxy Shaped Like a STAR WARS Ship

A long time ago in a galaxy far, far away, rebels battled the evil Empire. Now NASA has spotted a different galaxy far, far away that reminds us a lot of Star Wars. It features an unmistakable shape fans of the space saga will instantly recognize. The galaxy looks just like a TIE Fighter.

Almost five years ago, NASA’s Fermi Gamma-ray Space Telescope found a faint source of gamma rays from a distant galaxy. Astronomers have since mapped TXS 0128+554 (also known by the far more pithy TXS 0128) using radio waves. Real science met science-fiction when they took a much, much closer look. They found the galaxy resembles the Empire’s small spacecraft from Star Wars. And it really does, as the images shared by the agency (which we first heard about at Gizmodo) immediately recall those infamous fighters.

“After the Fermi announcement, we zoomed in a million times closer on the galaxy using the VLBA’s radio antennas and charted its shape over time,” said Matthew Lister, a professor of physics and astronomy at Purdue, in a statement. “The first time I saw the results, I immediately thought it looked like Darth Vader’s TIE fighter spacecraft from Star Wars: Episode IV – A New Hope. That was a fun surprise, but its appearance at different radio frequencies also helped us learn more about how active galaxies can change dramatically on decade time scales.” 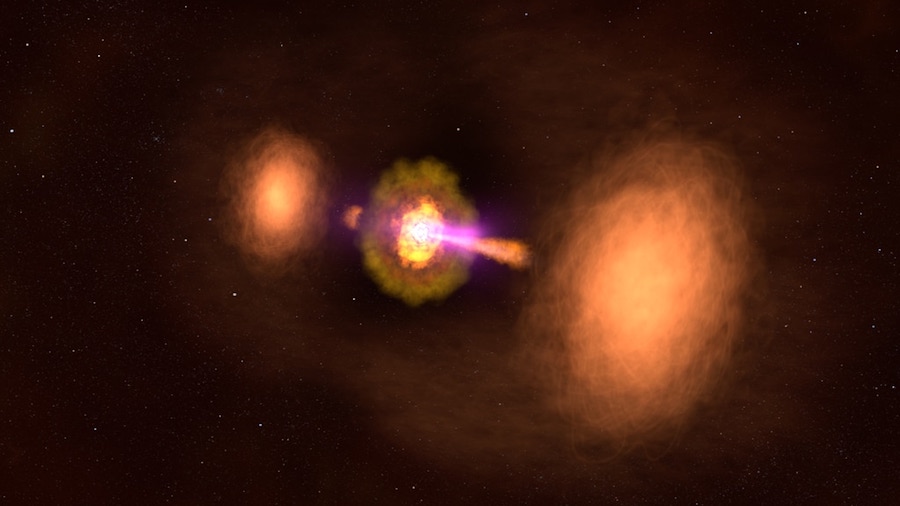 Lister and his team published their results in a paper, which also explains why it took five years of observation to map. TXS 0128 is not tilted towards Earth. So the light from each side reaches us at different times.

But, honestly, we’re here for the giant TIE fighter. And it is giant, coming in at 35 light years across. Don’t worry about this being J.J. Abrams newest mega killing machine. The active galaxy, found in the constellation Cassiopeia, is 500 million light-years away. It doesn’t matter if it has a hyperdrive, either. It’s “anchored by a supermassive black hole around 1 billion times the Sun’s mass.” 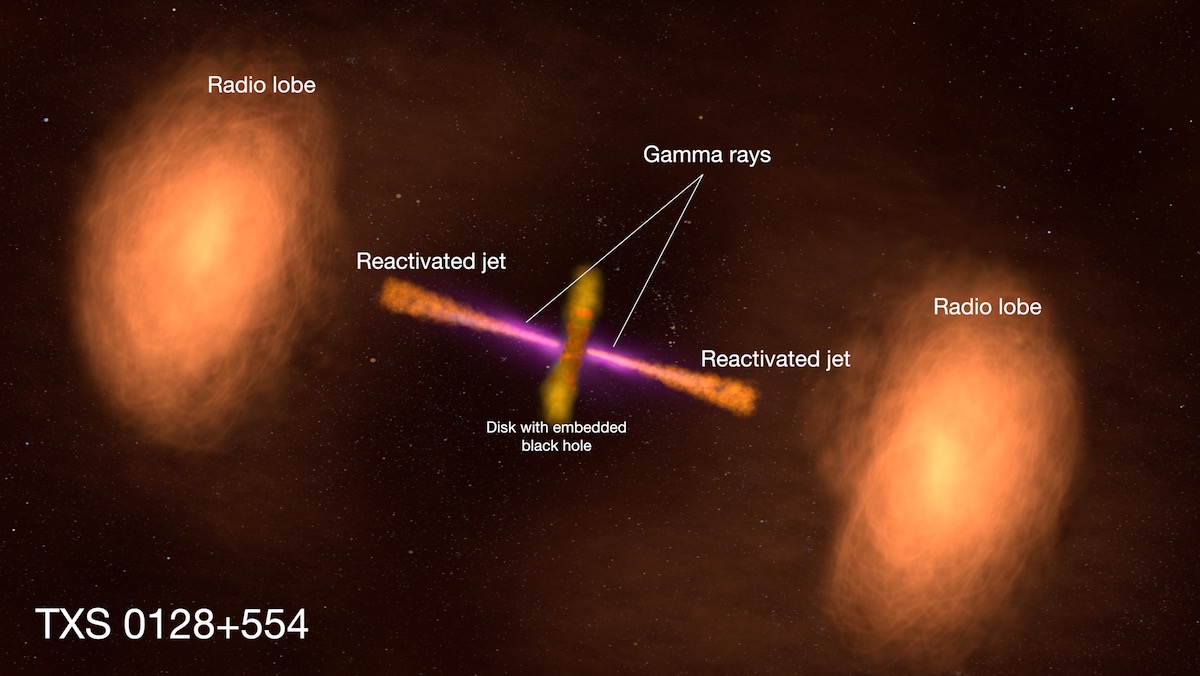 That blackhole could be contributing to the TIE shape, which comes from the two “jets” on each side. From NASA:

“An active galaxy’s extra energy includes excess radio, X-ray, and gamma-ray light. Scientists think this emission arises from regions near its central black hole, where a swirling disk of gas and dust accumulates and heats up because of gravitational and frictional forces.

Around one-tenth of active galaxies produce a pair of jets, beams of high-energy particles traveling at nearly the speed of light in opposite directions. Astrophysicists think these jets produce gamma rays. In some cases, collisions with tenuous intergalactic gas eventually slow and halt the outward motion of jet particles, and the material starts to flow back toward the galaxy’s center. This results in broad regions, or lobes, filled with fast-moving particles spiraling around magnetic fields. The particle interactions create bright radio emission.”

So no, the Empire is not building a super weapon. But just in case, remember, you need the Force to shoot down Death Stars, not TIE fighters.