It was 25 years ago when the good ship Muppets set sail on the second of their classic literature adaptations, Muppet Treasure Island. Our favorite felt friends set off in search of buried treasure and irreverent jokes. (Swapping out humbug for swashbuckling and Michael Caine for Tim Curry in the process.) Like all of the great Muppet films before it, Treasure Island featured its own collection of earworms. In honor of this anniversary, here are our rankings of all the Muppet songs in the film.

The soundtrack considered this a song, but what is there to even say about it? Sure, it draws from the Robert Louis Stevenson novel. But watching it in the movie now? It’s just a chant that feels like it’s about to get cut out of the Jungle Cruise ride when Disneyland reopens.

This feels like they realized they hadn’t given either Kermit or Miss Piggy a song and needed to rectify that. Despite that, parallels between pirates finding treasure and a fairly sincere love ballad (or as sincere as a love ballad between Kermit and Piggy can be), make this land fairly well. Still, I just watched this movie last summer and forgot this song was in it until now, so…

Maybe a little too close to home these days. The crew of the Hispaniola find themselves stuck on a Zoom ca—er, in a calm in the ocean. This song… it’s a lot. It’s one of the songs I best remember being in the movie, but also one that I almost always forget anything about except that it existed. That largely has to do with the fact that it has no real consistency to it; it changes almost every other stanza to reflect each sailor’s delirium.

One of the most cut-and-dry “I Want” songs in the entire Muppet discography. That’s exactly why it ranks so low for me. Even with Rizzo and Gonzo doing their best to inject the Mupper humor, the number feels like it could have been lifted from a standard Disney film. It’s not a bad song per se; it’s just an aggressively adequate song from a company that I hold to a higher standard. It also seemingly lives in that space just before movie musicals started taking their vocals way more seriously. And it shows.

Okay, here we go! The third song in the movie, “Sailing,” is the first to feel like a true Muppet song. This song is doing a LOT of heavy lifting. It layers in the elements of Jim’s adventures, the scheming plans of the pirates, and even the running gag of Rizzo’s secret cruise business for the rats. On top of all that, it’s also the act break. Despite how easy a song could collapse under its own weight, it manages to get the movie out to sea and inject that mutual spirit of adventure into all of the characters.

To quote Rizzo the Rat when Billy Bones dies, “This is supposed to be a kids’ movie!” A necessity of the source material to be sure, but opening your Muppet film with a song about greedy pirate murder is a big swing. But they pull it off. The song nails the creepy vibe of the moment, while still injecting the levity of the various puppets creatively laid out across the island in the form of things like animals and idols.

Two of the best types of movie songs: villain songs and Tim Curry songs. And this one joins the ranks of songs that get to be both. And hey, even fishnets are involved, sorta! It’s honestly ridiculous that it takes this far into the film for Curry to lead a song. The film is even aware of that fact and has Curry sing about it. And yet it’s such a fun song that we forgive the whole movie for this sin!

“A Professional Pirate” captures the exact joyful love of pirate stories that are instilled by a book like Treasure Island, or the Pirates of the Caribbean rides at Disney and the subsequent film adaptations. It says a lot about this song that it ranks where it does on this list despite including the painfully ham-fisted On the Waterfront reference line. (That is my absolute least favorite joke in this or any other Muppet media, perhaps ever.) 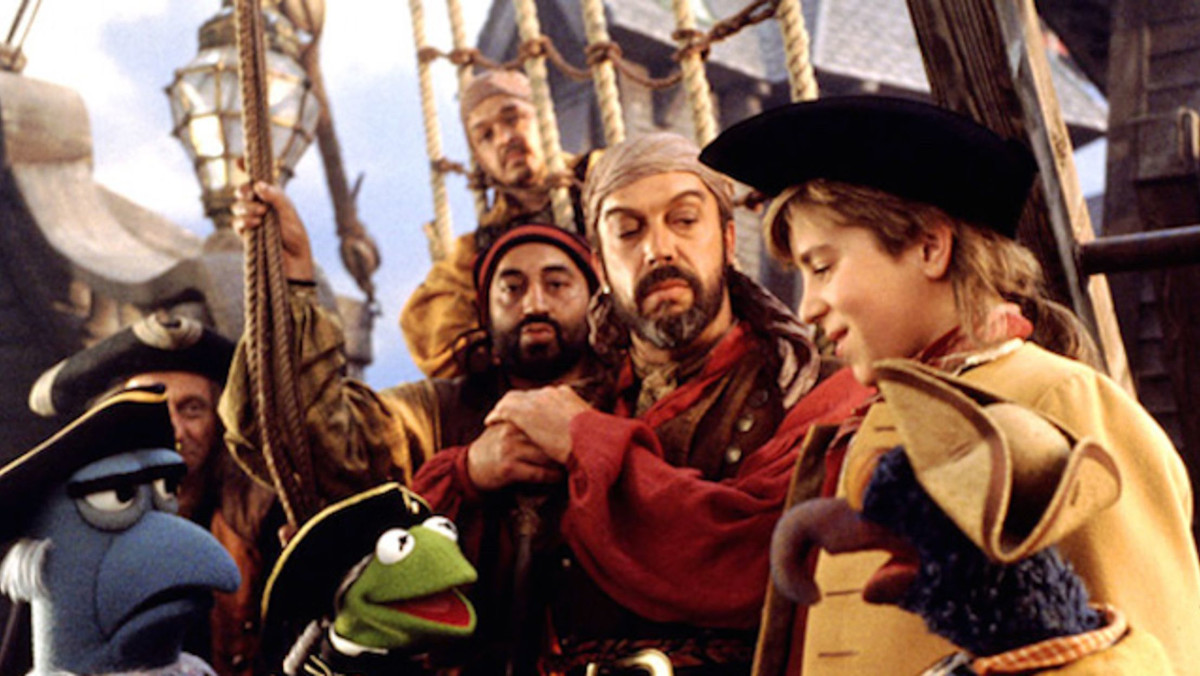 There is a lot to love in Muppet Treasure Island, and many claim it as their favorite Muppet film. However, this revisiting of the songs does reveal perhaps why this adaptation of classic literature format didn’t become a new ongoing standard for the Muppet movies. While Muppet Christmas Carol stands out as one of the definitive adaptations of the Dickens classic, Muppet Treasure Island frequently struggles to blend the tone of the ensemble with Stevenson’s pirate tale.

It is telling that it’s easier to remember and love a song that wasn’t even in Carol‘s theatrical release than ones that did end up in Island. Those looking for this type of work from the Muppets may be better off revisiting The Muppet Show on Disney+.

Muppet Treasure Island is currently available for streaming on Disney+ in the US.