The world of Mortal Engines is one that blends wonder with technology and brutality. Its post-apocalyptic setting showcases a society rebuilt on Municipal Darwinism where cities have survived by becoming mobile, rolling across the ravished earth searching for resources and smaller cities they can “eat” for parts. The mechanical technology has been applied to humans, too. During wars before Traction Cities existed, scientists built lethal Stalkers by resurrecting dead humans using synthetic substances like metal and weaponry. They’re twistedâ€”gruesome even.Shrike, Mortal Engines‘ most terrifying character, played by Stephen Lang, is a Stalker.A new featurette from Universal firmly establishes Shrike as a being that instills fear. He looks like a creature from a horror film, gaunt but powerful. He’s killed hundreds, if not thousands, of people. He’s damn near unstoppable.[brightcove video_id=”5975869945001″ brightcove_account_id=”3653334524001″ brightcove_player_id=”rJs2ZD8x”]Shrike moves with a kind of menacing grace. Lang, who performed the character through motion capture, looked to nature for inspirationâ€”specifically predatory birds. (Fitting, since a shrike is a carnivorous bird.) â€œYou take what you need and leave the rest,” he said. “But, I’ll tell you this: a very, very happy accident I had was I looked at swans because I know swans can be very, very aggressive birds.”

Lang continued, â€œI was looking at swans and what came up on YouTube was Swan Lake. It was Rudolf Nureyev dancing Swan Lake. And I began to watch him, and I began to see Shrike [and] the way he movedâ€¦When a ballet dancer moves, he doesnâ€™t move his armsâ€¦he looked like this folded bird. When you think about it, itâ€™s incredibly graceful and at the same time, thereâ€™s something slightly robotic about it as well, which is kind of right in the wheelhouse of this character.â€He found help from insects as well, citing their ability to hide and be still as relating to Shrike. “All of those wonderful insects that blend into the background and wait patiently either to avoid being eaten or to wait for something to eat [were inspiration],” Lang said. “And so, there’s an element a quality of patience that they have, you know? That’s very much in keeping with this character that also can remain in a state ofÂ  immobility for centuriesÂ  at a time if he chooses.” 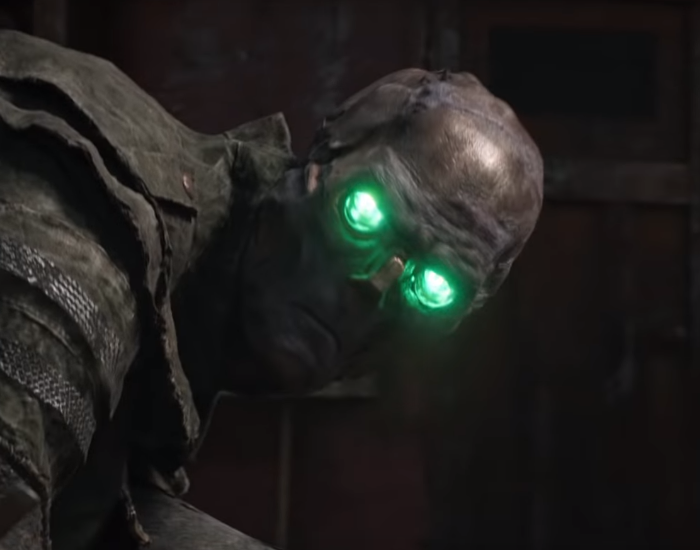 Shrike is more than he appears to be. “He inspires both pity and terror,” Lang said. That combination appealed to him. Shrike’s deadly, but he has a close, almost father-like connection to Mortal Engine‘s protagonist Hester Shaw. The resurrected man took Hester in when she was small and now that she’s gone, it’s a gaping hole in Shrike’s existence that he can’t reconcile. It’s one way that Shrike’s rife with contradiction.Lang explained, “For a character that’s been emptied out, he’s really full. For a character who detests memory or has no use for memory, he’s completely obsessed with memory. For a character who is absolutely heartless, he’s got the biggest heart in the world.”Mortal Engines arrives in theaters on December 14, 2018.