The beauty of a film festival is the crap-shoot aspect of it. A lot of times the films are new or small indies and so you only have a description, an image or two, and maybe a trailer to go on. You have to trust the programmers to give you something you’re going to find entertaining, if not love. So far, Fantasia Fest‘s virtual offering this year has given me an over-abundance of intriguing film offerings, ones which made making a tentative schedule very difficult. But one movie, Monster Seafood Wars, was an absolute no-brainer. One look at the image, a brief read of the blurb was all it took. I was not disappointed.

Having very recently reviewed all 12 Gamera films, and watching  Ultraman at a frankly unhealthy clip in my off-hours, the site of massive sea creatures marauding through Japan hit me just right. But what impressed me most about director Minoru Kawasaki’s movie is just how deftly it parodies specific moments in tokusatsu movies and TV. That the story is an absurdist romantic comedy just adds a lovely, weird wrinkle.

Monster Seafood Wars weaves between regular narrative presentation, faux documentary, and TV news reports. The basic story follows Yuta Tanuma (Keisuke Ueda), a young genius. At the beginning, he’s taking an offering from his father’s sushi restaurant to a local shrine. Someone bumps into him and steals his basket. Before long, a giant squid and a giant octopus, the very fish he was carrying, appear and cause havoc. This leads to the rather humorous reveal that Yuta had worked at an experimental research facility. He lost his job for spending way too much money on a serum to make animals giant. Oops. 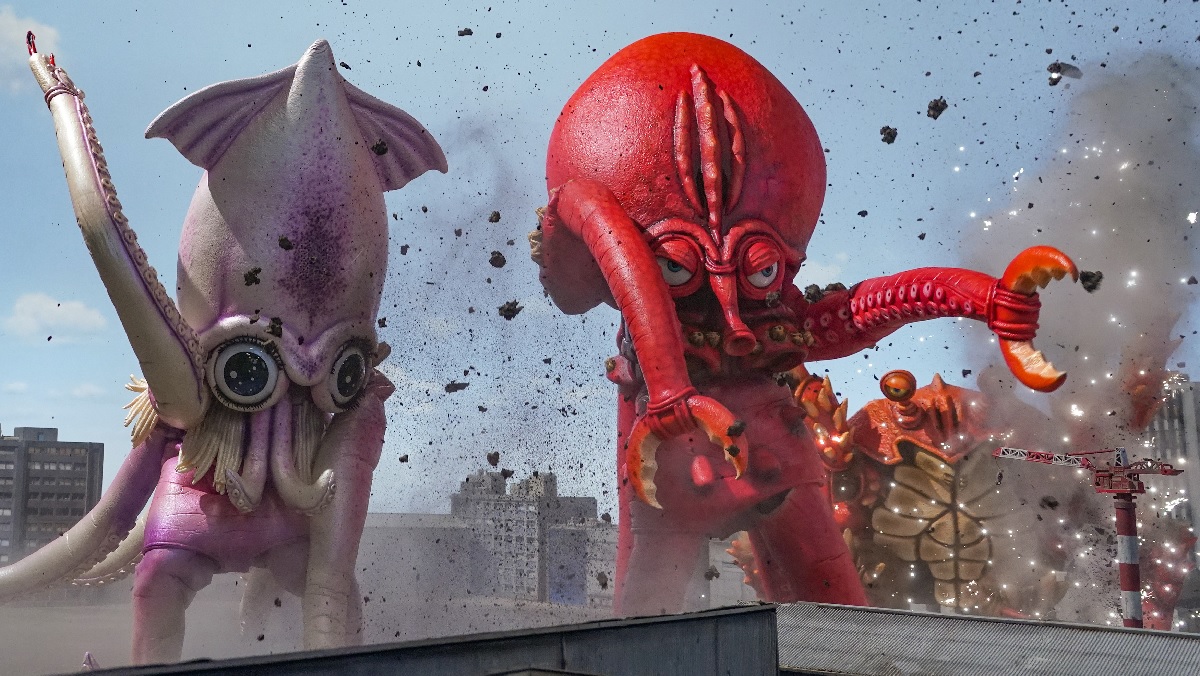 Naturally, he’s the prime suspect for the disturbance, and he has to go see SMAT, the Seafood Monster Attack Team. Adding to the trouble is SMAT scientist (Ayano Christie Yoshida), on whom Yuta has a crush. After talking his way into joining the (frankly way too small) SMAT, his sworn enemy, a rival scientist from his first job, appears with seemingly better plans to take out the monsters.

The movie hangs its outlandish premise on a very basic story; it’s an arrogant outcast trying to make good and better himself, win the affection of another, and best a rival in the process. It’s supremely simple, but the presentation and twists along the way make for a much more exciting experience. For example, following SMAT’s first brush with the kaiju, the squid and octopus lose an appendage each. Out of morbid curiosity, SMAT prepares them as sushi; it’s delicious. From there we get a lengthy aside where we see monster meat is the most delicious anyone’s ever tasted. Food bloggers and YouTubers go wild for it.

While it’s very obvious Kawasaki didn’t have the kind of budget for a cast of thousands-style monster movie, that’s not really the point. The movie is a brilliant satire of kaiju and tokusatsu fiction, as well as modern Japanese society. Each time a monster appears, we get a cutaway of a press conference where the government unveils the official name of it, like the christening of a new franchise.

Kawasaki’s co-screenwriter is Masakazu Migita with whom the director has worked for quite a long while, on other similar projects like  The Calamari Wrestler and The World Sinks Except Japan. There’s a love of Japanese sci-fi/fantasy series and movies in all of these projects, as well as a deep knowledge. Migita’s first writing job was on the 1996 series Ultraman Tiga; there is a lot of Ultraman in this movie. In each of the Ultra series, there’s a government paramilitary/science organization that just so happens to focus exactly on the monster problem at hand. Each have a specific and usually silly acronym name; SMAT isn’t that far afield.

And though Monster Seafood Wars won’t dazzle with its effects prowess or set the world on fire with its narrative construction, it’s a supremely smart and often very funny riff on this well-trod Japanese genre. And it will definitely make you want to each some monster sushi.