Godzilla has been stomping on the city of Tokyo and unleashing atomic fire on unsuspecting citizens for 65 years now, believe it or not. The original Gojira film hit Japan back in 1954 and caused quite a sensation, one which soon spread to the United States and the rest of the world. This launched not only several decades of the atomic monster’s own superstardom, but it gave birth to an entire army of other kaiju creatures from Toho studios as well.

Now, the good folks at Mondo have announced the first in a series of officially licensed offerings with Toho Co., Ltd. All of which are celebrating the biggest and baddest monsters in cinema history! 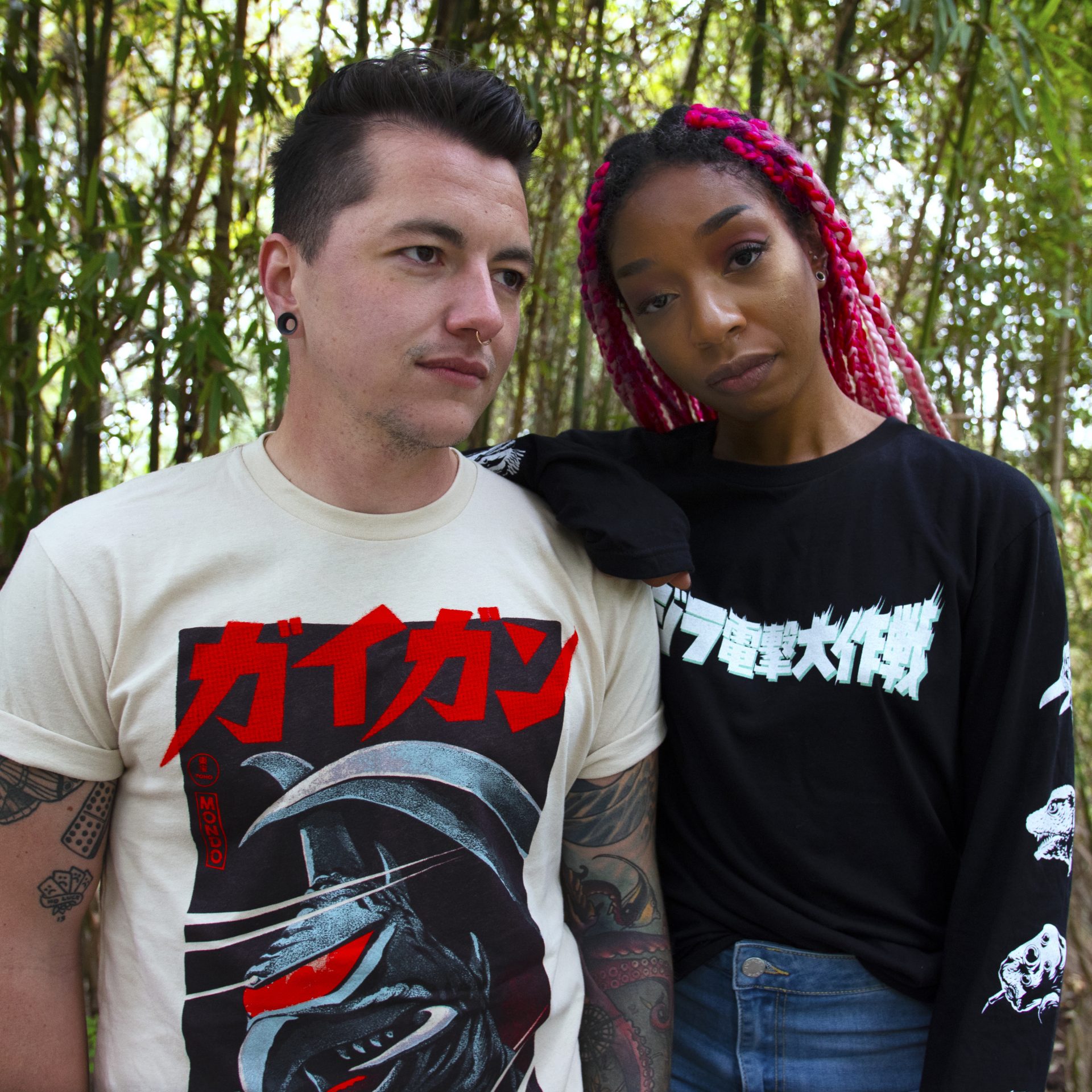 This new collection celebrates not only the King of the Monsters, but also several of the  other iconic giant city-crushing creatures from Toho studios like Mothra, King Ghidorah, Gigan, and Hedorah. Many of these beloved beasts made a splashy return to the big screen in this year’s Godzilla: King of the Monsters, and are therefore back in the zeitgeist. 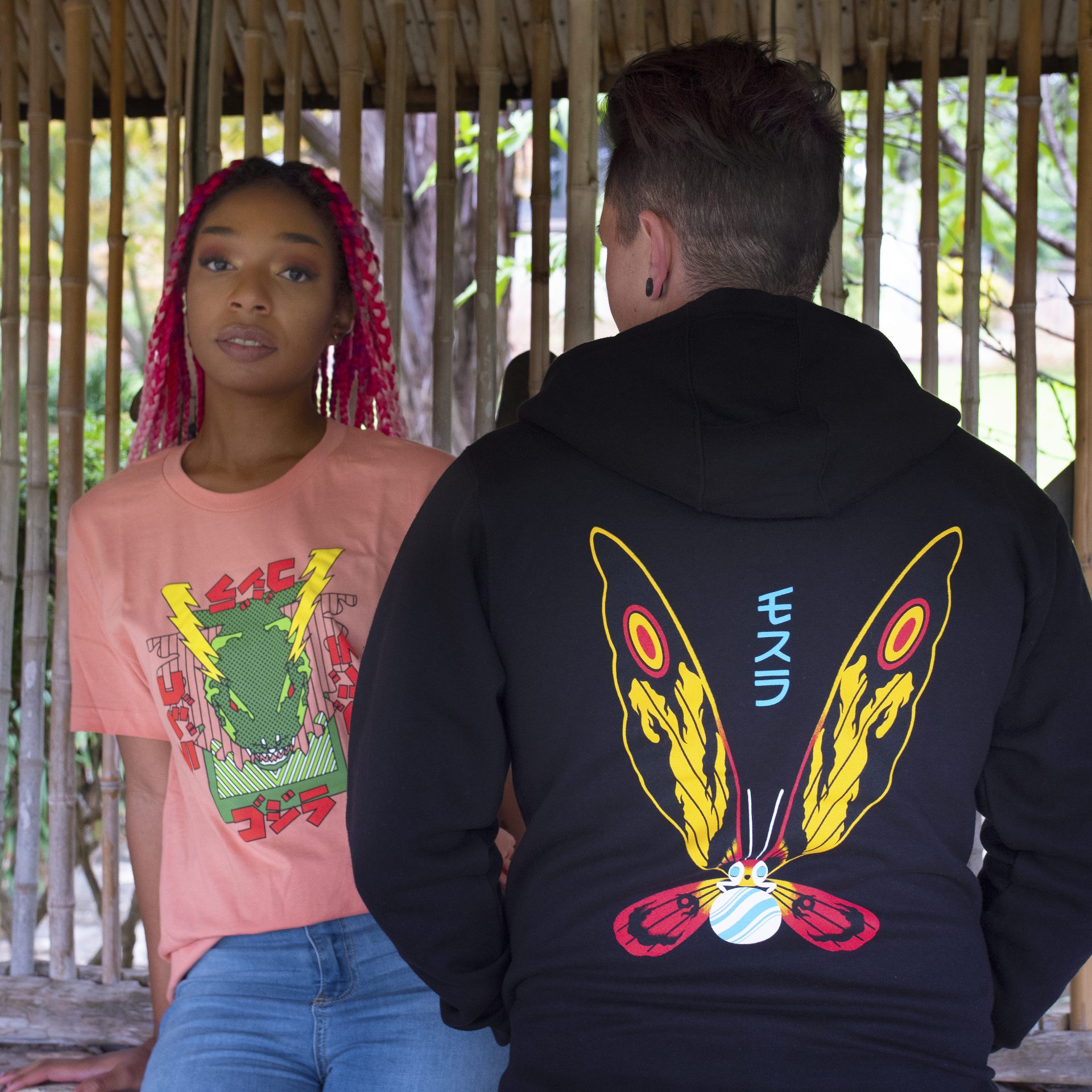 These products are but the first of many new Toho-inspired clothing set to arrive in the coming year. Soon, Mondo will also reveal plans for additional Toho lines, which will include new posters, tiki mugs, and statues featuring the world’s most beloved kaiju. The collection will launch with a very groovy zip-up hoodie by artist Maggie Chiang, along with a long-sleeve tee by Matt Taylor, as well as t-shirts featuring art by Becky Cloonan. All shirts will begin shipping from Mondo in December 2019. So be ready for a very Kaiju Christmas! 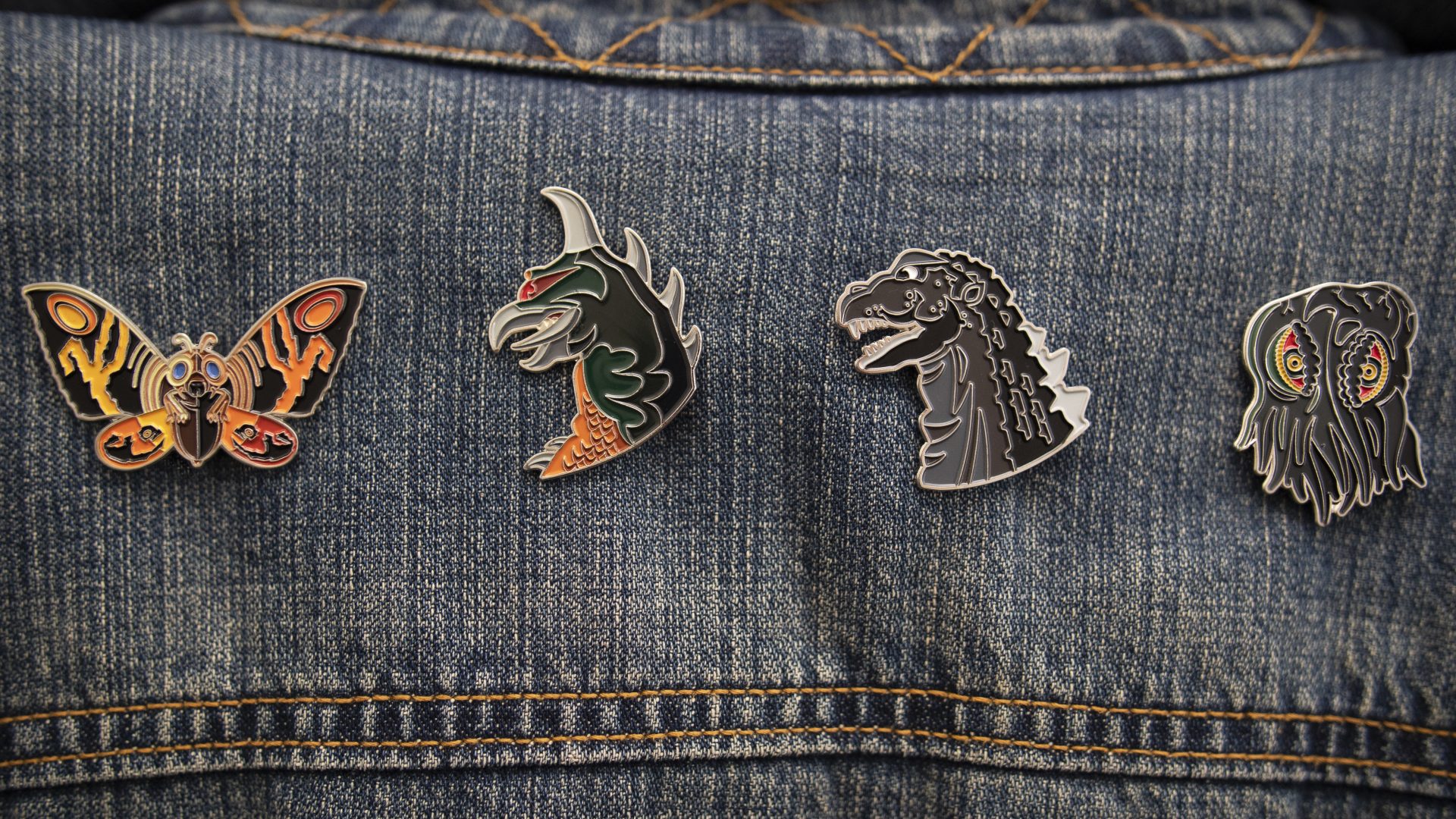 Completing this first new batch of cool new Toho items will be the first four in a series of Toho Monster pins by Tom Whalen. In a statement, Whalen said the following about his being able to create new art featuring the Toho monsters:

“‘What’s one property that you haven’t worked with yet, but you desperately want to?’ No question has surfaced more consistently at speaking engagements, convention appearances, and podcasts that I’ve been a part of. And my answer has always been the same: ‘Toho monsters.’ These fantastic creatures have entertained, inspired, and delighted me since childhood, and my love for them continues to this day. I’m ecstatic the Mondo has partnered with Toho and opened up a sandbox that I’ve long wanted to play in.” 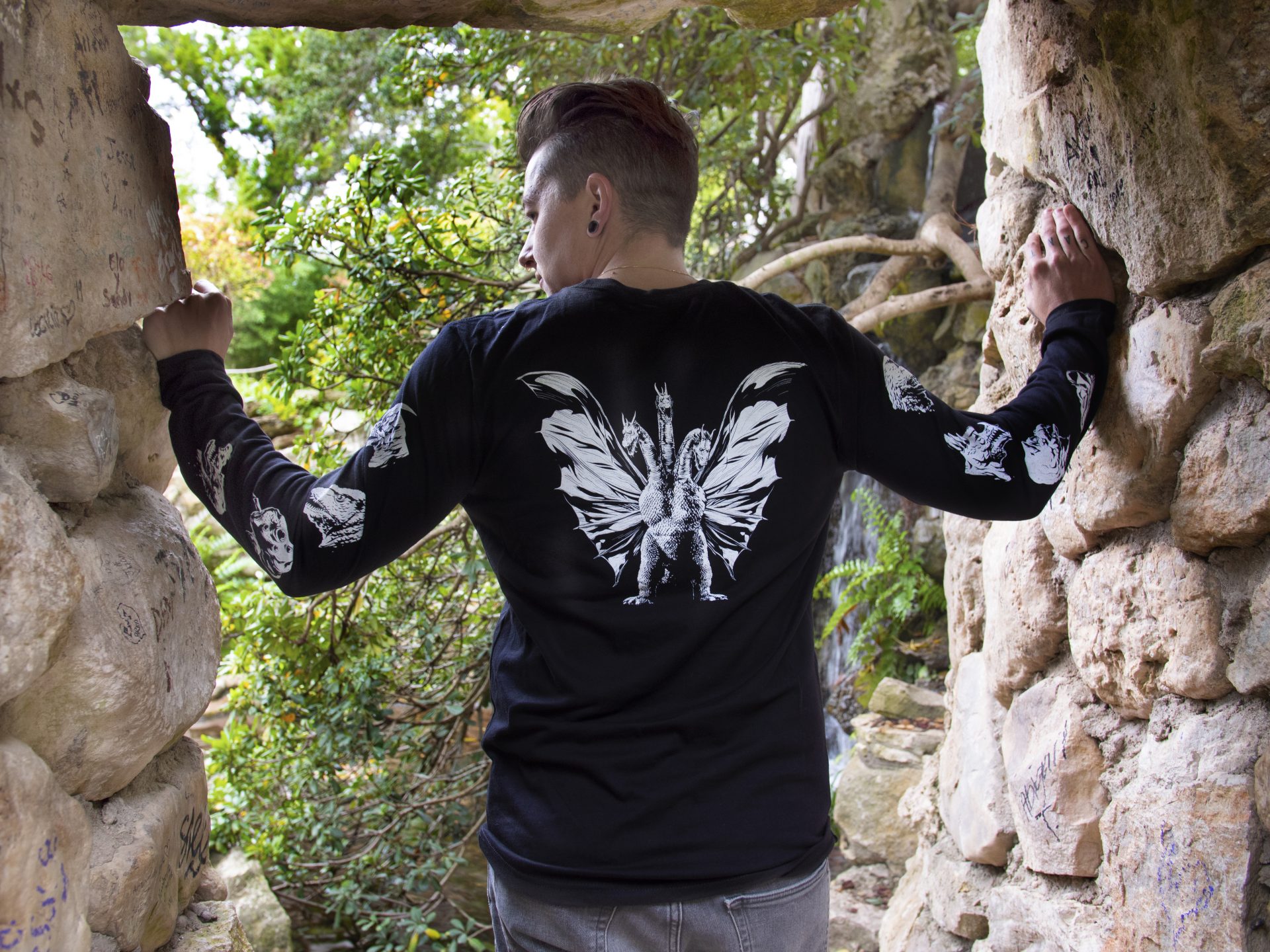 In a statement from Chris Mowry, the Toho brand manager had this to say about the exciting new line of products: “What better way for Godzilla to celebrate 65 years of cinematic and pop culture history than to partner with the team at Mondo? Like the Godzilla brand itself, Mondo has something for everyone, and there are some exciting new products on the way that are sure to please both the new fans as well as the hardcore collectors out there.” 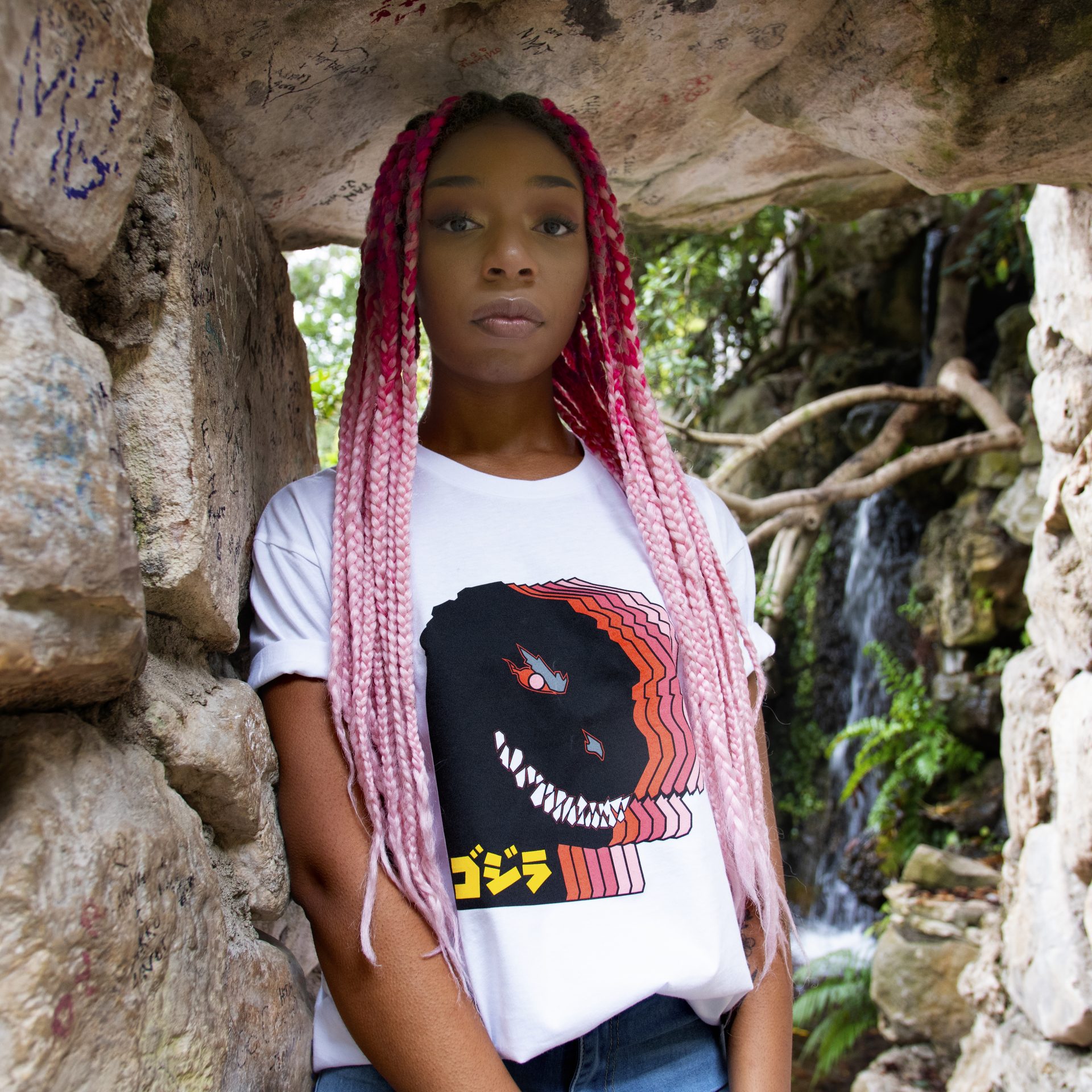 With a new Godzilla box set from Criterion, and Kong vs. Godzilla coming next year to theaters, there has never been a better time to wear your kaiju merch with pride! The new collection will launch on Thursday, November 14.