Our solar system is just one unthinkably massive gift that keeps on giving, right? The Sun protects our planet from interstellar plasma with its solar winds, Jupiter draws in potentially dangerous rogue asteroids, and there’s even water on Mars, which we may be able to drink one day. And while that’s all obviously awesome, we may soon be privy to a look at one of the solar system’s more tangibly valuable gifts, an asteroid made up almost entirely of metals worth, according to Bloomberg, $700 quintillion. Asterisk that value though, because we’ll mention a couple of caveats, which may or may not be the caveats you’re probably thinking of already.

It’s many billion times more valuable than all of the money in the world today. pic.twitter.com/ShIJseLmvb

If you haven’t heard of this immensely valuable massive asteroid, dubbed 16 Psyche, get ready to soon refer to it as my precious, because its highlight factoids really make it stand out as something special. With an average diameter of 140 miles—roughly the distance from Los Angeles to San Diego—16 Psyche is one of the ten most massive asteroids in the solar system, and an unbelievable 95% of that mass is made up of metals like iron and nickel, as well as, possibly, gold and platinum. As mentioned, Bloomberg has noted that the asteroid would be worth $700 quintillion if it could ever somehow be brought down to Earth, which would mean enough money to give $93 billion to every single person currently on Earth. But again, big asterisks on that number. 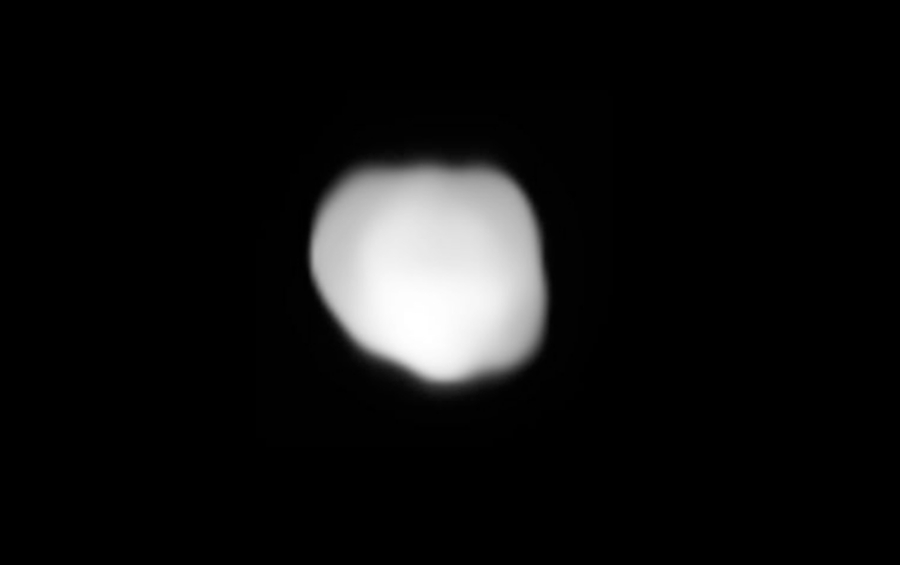 A real-life look at 16 Psyche. ESO/LAM

From a research standpoint, the most exciting aspect of 16 Psyche is probably the fact that it’s likely to be the unsheathed metal core of a former protoplanet. If that is indeed the case, that would mean two things: one, that we’d get the chance to explore a planet core for the first time ever and, two, we’d learn a lot more about Earth’s core in the process.

In terms of figuring out whether 16 Psyche is indeed a former protoplanet’s core, and if so, how it lost its rocky mantle and crusts, that literal mission has been tossed to a team over at NASA (thank Hubble). The Psyche mission, discussed in the clip below, aims to send a probe to 16 Psyche, leaving Earth in 2022 and arriving in 2026—the transit time will take years because its about 244,128,585 miles from Earth.

Now for the caveats regarding the asteroid’s value. First of all, mining a metal asteroid that’s flinging around in the asteroid belt, a few hundred million miles away from Earth, would be anything but easy. In fact if 16 Psyche proves anything it’s that some things in space are extremely hard (sorry we had to pun it up there). On top of the difficulty of retrieving 16 Psyche to bring back to Earth, there’s also the issue of how market economics work. If there were suddenly tons more of any valuable metal here on Earth, would said metal still be worth as much? Probably not. But developing a better understanding of how planetary cores work, especially by seeing one up close and personal, that’s priceless.

What do you think of 16 Psyche and its potential to make you a billionaire? Do you think retrieving an asteroid like this could greatly benefit humanity, or is retrieval so difficult to execute, it shouldn’t even be attempted? Give us your ultra-valuable thoughts in the comments!