Mech Command RTS is a different kind of game. This honkin’ box of wonderful bits from Bad Crow Games is a real-time strategy title. But it’s not one of furious mouse clicking or continually slapping build shortcut keys, instead it’s one of plastic mechs dancing across a surface of cardboard and blowing each other apart. It’s analog carnage, pure and simple. 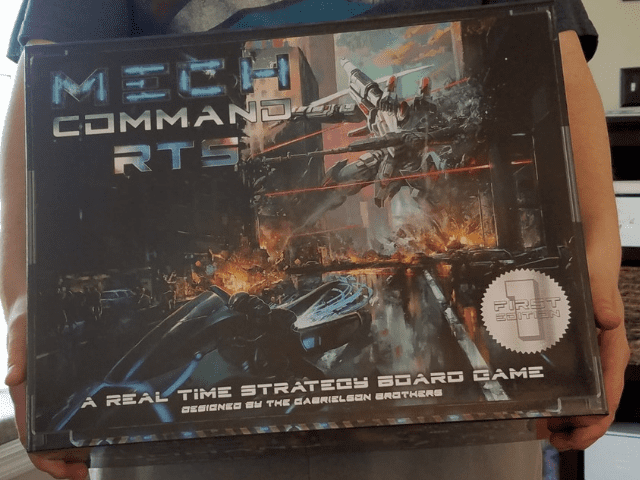 After you’ve opened this enormous Gloomhaven-sized box and ogled the myriad pieces, you’re likely going to run into a bit of a hurdle. Mech Command is not a typical miniatures board game. The structure of rounds is very unique and it’s very easy to slip up and make mistakes. There’s a bit of a learning curve is what I’m trying to say.

The designers are not blind to this issue. The rulebook walks you through your first game having the table perform actions together and experiment with options. The trick here, and what makes this game so fundamentally different than the norm, is that play occurs simultaneously in real-time.

So while I’m picking up my mech and moving it one hex at a time, you’re likewise stomping around on the opposite end of the board. Each action requires spending energy. This includes moving, shooting, boosting, and even shielding yourself from enemy attacks. This constant flow of energy from your available pool to different cards that form your mechs arsenal is the constant upkeep of the game.

The process of alternating between off-board upkeep and acting with your miniature on the board emphasizes the game’s penchant for fiddliness. It’s the weakest aspect of the design and one that’s intrinsically linked to its real-time nature. You’ll have moments where you forget to move the right cubes or pay for an action and you’ll need to correct. Sometimes you will call out a hit on an opponent just as they’re moving out of sight and you will need to make a judgment call. Other times you will realize a player violated one of the scenario rules a turn prior and everyone will need to figure out how to unwind the mistake.

It can be outright messy.

If you stick with the game, these issues will fade away to a degree. Familiarity and repetition go a long way to internalizing the unique systems and the game is actually somewhat simple for its scope. 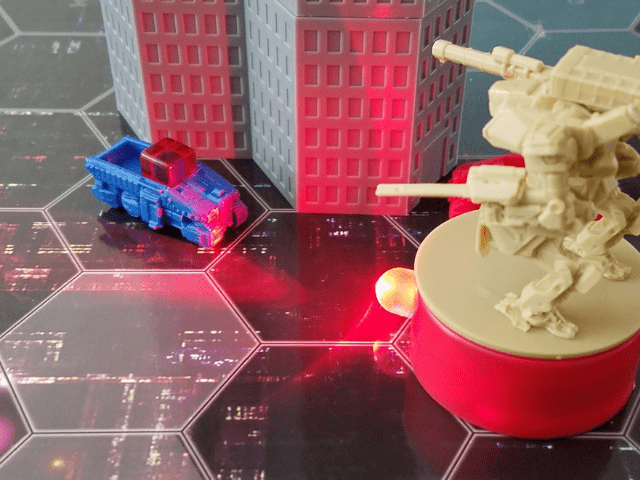 The real-time action phase is also intensely clever. Everyone’s operating simultaneously but a sand-timer is off to the side ticking away. You have two minutes–which is actually incredibly generous for the amount of actions you will take–and can move as fast or as slow as you’d like. Sometimes you will take your time, watching opponents act before committing. Other times you will rush to boost over a skyscraper and land behind a target so that you can knife them with your energy blade before they can get away. The pace is always fast but it captures its own jittery rhythm of ups and downs.

Combat occurs in a team structure of 2v2 with the core set. You do have the option to control two mechs a piece for a one-on-one setup, but the full glory of the game is realized with social team-work and the frantic dashing about to accomplish objectives.

Your goals are dictated by the scenario and are quite varied. The ideal format is a linked campaign as the box leads you through a winding story of futuristic war and desperate gambit. You will unlock new mechs and weapons over the course of 10 missions, fueling secondary objectives that are specific to long-term play.

The game also supports one-off skirmishes as you can simply agree upon which mech chassis’ to use and which loadouts are allowed. There are a ton of gear options with weapons offering all sorts of varied cool-downs and energy management quirks. 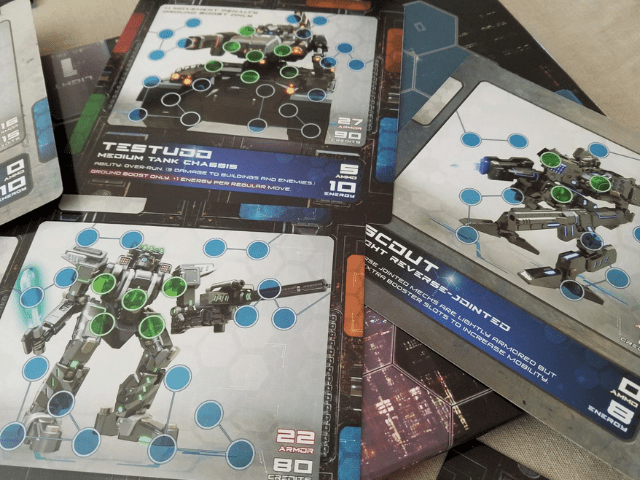 While the scenarios are extremely varied, the quality does hit a little uneven. There is one profile-type that seems to reoccur at different intervals, which includes players basically collecting items and bringing them back to base. The first mission features this as you’re running around attempting to retrieve material and return it to base. These types of missions get away from what Mech Command does best – robot on robot carnage.

Another example is scenario three which asks participants to wreck buildings and retrieve salvage. This starts off with an impression of excellence. Who doesn’t want to run a tank mech and demolish huge plastic skyscrapers with wanton energy blasts? The problem is that each team is incentivized to stay on their side of the board and farm wreckage without engaging the enemy. Truth be told, the most optimal play is probably having one of your mechs attempt to disrupt the non-mech support units of your opponent and stall their scavenging, but there is almost no reason to actually engage other mechs.

The game is at its absolute best when players are fighting king of the hill style over central objectives. When the scenarios lean into this and you’re able to fully sample the various loadouts and upgrades, it can release wonderful moments of delicious tension and high stakes violence. 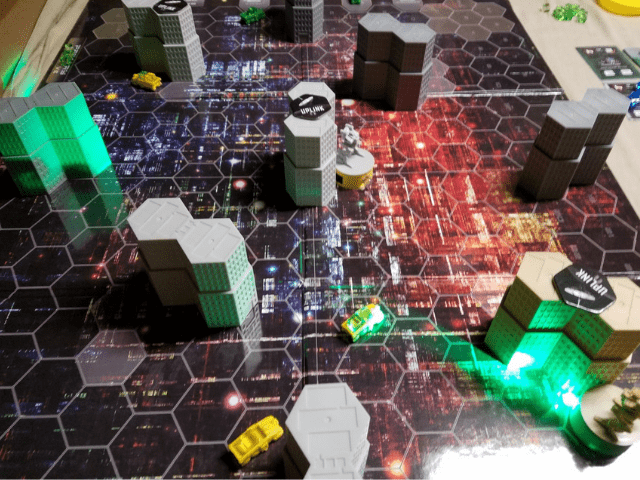 Beyond the scenarios and flow of play, there are a number of flourishes that really fire up the core. In addition to those plastic buildings and huge board, we have a large number of mech miniatures of different types, each with open slots on their joints so that you can temporarily equip various armaments. These don’t all stay in the joints very well and you’ll need to use something like blu-tac or rubber cement to keep them locked in.

The mechs themselves also magnetically connect to a large LED light functioning as the base. This light offers a really slick way of determining line of sight on the fly. It’s as simple as shining the emitted laser at your opponent and eyeballing the cascading waves of light. If you can see your red shade on the opponent then you can fire away and light ’em up. This works exceedingly well and is a magnificent tool to facilitate the game’s fast play.

It’s also necessary to highlight that the real-time structure affords almost no downtime. Since you’re always acting alongside the other players, rarely are you sitting and observing for more than a couple of minutes. Occasionally you will be slaughtered and have to sit out a couple of rounds to respawn, but the experience is so rapid and airy that it’s of little bother.

There’s a lot going on here. Mech Command RTS is a really unique endeavor and the type of quirky yet flawed game that really grabs my heart. It targets a very specific audience, one that can totally get behind the concept and not worry about the wiggle room. If you’re up for this particular slice of mechanized life, then you will find yourself greeted by a game of enormous potential and breakneck carnage.