Who Is Uatu, the Mysterious Watcher of Marvel's WHAT IF...? - Nerdist

Who Is Uatu, the Mysterious Watcher of Marvel’s WHAT IF…?

Just like the Marvel Comics of the same name, Uatu the Watcher will be overseeing the happenings within the Multiverse on What If…? on Disney+. But just who is this giant, chrome-domed alien in the Roman toga? And does he really only watch things and pontificate about them? Well….not so much. For someone named “the Watcher,” he’s done a whole lot more than just look at things very intently. Before actor Jeffrey Wright brings the character to life in animated form, here’s everything you need to know about the ancient being known as the Watcher.

The History of the Watchers 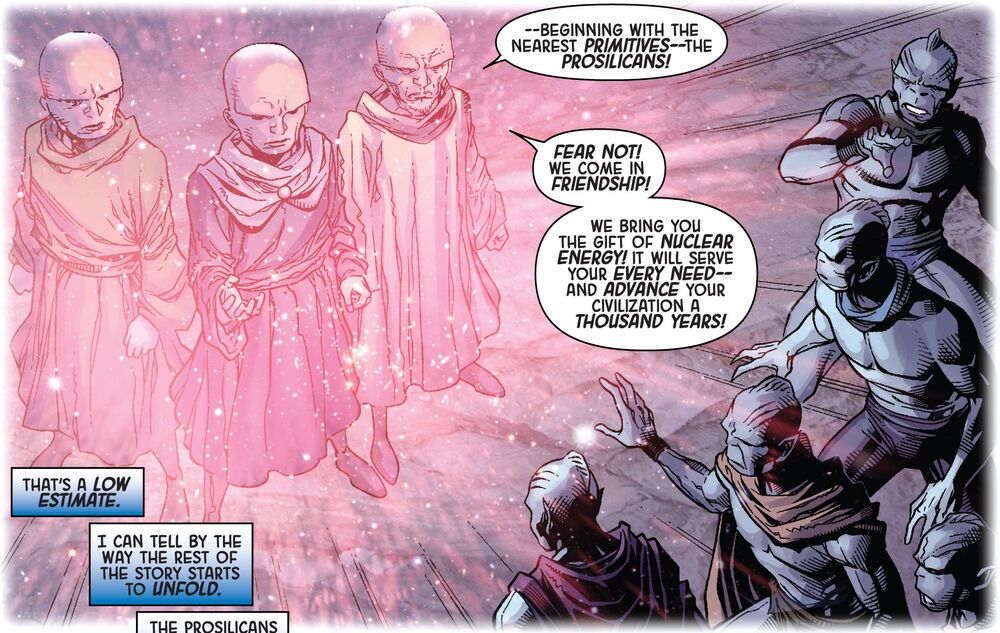 Uatu comes from a race called the Watchers, which is why he is simply referred to as “the Watcher” by many. His species is one of the most ancient and also most advanced races in the cosmos. They each have massive psionic powers. They have the gifts of flight, telepathy, energy-manipulation powers,  illusion casting, and more, In fact, they were one of the first technologically advanced beings to evolve in the universe. Altruistically, billions of years ago they chose to spread their knowledge to benefit the less evolved worlds of the universe. But that plan wound up backfiring spectacularly.

This ancient race’s first try at sharing advanced tech with a less developed species occurred on the planet Prosilicus. Among the advancements they shared, they gave them nuclear technology. Eventually, this race destroyed itself in a nuclear war. The species who would become the Watchers blamed themselves for this genocide, and made a vow to never interfere in the natural development of a less advanced race. (This is similar to Star Trek’s Prime Directive). From that day forward, they would only passively observe and record events. They became the Watchers, and served in this capacity for eons. 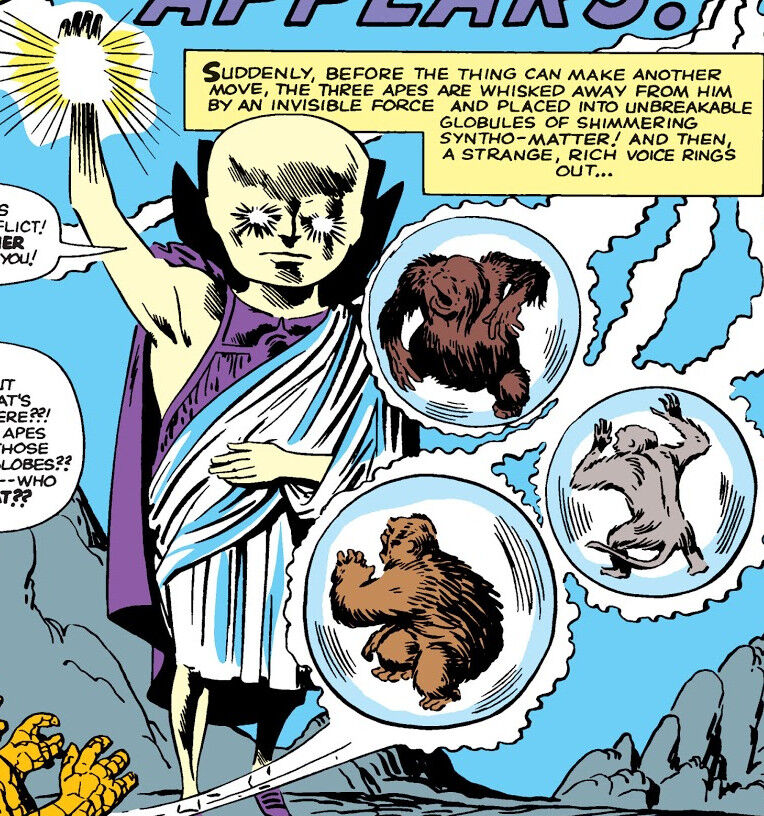 Uatu was one of those Watchers, and he also was part of the disaster on Prosilicus. Assigned to Earth, he stood vigil for centuries on the so-called “ Blue Area” on the Moon. This was a part of Earth’s satellite made habitable by advanced aliens. But when the phenomenon of superhumans began to occur on Terra, Uatu felt compelled to interfere. He felt a kinship with this new breed of human. Uatu helped the Fantastic Four when the heroic quartet battled the villainous Red Ghost and his Super Apes on the Moon, near his home. This occurred in his first appearance, 1963’s Fantastic Four #13. 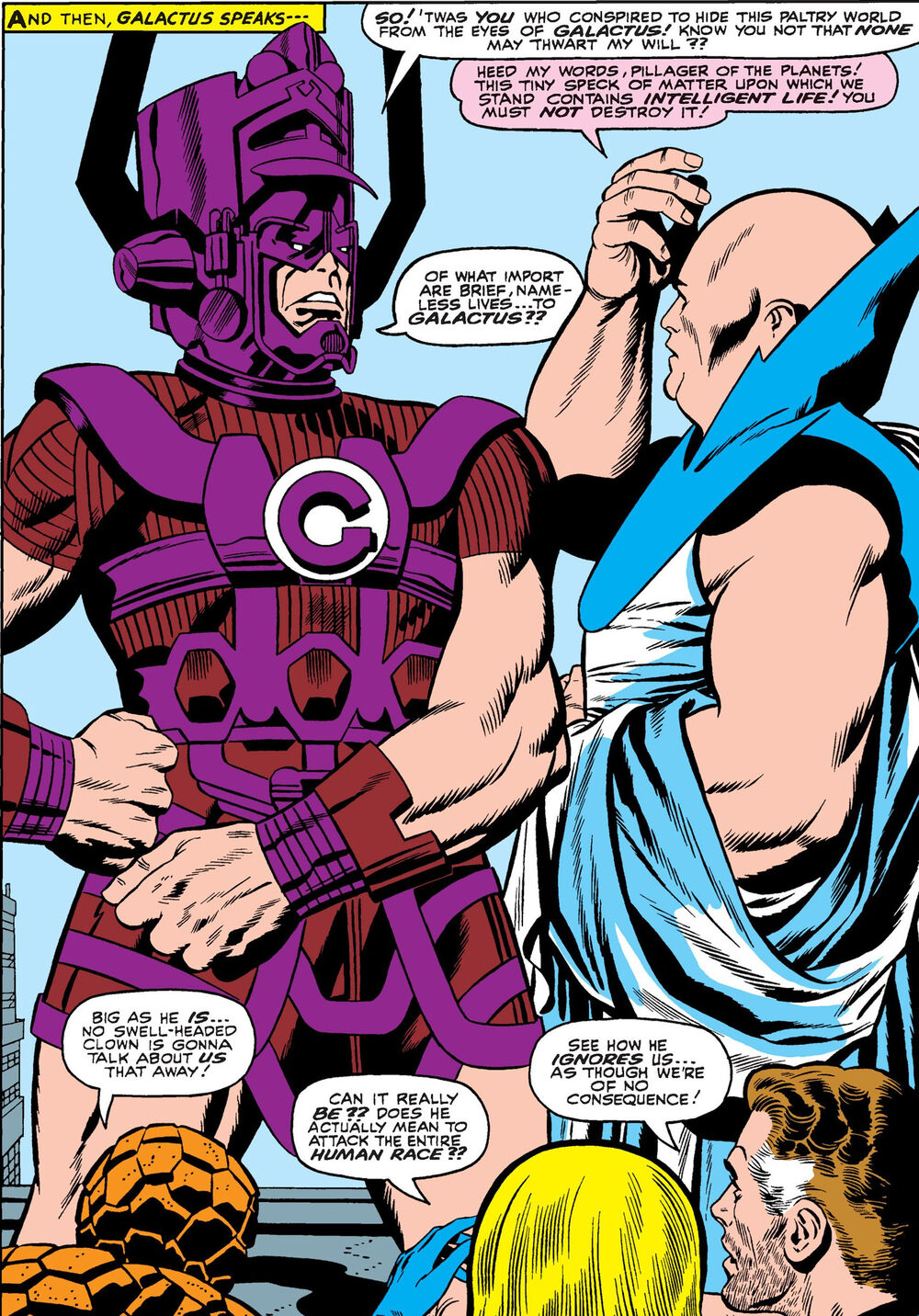 By helping the FF, this became the first time he would break his vow. It wouldn’t be the last. He even interfered when villains chose to attack Reed Richards’ and Susan Storm’s wedding. And he let them honeymoon in his fortress on the Moon! But the biggest hand he ever gave humanity was when Galactus came to devour the Earth. He essentially gave Johnny Storm the keys to the secret weapon which was the only thing in the known universe that could render Galactus defeated. Without his interference, Earth would have been lunch for the Devourer of Worlds.

A Silent Observer (Most of the Time) 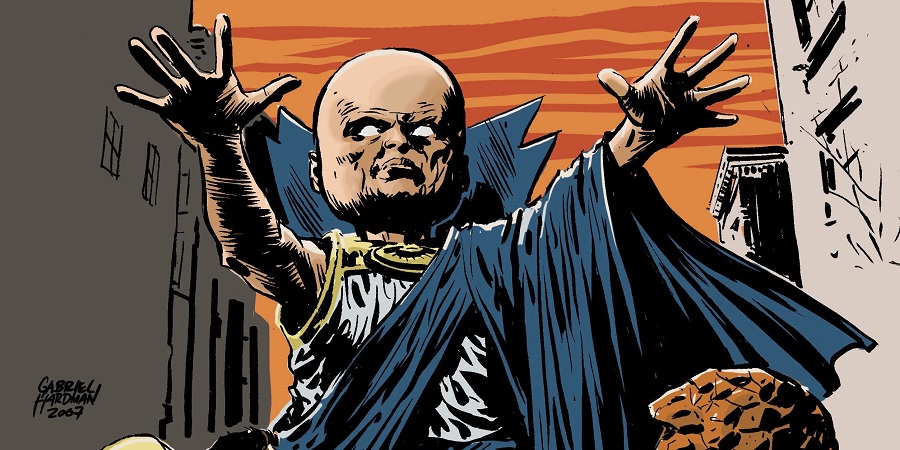 From there on out, it was a meddling free for all. He observed, and then interfered, with the actions of the Avengers, the Hulk, Captain Marvel, the Silver Surfer, and pretty much every Marvel hero you’ve heard of. He also stood watch and observed the various alternate realities Earth’s heroes lived in the Multiverse. This occurred in the What If…? series, where Uatu functioned as narrator. Yes, he often just stood by and did not interfere. But he meddled just enough, and was eventually brought to trial for breaking the rules by his own people. 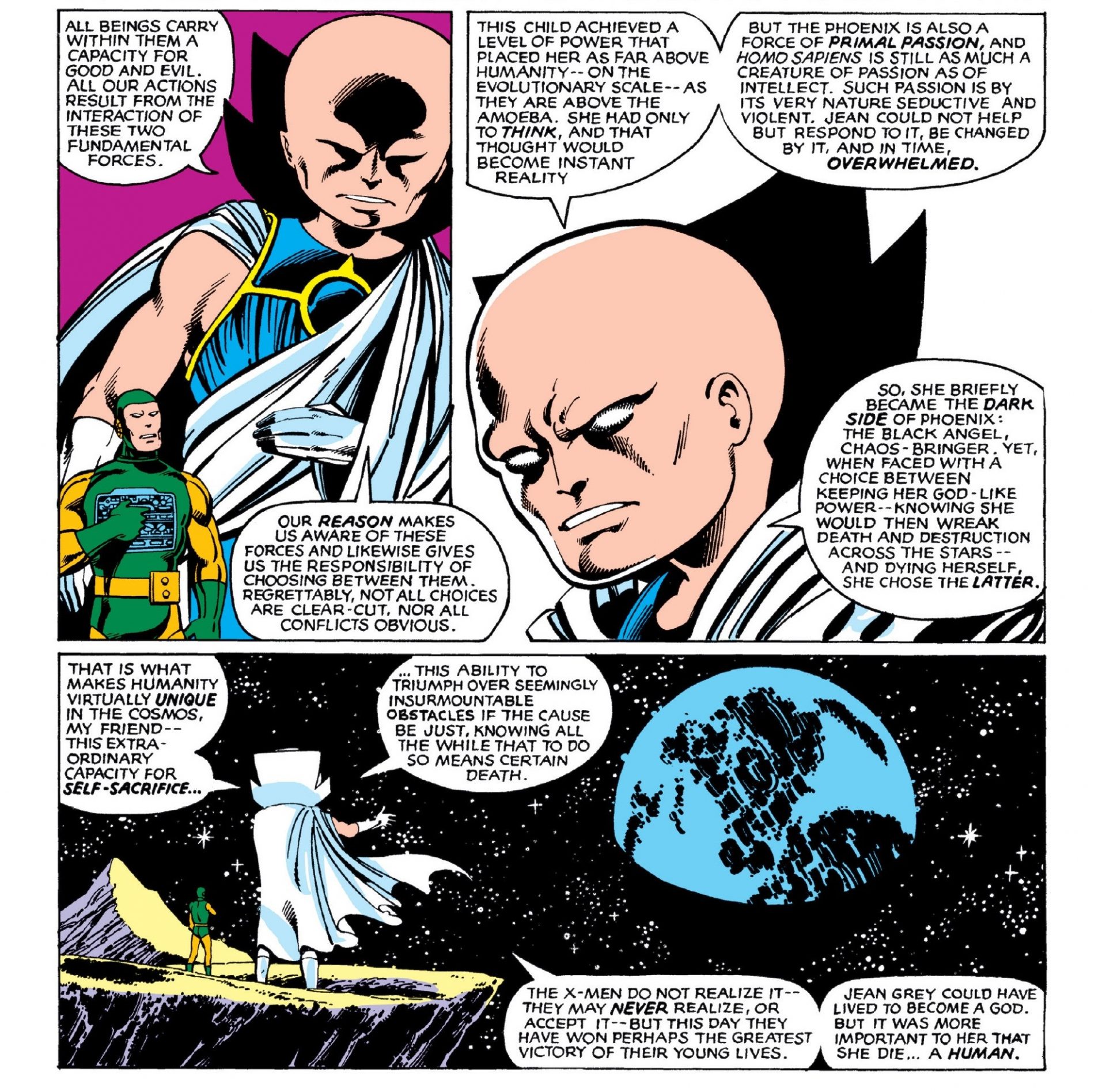 The Watchers found Uatu guilty, and sentence him to exile. Although ultimately, they did reinstate him. He stuck to the Watcher’s strict code for some time after that, appearing silently in major Marvel events. Uatu was there when Jean Grey died in The Dark Phoenix Saga. And he stood watch recording the events of Civil War, Secret Invasion, and Avengers vs. X-Men. For the most part, he chooses not to meddle. In fact, his nephew Aron, the “Rogue Watcher,” winds up being a far bigger menace than Uatu ever could be. At least Uatu never interfered with malicious intent. 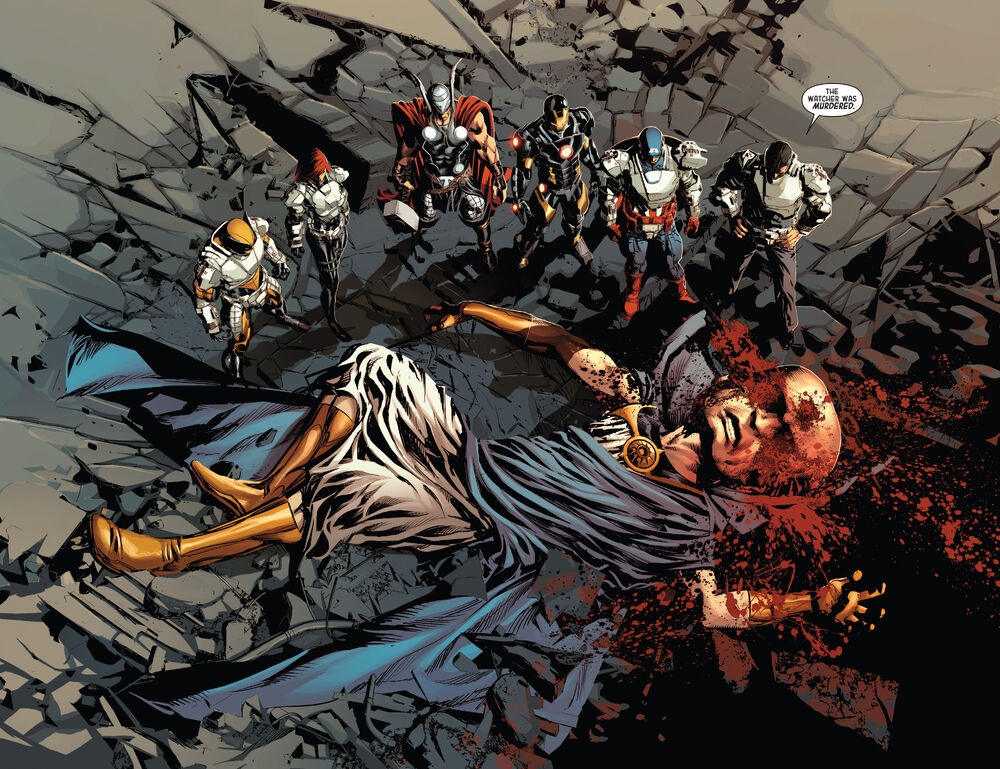 In recent years, Uatu once again caused ripples in the Marvel Universe. But this time, it was due to the mystery surrounding his murder. The heroes of Earth found Uatu’s corpse on the Moon, and had to solve the mystery of who killed him. This took place in the 2014 crossover event, Original Sin. Turns out, the culprit was none other than the longtime hero, Nick Fury. Hostile aliens attacked the Watcher’s fortress, injuring him and stealing one of his all-seeing eyes.

Nick Fury found him dying, and he killed him to take his other eye. All in order to stop the aliens from succeeding in their plans against Earth. When the culprit is shown to be none other than Fury, the other Watchers gave him the task of observing Earth in Uatu’s place. Fury became “ the Unseen.” Of course, in recent years, Uatu has come back to life. Cosmic Marvel characters rarely stay dead. What the future holds for Uatu the Watcher is a mystery. All we know is that he’ll always have his eye fixed on Earth. And when things are truly dire, he’ll break his sacred oath and step in.

TAGGED: Marvel Comics, The Watcher, Uatu, What if