Earth’s Mightiest Heroes are facing their most challenging foe yet: the capricious whims of gamers. Revealed at long last at this year’s E3, Square Enix and Crystal Dynamics’ Marvel’s Avengers was met with raised eyebrows galore thanks in part to its Marvel Cinematic Universe-lite aesthetic. But while kneejerk responses are the name of the game during E3 press conferences, that trailer only scratched the surface of what fans will experience when the game comes out next year.

During a behind-closed-doors demo at E3, I saw a much more in-depth look at how the game will actually play in context of the massive single-player story mode. The demo took us on a wild chase across the Golden Gate Bridge in San Francisco as prelude to the events of A-Day, the ominous name given to a celebration of Earth’s Mightiest Heroes gone awry. While the level we saw them playing was admittedly more linear in nature than others that will be in the game, it gave us a taste of what each hero is capable of.

As Thor, you pack a major punch, using your thunder god powers and your mighty hammer Mjolnir to pummel your opponents. Playing as Iron Man gives you an incredible sense of agility and verticality that isn’t present in other heroes, and one particular segment reminded me of StarFox 64 in a good way. During Hulk’s time in the spotlight, he did what he does best: smash. If you want to feel raw power, Hulk is your guy, plain and simple. We also saw Black Widow tussling with Taskmaster, which required a combination of deploying gadgets, dexterous dodging, and expertly timed melee strikes in order to take down the evildoer with an eidetic memory. Last, but not least, Cap plays like the towering beefcastle that he is, absorbing blows like they’re nothing and hurling his shield like a pro snooker player banking shots from impossible angles.

To find out what we can look forward to from the final game, I sat down with lead producer Rose Hunt and lead designer Philippe Therien to chat about stylistic influences, fan response, and much more.

Editor’s note: This interview has been edited for brevity and clarity.

Nerdist: Tell me a little bit about how this project first came about, and how you decided to go with this iteration of the Avengers.

Rose Hunt: Several years ago we wanted to work with new IP. We went looking like, “Hey, who wants a partnership?” And we got lucky that Marvel was looking for a studio at the same time. And it was really a marriage made in heaven, right? We’ve been collaborating for years on this. From the beginning, we wanted to create our own original story. That worked out with us, because we have characters that are both superheroic and grounded. We’re called on some of the best acting talent in the industry to do that for us.

Philippe Therien: We’re taking everything that we’ve learned from the Tomb Raider games, and we’ve added a lot of talents to studio because we really wanted to make this really cool hybrid game. With the Avengers, it’s such an amazing canvas because they are awesome as a team, but they can also be very strong by themselves. There’s really interesting stories to tell when they’re by themselves. And certainly you’ve seen that a little bit in the demo that we have today, which is one of our very directed linear levels. But you also have bigger, open-ended, co-op levels so you can play both. And what we call co-op, you can play by yourself as well. If you choose to play by yourself, concentrate on one hero or many, it’s your choice. 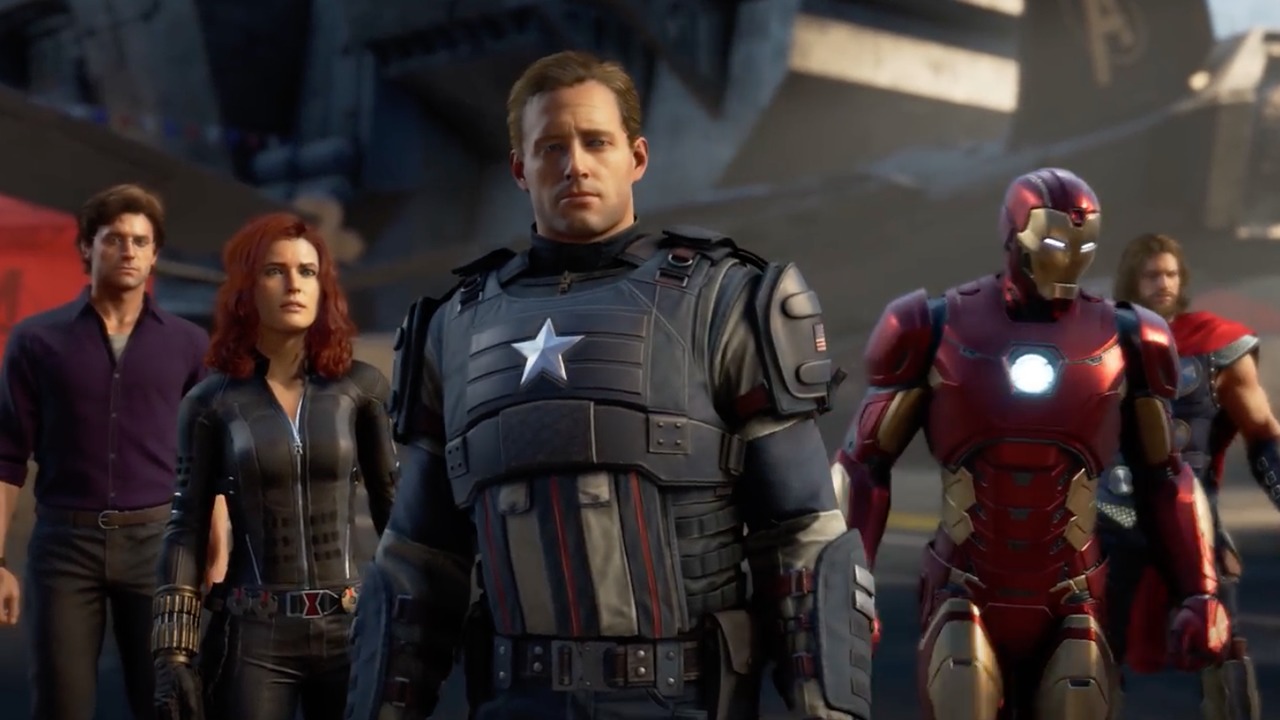 Nerdist: With something like this, it’s a more linear level experience. You’re in the thick of it, you’re running down this bridge as it’s being destroyed. Are a lot of the single-player levels similar to this?

Rose Hunt: This is one of our more cinematic moments. We call this one of our “Oh My Stars levels.” You’re doing these amazing thing in a cinematic experience. Not all of our campaign levels are going to be like this. Some are very much like our other Tomb Raider levels, where you get to explore and you get to branch out. There’s a lot of a traversal, and there’s a lot of singular game play there.

What you saw today is that the Avengers were unveiling a new location in San Francisco, and they have their very own helicarrier, equipped with a new technology. Then terrible things happen, and that helicarrier crashes into the bay with Captain America on board. We pick the story up five years later, and the Avengers have been blamed for that terrible tragedy. They’ve been disbanded and outlawed, but they have to be reassembled because is a great threat facing the world that only they can conquer.

Nerdist: In terms of comic book source material, did you folks look to storylines like Avengers Disassembled as reference points?

Philippe Therien: We have the benefit of fishing from 80 years of Marvel DNA, and collaborating with the amazing guys with Marvel. I would say that because we’re making our very own Avengers game, a lot of what you’re going to see is new, and it’ll feel very familiar. It might even reference things that are from the past. We’re that kind of game, where just like you love all things Marvel, small details. Sometimes they can mean really big things. So I encourage people to look at license plates, street signs, names of missions, people you talk to–you never know what you’re going to find. 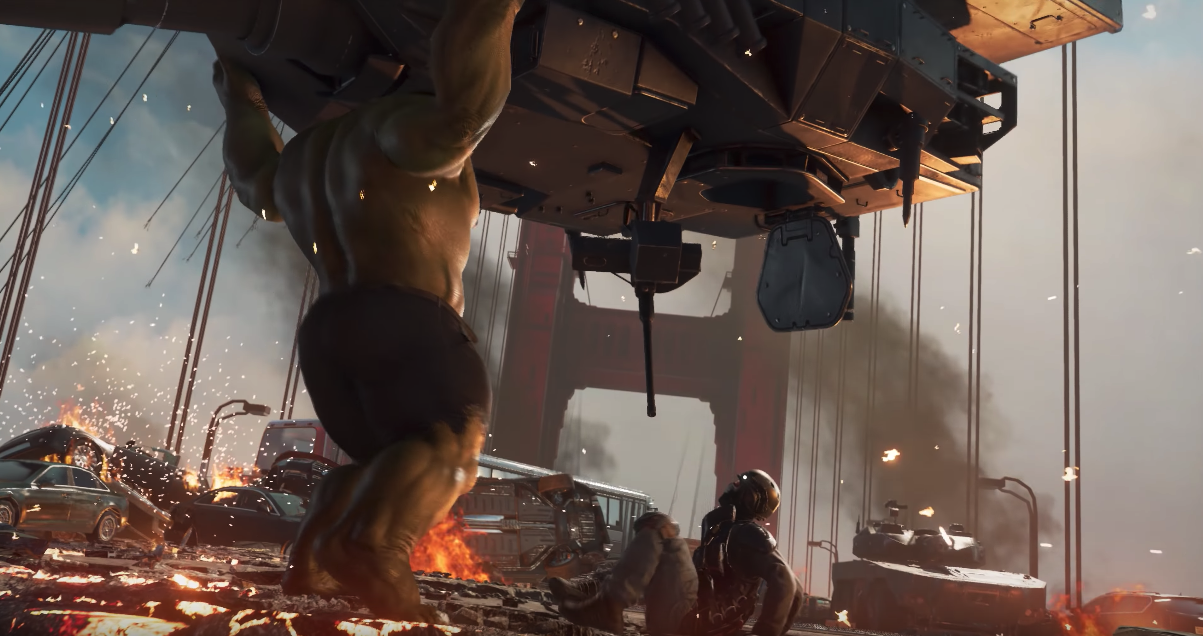 Nerdist: This is definitely a more grounded version of the Avengers. What motivated the decision to pursue this sort of art style?

Philippe Therien: I think it’s a mix. We’re definitely good at doing very solid grounded experiences, but we wanted to have also something that has an amazing amount of spectacle. So when you have Thor rising up in the air, unleashing lightning, that’s extremely satisfying. To me it feels like what I’ve seen in the movies, which I’m super happy about. It’s grounded, but also it has that flashiness that you expect from the comics, which I think the movies got better at later on. We’re finding our own balance between those things and it should all feel exactly the way that people expect the characters to be. So that amount of spectacle that we have in the game is really so that when you’re playing the Avengers, they look exactly the way you’d expect them to. And that certainly requires a good amount of spectacle.

Rose Hunt: It was important to us in creating these characters, that people feel like they’re living out their superhero dreams, and they really get the sense of awe, I’m powerful. I’m the superhero.

Nerdist: Which character was the hardest to crack in terms of making them feel satisfying to play?

Philippe Therien: The challenge was all of them. Because fundamentally you’re looking at a set of characters where you’ve got humans with amazing abilities, you have Hulk, who’s apparently indestructible, and you’ve got gods. You put those people together and you go, “Well, how do you make an experience that fits together?” You could make a game for every single one of those characters, and you could do great by just doing that.

So there’s a couple of choices. One could have been to mathematically balance everybody, and just keep them in line. But that doesn’t feel like what you would expect. You want Hulk to take a lot more damage than everyone else, you want Iron Man to fly as long as you want. We made a game where the environments and enemies create situations where they have a chance to shine. There’s always a specific situation where somebody can do something amazing. 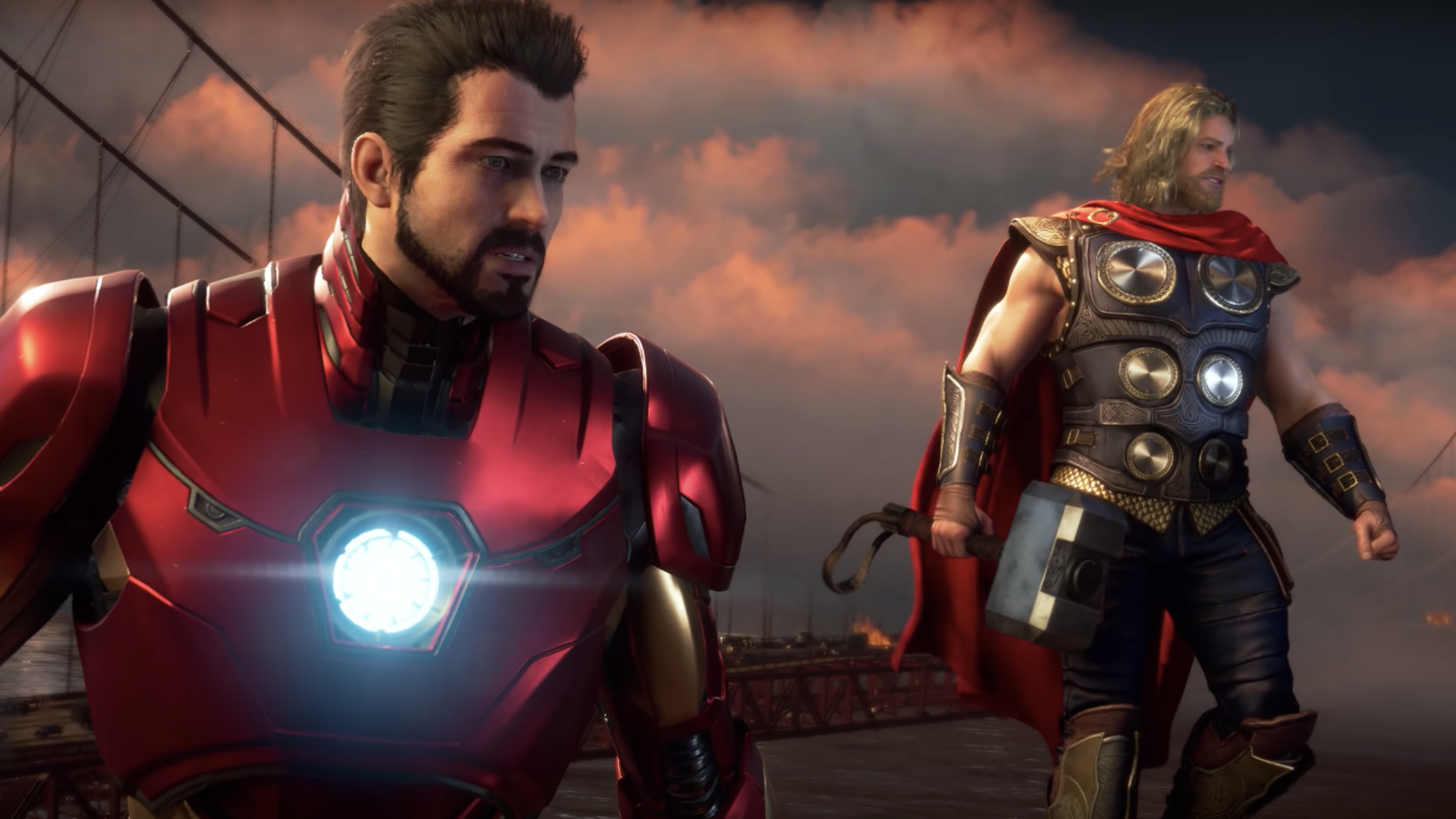 If you’ve got Iron Man flying in the air, he’s using repulsors, engaging flying enemies, Hulk is on the ground, just pounding everything into dust. He’s got everybody’s attention on them. Something goes wrong, Iron Man goes down, Hulk picks up this giant boulder, throws that at the flying enemies, brings them down. Iron Man starts to engage in melee. And that just created a scenario where, at a very specific point, this might have been us playing together. I might’ve said, “Hey, I need your help.” That’s how we make the heroes shine.

Black Widow can kick as much ass as Thor. She just does it in a different way. All the superheroes can wreck house. So Black Widow, she might avoid damage by being very agile. Hulk just takes a lot of damage. Because they have different superpowers and abilities, and skills and gear on top of that, you have this amazing ecosystem where the way you play a character just creates those moments where you’re going to go, “This is my time to shine.”

Nerdist: Are there plans for any stealth segments with a character like Black Widow?

Rose Hunt: Oh, we can’t go into that right now.

Nerdist: Okay. I can’t blame you for asking.

Philippe Therien: Well, I’ll tell you this much. There’s plenty of opportunities for Widow to use her very specific skill

Nerdist: How will the co-op experience compare to what we saw in the single-player demo?

Philippe Therien: Single-player tends to be very directed, so it very much focuses on either one, or many, of The Avengers, because there are specific points in the story where they need to be specific places. Now co-op is a little bit more open, so you’re going to have an objective, you have a mission to accomplish, you’ve picked your team, you’ve decided what you want to do, but then you have choice: Iron Man could be flying ahead exploring. Hulk could be engaging some enemies over here. The world breathes when you go into co-op.

You can also play that in single player, because just about everything in the game, you can play by yourself. We do have some more high-level content where in co-op you might need more players to complete those. I’m sure you’re familiar with those.

Nerdist: Is there any sort of plan in place for how regularly you’ll roll out new characters and post-release content?

Rose Hunt: We want to keep people engaged, so it’s going to be at a regular cadence. We’re not really talking about what the exact schedule is right now, but I think that people are going to be happy with it, it’s going to be pretty even. 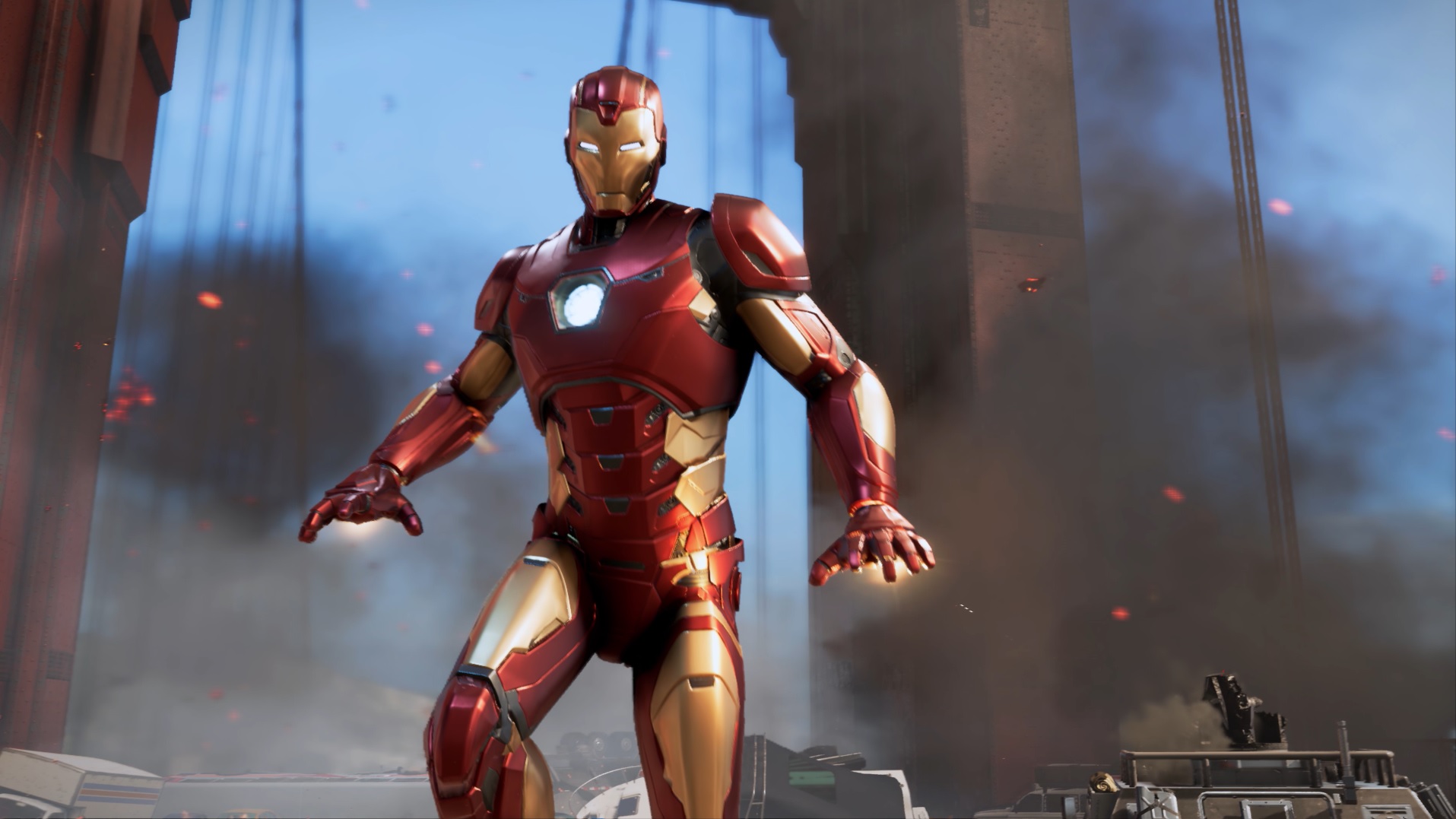 Nerdist: Will these new characters be playable only in co-op or in single-player missions as well?

Philippe Therien: Just like the main game, it’s going to be a mix of both. What’s important to us is that the story keeps going. So when you have The Avengers together, and you’ve come to the logical conclusion that the original game has, we’re going to keep adding to that story. There’s going to be bigger threats that come out, more villains, things that challenge the Avengers. You might still have moments where we’re introducing the new superhero, but then you can go and hang out with the rest of The Avengers. So it’ll be a mix. I think people will be pretty excited.

Rose Hunt: Since we have this central base of operations, you can actually take these new characters, and you can go back and play some old levels you know.