Breaking Down 27 Minutes of THE MANDALORIAN - Nerdist

Breaking Down 27 Minutes of THE MANDALORIAN

Let’s be honest. The Mandalorian is 90% of the reason why anyone has subscribed to Disney+. Launching the streamer alongside the first-ever live-action Star Wars series was a masterstroke, but what can audiences actually expect from the deep space western? Well, at The Mandalorian press junket earlier this month, we got a sneak peek at 27 minutes of footage from the first three episodes of the series. It totally blew us away.

The footage began with the Mandalorian walking across a snowy and barren landscape. It’s a desolate place and the titular bounty hunter checks a device in his hand before heading towards a small building up ahead. Inside the small and busy bar, a fight is brewing as a gang of nefarious men are harassing a blue-faced humanoid alien with gills. The aggressive group of both humanoids and tentacle-faced creatures are clearly enjoying tormenting the poor fellow who seems like he wants anything else than to be stuck in the intergalactic drinking hole. 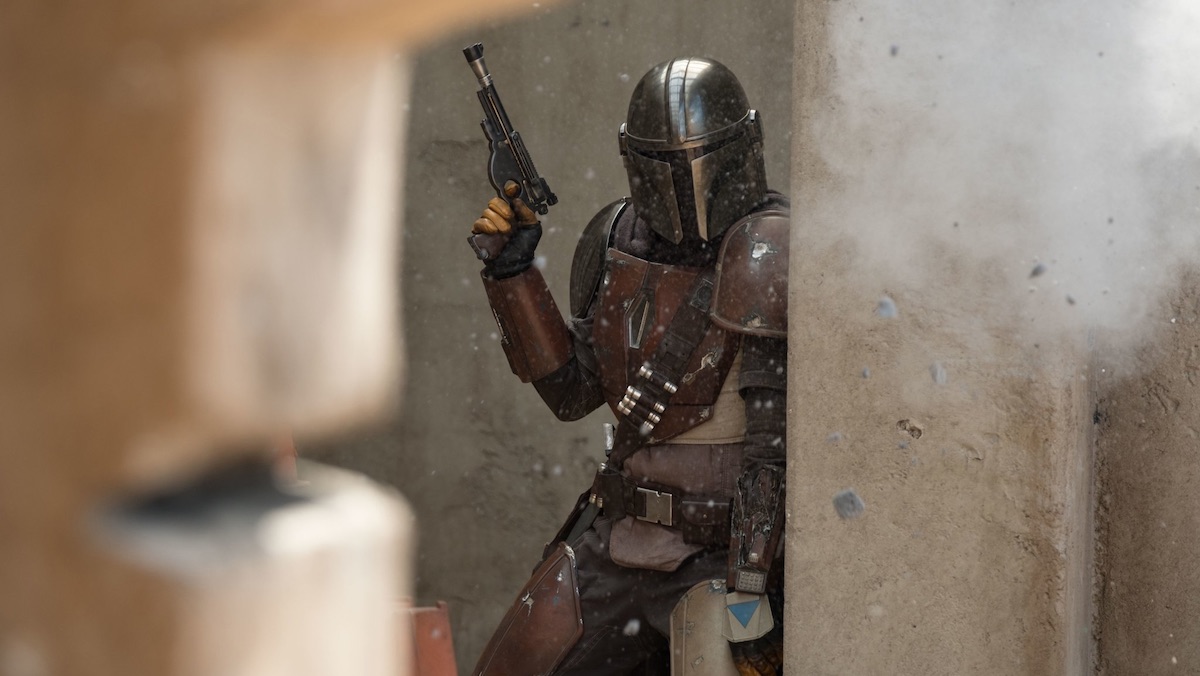 Enter the Mandalorian, storming into the bar like some kind of deep space Lone Ranger. He swiftly bumps into the leader of the rowdy gang who demands that the bounty hunter buy him a drink to replace the one he allegedly knocked out of his hand. Decked out in Bezar steel, the titular hero stays stonily silent. In an attempt to quell a potential riot the bartender slides a drink to the leader of the bar bullies. It unsurprisingly doesn’t assuage the drinker’s anger, though, and before you can say “he’s no good to me dead” all hell has broken loose.

Here’s Everything We Know About The Mandalorian So Far

What we saw here was an extended version of the sequence that impressed so many in the trailer. Trust us, it’s even more impressive in full. Pedro Pascal’s fearsome masked warrior dispatches the entire group in an utterly brutal fashion. The action here feels more decisive and violent than what we’ve seen before in Star Wars, with a precision take on a bar fight that sees the gang completely disarmed and one who tries to run away cut in half by the bar’s automatic door. With his enemies apparently defeated the Mandalorian pulls up a chair to the man he just saved who’s thanking him profusely.

He can’t believe his luck; in his eyes, a true hero just walked through the door and took it upon himself to help a stranger. Of course, things are rarely what they seem and as the masked man slides a disc across the table a hologram of the blue-skinned alien appears. It turns out he’s nothing more than a bounty to be collected. As he tries to bargain for his freedom we hear the Mandalorian talk for the first time. “I can take you warm or I can take you cold,” he states matter of factly. He’s a man of very few words. 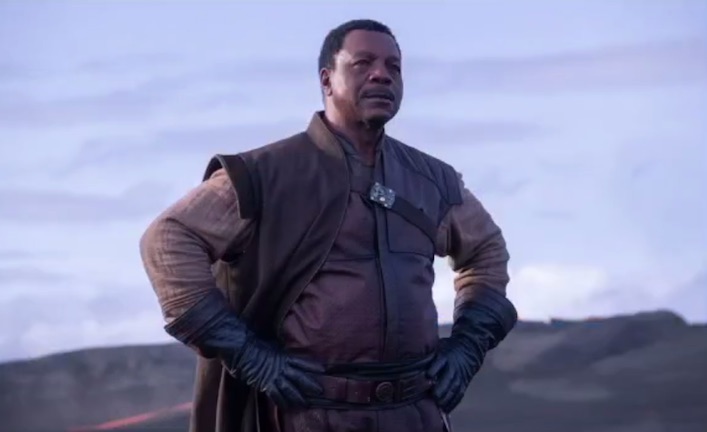 The 27 minutes of footage did a brilliant job of world building with charming little details like the alien who assists the Mandalorian in getting a speeder. How does he call said transport? Well, he uses a very sweet little flute. We get a brief insight into our lead here too as he rejects the first high-tech golden speeder complete with an R2 unit. But two quick words from the masked protagonist–“no droids”–see the gold speeder dismissed.

Why does he hate droids? Does he not trust them? Has he had bad experiences in the past? Are they just too cute for him to function around? Either way, the alien flutist toots on his instrument again and a far more worse for wear red speeder appears, struggling to stay in the air as it’s driven by a bearded human. And, more than likely to the detriment of the Mandalorian and his bounty, without a droid in sight.

As the pair speed across the frozen waste, their driver warns them that it’s “not a good time to be out on the ice” and–although the Mandalorian’s bounty offers to call for a more expensive carrier ship–the pair disembark, ready to get onto the hunter’s worse for wear cruiser. As their driver leaves, a huge monster that looks similar to the Sando aqua monster breaks through the ice, eating him and his speeder whole before heading straight towards the large silver cruiser. Before they can take off, the huge snakelike creature grabs hold of the ship in its mighty jaws. Not one to be fazed by a massive sea monster, the masked hero heads out and uses his pulse rifle to electrocute the beast.

Freed from its grasp, the pair embark on their journey. The Mandalorian is eager to get to their destination, but his unwilling passenger is planning his escape. After attempting to start some small talk, the blue-faced alien decides to try the old “I need the vac-tube” trick which seems to be going well as he wanders around the lower level of the ship and talks about his family, trying to distract the hunter above. Whilst searching for an exit he comes across a collection of people and aliens frozen in carbonite, quipping that he won’t make it home for Life Day (the Wookiee holiday first mentioned in the notorious Star Wars Holiday Special). Pedro Pascal’s rough voice states that “doesn’t look likely” before quickly pushing the alien into his personal carbon freezing machine and trapping him in a classic carbonite block, Han Solo style. 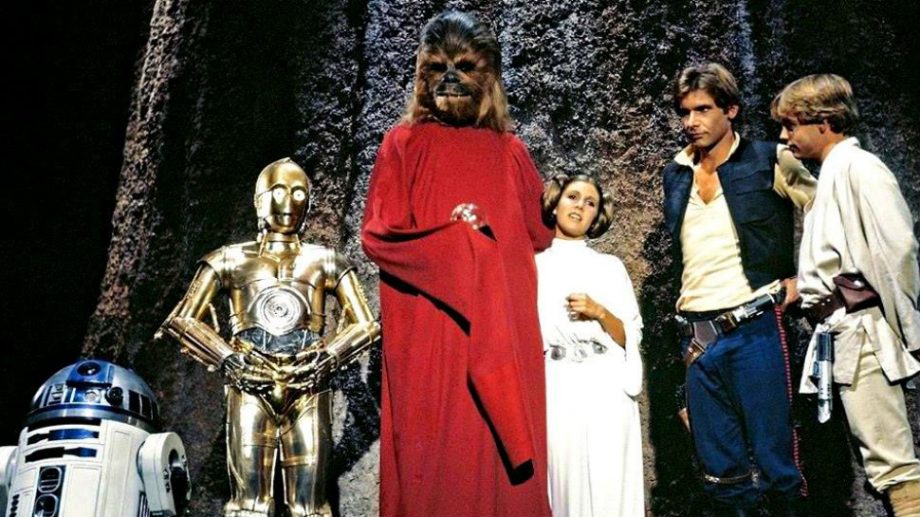 The next sequence was an extended version of the scene shown at Star Wars Celebration earlier this year. Beginning with the carbonite blocks being unloaded from the cruiser utilizing some kind of jet-powered technology, we soon join the Mandalorian in a cantina. It’s here he meets Carl Weathers’ Greef Carga, the head of the Bounty Hunter’s Guild. Despite the unstable economic landscape of the galaxy far, far away, times are tight for everyone; although the bounty hunter delivers all of his targets, Carga tries to pay him in Imperial tokens, which our hero points out are no longer worth anything.

Greef eventually acquiesces, agreeing to pay him in Calamari currency but can only give him half of what he owes, indicating that the lack of work and costly price of bounty hunting will likely play a larger role in the ongoing story. After Carga reveals that he only has a few bounties and the most is only worth 5000 credits, he reveals that he has another secret bounty, one that will be off the books and very costly.

This leads us to the highly-anticipated arrival of Werner Herzog as the nightmarish villain who appears to be a leftover member of the Empire or is at least utilizing the services of a selection of very worn out and dirty looking Stormtroopers when the Mandalorian locates his hideout. At first, the white-suited soldiers are less than happy to see him, with all four drawing their guns. But don’t worry about the masked man, as he “likes those odds.” Herzog quickly calms them down with his dulcet tones and the group gets down to business.

They need the Mandalorian to hunt down a mystery target. They’re 50 years old, there’s no bounty puck, and no tracker. Even though the strange, nebbish young doctor who appears states that the target needs to be alive, Herzog promises that even dead he will still be paid a (lower) fee. We definitely got some war criminal / Nazi experimentation from this sequence and there’s definitely something shady going on which was confirmed only a couple of minutes later. 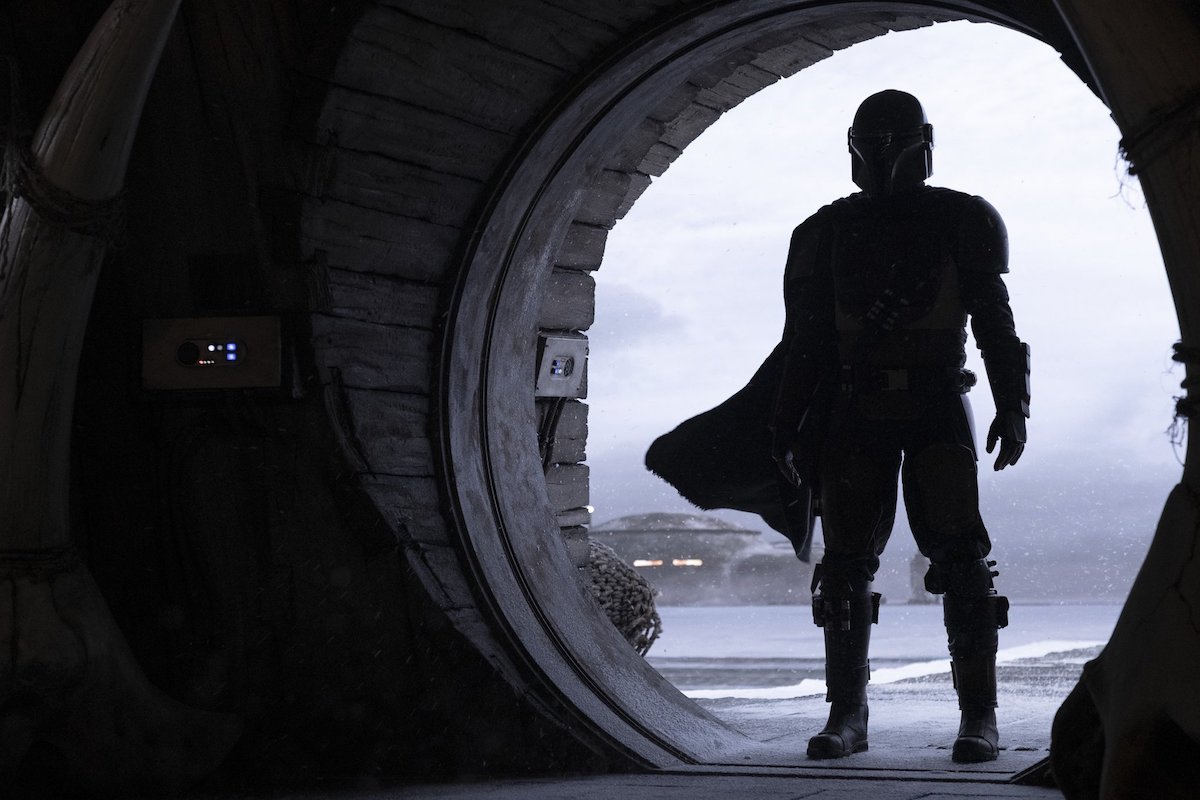 Before we get to that, though, there was an interlude as the Mandalorian took in his surroundings on a desert planet (possibly Tatooine?). He’s keeping an eye on some creatures who look like the classic Star Wars Dewbacks; before he knows it, one has him by the arm. Things are looking dire for our hero until the creatures attacking him are hit with some kind of electronic charge. The Mandalorian has been saved by an unknown orange alien riding on of the prehistoric creatures, who asks in a familiar voice, “You’re a bounty hunter?” When he gets an answer in the affirmative, he replies with “I’ll help you. I’ve spoken.” Looks like the masked hero has a sidekick.

The next scene threw us straight back into the relationship between Pascal’s armored warrior and the man who hired him, but for spoilers’ sake we’re going to hold off from revealing too many secrets and will just say it was an impressively choreographed action sequence that had our audience gasping, cheering, and audibly groaning as the clip ended.

The final scene that we saw features a really cool fight sequence between the Mandalorian and a rhino-like creature, which he wakes after venturing into a dark cave. After the monster emerges, the pair get into a battle of muscle and wills with the Mandalorian using everything he’s got to try and survive his interaction with his immense foe. Just as it seems like the fight is done and all might be lost, Pedro Pascal’s hero manages to find his feet to face down the huge creature with nothing but a small blade. Before we could find out the fate of the masked hunter, the footage was over. But it certainly promised an epic battle between man and beast.

Here’s Everything Coming to Disney+

We’ll find out how he fares when The Mandalorian hits Disney+ on November 12, 2019.