A secret: usually, when you see a miniature that looks worn and battered on your local wargaming table, the look is the product of studiously messing things up. All those dings on the Imperial Knights and mud on the feet of the Guild Ball players is meticulously, painstakingly placed there. Disaster through precision, chaos through order.

I recently got into  Gaslands, after a good year of hemming and hawing over whether to pull the trigger. I was fully expecting to do what I do with  40k,  Dracula’s America, and  Age of Sigmar: using practiced techniques to get all those grubby details of what a real Space Marine or whatever would look like after going through hell. Once I had my cars, I didn’t get that. I got something different, unexpected, and kind of cool.

When I got home with my first batch of Hot Wheels cars–a dollar a car at your local shop, a price point which is important–I stared at them trying to figure out what to do. What I quickly figured out is that the nature of toy cars, with their blocky builds, low cost, and largely monocolor paint schemes, liberated me to take the techniques I already use and go nuts with them. With so many companies using CAD for design and high-quality plastics, the details of modern miniatures risk being covered up if you go too hard with the mud and gore. Worse yet is when you get those highlights just so and screw up your weathering powders, necessitating hard work to recover the miniature.

One of the first things I felt free to do was salt weathering. This is a really cool technique which is hard to do without the nicely sized flat areas on toy cars. It’s as simple as it is effective, though it does require an air brush. You do a rusty colored basecoat on your miniatures—I used an alcohol/rust weathering powder mix, but most people I’ve seen online use a brown spray—and then wet small areas with a brush. While the spots are still wet, sprinkle kosher salt on the damp bits. The salt sticks in irregular patterns, which you leave overnight to dry. The next day, airbrush the miniature your desired color, dry again, then use a light touch and warm water to remove the salt. That reveals the rusty color underneath in natural patterns.  (You can achieve a similar effect without an airbrush using drybrushing and hairspray as well.)

This sounds complicated, but it’s not. It’s really easy, and it looks great. Since I had cars which had to look post-apocalyptic and had no great money investment on my end, I could go pretty wild with salt weathering. The results are quite nice, though I didn’t do it to every car. 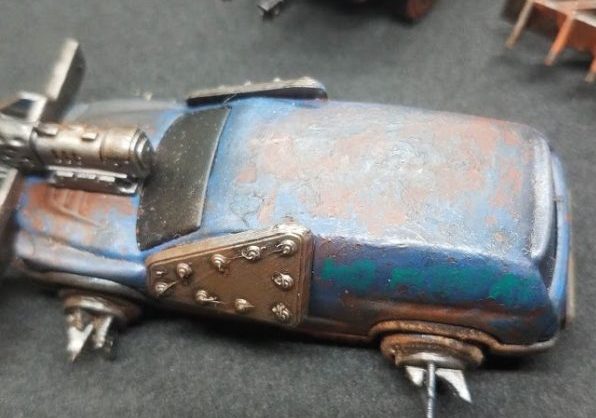 Another combo of techniques which I found liberated are some of the basics: washing and using weathering powder. Some of the cars had a paint job out of the box which I thought was cool, but wouldn’t do with that new car look. I sprayed those cars I wanted to use as is with a matte varnish, to give the surface some basecoat style grip, and then smeared brown and black inks over their entire bodies. There wasn’t a lot of care, just reckless abandon with wet stuff. The results, again, look great and it took minutes to do, outside the drying process. 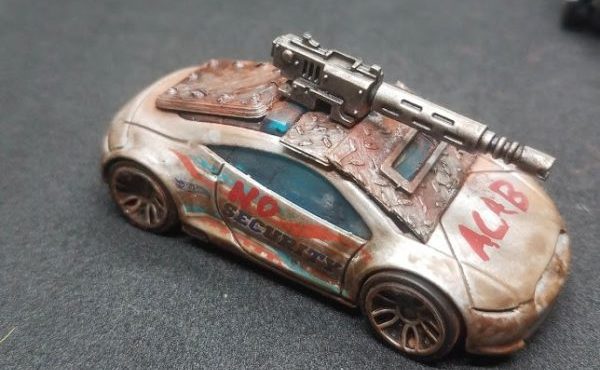 Weathering powders are the secret sauce in many a painter’s arsenal, but they’re finicky to use. I love them and I still haven’t mastered them. If you don’t bind them, they’ll eventually wear away. If you do bind them—usually with alcohol or artist’s spirit—your miniature is long-term messed up if you don’t get it right. It’s high pressure, as much as I love it, and it’s not for everyone.

Once again, with Gaslands cars I felt liberated. The lack of detail and depth became the excuse to go crazy. I did soot, mud, and rust. And while I may do all of those things in my day-to-day painting, it wasn’t like it was here. It was joyous, exactly what I always wanted using weathering powders to be like. 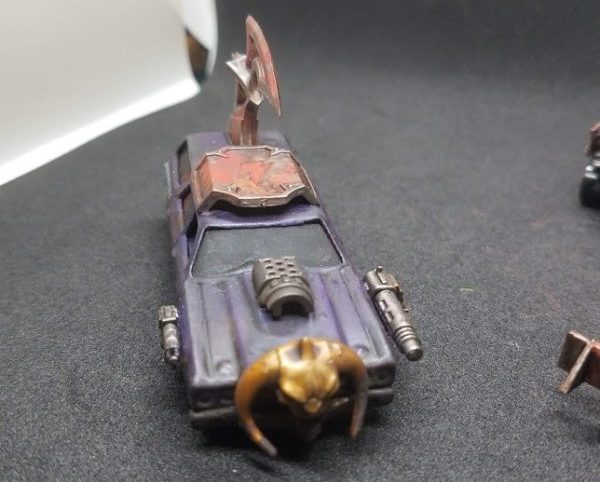 In fact, joyous is a great word to describe my experience with Gaslands modeling and painting. This isn’t to say that I don’t find joy in more precise work, but it’s a different kind of joy, the joy of exactitude. There’s something delightfully old school about the Gaslands ethos, where cheap costs and imagination replace boxed sets and instructional videos. And, again, I love all the current stuff (certainly it’s made me a better painter), but there’s something about dwelling in the moment with your painting which feels so out of step with the styles in vogue that makes my workspace smile. All I can say is get some cars and beat them up. You’ll have fun doing it.