For two years, Luke Skywalker’s role in The Last Jedi has not sat well with a certain sect of Star Wars fans. Their argument is that Luke’s failures and self-imposed exile as shown in the sequel trilogy is a smear on his character, and that his Joseph Campbell-style “Hero’s Journey” as initiated by George Lucas is tarnished by this portrayal. The thing is, Luke’s story in the Sequel Trilogy is one hundred percent in keeping with the one heroic myth that Luke Skywalker most adheres to: the myth of King Arthur and Camelot.

The legend of King Arthur has been around for some 1500 years. And there are many, many versions of it. But the best known is Sir Thomas Malory’s Le Morte d’Arthur, first published in 1485. Malory combined all the best known myths and legends about Arthur and distilled them into one narrative, and that has been the basis for most Arthurian books and films ever since. George Lucas was clearly influenced by Arthurian legend when creating Star Wars, and not just with Luke. The Jedi Council is made of 12 knights who gather in a circle, for instance, like the Knights of the Round Table. That’s not a coincidence.

Most Arthur-themed films tend to cover one aspect of the legend, and gloss over the rest. But there’s one movie that encompasses most of the broad strokes of Arthurian legend: John Boorman’s 1981 fantasy epic Excalibur. The film covers Arthur’s life from birth to death, and even gives a decent helping of the story of Arthur’s father, King Uther Pendragon. Boorman does make some changes to Le Morte d’Arthur to be sure, but it is still by far the most accurate representation of the myth on film. So for my comparisons to Luke Skywalker, I am going to draw from and cite Excalibur first and foremost.

In the film and in legend, Arthur’s father Uther (Hereditary’s Gabriel Byrne) was a powerful knight and a skilled warrior, who nevertheless made some very bad life choices. Merlin (Nicol Williamson) gifts him with the mystical sword Excalibur, hoping that with it he can unite the land. But Uther’s lust for power, and for the wife of his ally the Duke of Cornwall, led him down a dark path. Anakin Skywalker in the prequels is very much in the Uther mold, and his fall to the dark side also centers around an unhealthy possessive attachment towards a woman. Pendragon seduces the Duke’s wife, Igrayne, and she bears him a son named Arthur.

After Uther’s death, Merlin realizes that it is Arthur who is the true future king. He spirits him away from his mother and his young half sister Morgana, and sends him to be raised as a simple peasant in the countryside. This is very similar to how Obi-Wan takes an infant Luke to be raised as a farm boy on Tatooine. Unlike Arthur, though, Luke has a twin sister. But since Arthur has a slightly older half-sister who is also royalty, there is a similarity there too.

When Arthur comes of age, he alone is able to pull Excalibur from the same stone his father plunged it into before his death. Merlin then informs Arthur (now played by Nigel Terry in the film) of his true lineage and destiny, and explains to him about his father…without getting into too much detail. All of this is echoed by Obi Wan giving Luke his lightsaber in A New Hope, and explaining that his father was a great Jedi Knight once, while also skipping certain truths. Much like Merlin and Arthur, Obi-Wan is an old wizard who sets Luke down on his path to becoming a leader.

As we know, over the course of the Original Trilogy, Luke destroys the Death Star and helps bring down the Empire. Similarly, under Arthur’s leadership, the foreign invaders are repelled from Britain, and he becomes King. He establishes the glorious kingdom of Camelot, and the land is united. The end of Return of the Jedi suggests the same thing. With the Empire gone, a New Republic will be formed and everything will be made right again. And for a long time, that’s pretty much where the official canon story of Star Wars ended.

However, that’s not where the Arthurian myth ends. After years and years of peace and prosperity, Camelot falls into complacency. Due to Arthur’s neglect, his wife Guinevere falls in love with her husband’s best friend, the roguish knight Lancelot. The devastation of their affair causes Arthur to sink into a deep depression. During this time, his half-sister Morgana (played by a young Helen Mirren) seduces him and becomes pregnant with his child. She gives birth to a son named Mordred. 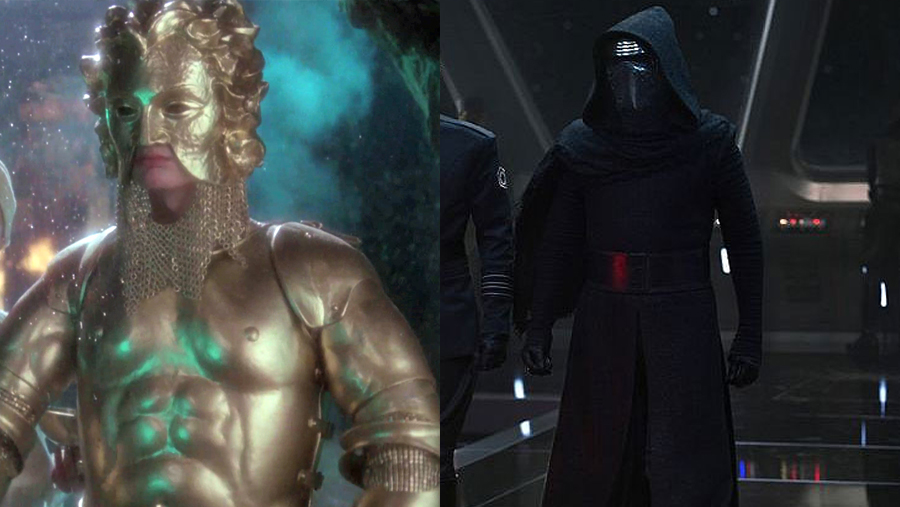 Obviously, this is where Star Wars differs from Arthurian legend the most. Lucas was never going to go that icky with his big family-friendly saga. Luke obviously never has sex with Leia (thank the Maker), and she is his friend, not an enemy. But before he knew she was his sister, there was undeniably a love triangle thing happening with himself, Leia, and his BFF Han Solo. So shades of the famous Arthurian love triangle do sneak into Star Wars too, sort of. Nevertheless, Ben Solo is still both Luke’s nephew and his surrogate son in a way, as he essentially raises him. It’s a less gross version of Arthur and Mordred’s relationship.

As Arthur sinks further into depression and isolation, the kingdom of Camelot withers with him. In Excalibur, Merlin says to him, “You are the land and the land will be you.” This applies to the Star Wars galaxy as well. After Luke’s failure with Ben Solo, he retreats to Ach-To, essentially to die. But as the opening crawl to Episode VII tells us, “In his absence, the First Order rises.” By cutting himself off from the Force and retreating, evil is allowed to flourish once more.

In Excalibur, a young idealist Knight named Percival manages to break through to the ailing King Arthur. Percival (although in most myths, it’s Sir Bedevere) grew up on stories of the mythic King. To him, Arthur is a living legend. This is very similar to how Rey sees Luke in The Force Awakens. It is she who ultimately gets through to Luke, and convinces him (with some nudging from Yoda) to live up to his legend status and confront his evil nephew once more in final battle.

Mordred is very much the basis for Kylo Ren. He grows up jealous and covetous of Arthur’s kingdom, and feels entitled to it all. Not in the film but in some tellings of the legend, Arthur even tries to kill Mordred as a child. When Arthur confronts him, he offers Mordred his love as a father. Mordred’s responds with, “That’s the only thing of yours I don’t want.” Arthur and Mordred battle, and the two kill one another in the battle of Camden. In Excalibur, as in many retellings of the story, Arthur is whisked away to the isle Avalon. Probably to die, but also possibly to transcend into a higher existence. It’s never made clear in some myths, and Excalibur leaves it vague.

Luke’s final confrontation with Kylo in The Last Jedi is almost exactly like Arthur’s final fight with Mordred. Like Arthur and Mordred, Luke emerges after a long exile to finally become the legend others regard him as. Much like Arthur, in his last act Luke realizes his life is not meant to be an ordinary man’s life, but the “stuff of future memory.” Something that will inspire others to greatness themselves. Like Arthur, Luke transcends into something greater than himself.

Obviously, there are changes made in the translation from one story to the other. It’s unlikely that Kylo Ren will die without having been redeemed in some fashion in The Rise of Skywalker, as redemption is too baked in to what Star Wars is all about. Mordred never gets as sympathetic a portrayal. But for all of those out there insisting that Luke’s arc betrays some kind of heroic principal set in mythology, I suggest cracking open a book on Arthurian legend. Or maybe even just watching Excalibur. Because he template for Luke’s journey has been around for over 500 years.