“Luke Skywalker has vanished.” Those were the words that kicked off the opening crawl of Star Wars: The Force Awakens, and it literally took the entire movie before we saw Mark Hamill’s iconic character make his return. Given the level of intrigue involved in finding Luke’s hiding place, many fans assumed that the first Jedi Temple onÂ Ach-To was in some far off location that wasn’t easily accessible. The Force Awakens briefly showed its place among the stars in a navigation chart, and it may have meant that our previous assumptions were wrong. Today’s Nerdist News is taking a crash course in Galactic Basic and uncovering what Ach-To’s location could mean for The Last Jedi.There are potential spoilers ahead for The Last Jedi! If you don’t want to get bitten by Porgs or discover more details about Ach-To, then this is the right time to make a Kessel Run of your own! 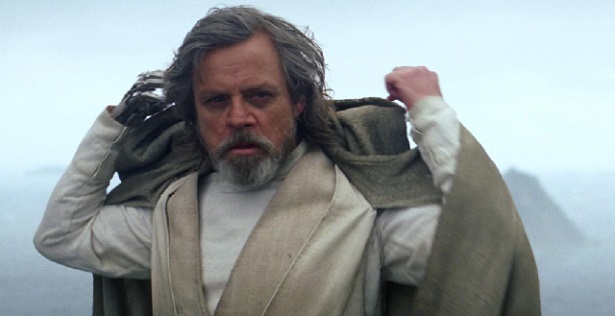 Join your host, and the Resistance’s resident astronomer, Jessica Chobot, as she walks us through a solution that was apparently in front of us the entire time. First off, how many of you can read Aurebesh? Probably not too many. It hasn’t caught on like Star Trek‘s Klingon language, but one fan’s ability to read Aurebesh has led to an intriguing revelation. They took the time to translate the writing on the star chart from The Force Awakens. And it turns out that Ach-To isn’t off on the Galactic Rim, it’s just a couple of light years away from planets like Naboo, Dagobah, and Hoth.What separates this from other Easter Eggs is that Lucasfilm’s Pablo Hidalgo was unexpectedly cagey when asked about this discovery. He said only to ask him about it again after The Last Jedi is released. That makes us believe that Ach-To’s location will be a plot point in the film, and the First Order’s inability to find the planet may also be addressed.Are you intrigued by the long-term planning behind this revelation? Ignite your lightsabers and let’s discuss!